Thanks to the proliferation of smart devices, cloud-based services and more fluid content creation and distribution systems, technology is fundamentally changing the way we learn. Not only is it easier and cheaper than ever before to find, create and consume learning content, but with better digital video solutions storming into every classroom, learning is actually becoming an enjoyable experience.

While the web is now brimming with video-based learning tools, the majority of today’s popular platforms are focused on academic experiences and use cases, offering digital versions of classes, courses and lectures. Curious launched last summer to give life-long learners, hobbyists and curious minds a little video-based platform and marketplace to call their own.

With short, “bite-sized” video lessons from over 700 teachers on topics that range from proper sewing technique and Pilates classes for beginners to advanced MS Excel wrangling, Curious is looking to be the more targeted, navigable and interactive version of YouTube — for continuing education. In the other words, your go-to destination for perusing and discovering cool “how-to”-style content on any subject, via the Web or mobile.

While $7.5 million in backing from Redpoint Ventures and former Apple Chairman Bill Campbell and others at launch certainly helps, if Curious hopes to keep pace with the bigs — and the increasing demands on (and for) video-based learning platforms — speedy scaling is key. As a result, the startup has been hustling to expand its marketplace, by building out its lesson library, increasing the depth of its subject areas and gradually adding functionality around the edges.

Mobile has also been a key early focus for Curious, given how much the learning experience experience for “how-to” content, especially, can be improved by mobile access. If you’re using Curious to learn how to fix your car’s engine, much of its utility goes out the window if you can’t bring the instruction with you.

Curious launched its first iPad app in August, and with its native iPhone app recently following on its heels, Curious now offers supports for most of the iOS ecosystem and allows users to access its library of micro-video lessons while on the go.

Its iPhone app, for example, has a few features that, while far from mind-blowing, are pretty essential for consuming mobile video lessons. Through the app’s LearnSync feature, users can pick up lessons where they left off, regardless of where they initiated the lesson, indoors, outdoors, on a train, on a plane, in Spain, on desktop or mobile. You can start watching a lesson at your desk, then go make some threatening calls to your Bitcoin broker, and pick it back up on your phone during your Lyft ride to your local watering hole.

It’s K.I.S.S. functionality like this that the Curious founder credits for the fact that one-third of its signups now happen via mobile. On top of that, the company is also seeing “near triple-digit month-over-month growth,” while its lesson library has grown to over 5,000 videos, Kitch says. And, as a result, Curious thinks it’s ready to take the next step.

A big part of Phase Two, and the ever-present elephant in the room for education startups — and even for those on the “continuing” side of learning — is “proving out the monetization potential” of its how-to learning model, the founder says. To help it do that, Curious is taking on $15 million in Series B financing.

The investment is led by GSV Capital, with participation from its existing investors, including Redpoint Ventures, Bill Capbell and Jesse Rogers. As a result of the new round, GSV Chairman and CEO Michael Moe will be joining the startup’s board of directors. 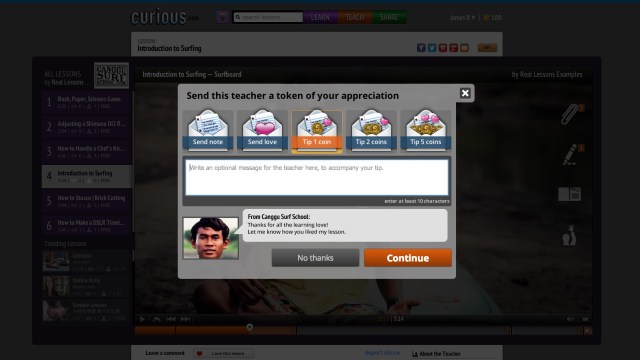 With the new capital under its belt, Curious isn’t waiting around to get those revenue channels flowing. Today, it also adding a couple of new revenue-generating opportunities for its growing stable of 700 teachers. Along with offering its instructors the ability to sell single lessons, teachers can now bundle lessons into playlists — i.e. courses — to provide learners with a discount on lessons ordered in a series, around a specific goal or theme.

In addition, Curious now gives learners the ability to provide a little monetary gratuity to teachers at the end of lessons, as a little symbolic, digital way to say “thanks, teach and keep up the good work.”

Once a user completes their lesson on, say, how to properly cook an artichoke, they will be able to send their teacher a note and be given the option to include a digital “Tip” consisting of one, two or five “Curious Coins.” The digital currency-based gratuity is accompanies by a “Love this Lesson” icon, which is in turn displayed on the teacher’s profile.

Curious has long said that it isn’t interested in just being a one-sided, consumer-only learning platform with a big, old affordable library of how-to content, but a service provider that supports the other side (teachers) with tools to both share and monetize their lessons. The startup’s new “Courses” package essentially bundles lessons in the sequence they were likely already in (or should have been in) so that learners can master skills and topics in a more comprehensive, holistic way. Curious is making 50 of those Courses available at launch, and plans to expand its roster quickly over the coming months.

Again, Courses are comprised of topics that require multiple, sequential lessons for the learner to acquire the skill, Kitch says. So, while Curious has previously offered users the ability to browse “related lessons” as they go, content can now be presented in a specific order and purchased as a bundle for a discounted rate. According to Kitch, prices will range from $9 to $49 per Course, contain between five and 30 lessons, and like all Curious lessons, belong to the learner for life once downloaded.

Curious is certainly getting down to business (see what I did there?) without wasting any time. In comparison to Coursera’s more measured monetization efforts, or how long it’s taken a platform like Edmodo to start generating significant revenue, Curious appears to moving quickly. First add a big chunk of other people’s money and capital, and then turn right around and make some of your own — not a bad formula if you can swing it.

Below, you can find our recent TCTV interview with Curious founder Justin Kitch, in which he demoes the startu’s new iPhone app.