A couple days a week, 25-year-old Brian Clark (pictured above to the left) takes the Muni’s T line in from Bayview, where he lives in a house full of other founders through the NewMe Accelerator program.

Yes, he’s tinkering around with startup ideas and he moonlights at hackathons for rent money.

No, he’s not some entitled techie douchebag.

He takes the train in several days a week because he teaches free after-school classes on web development and programming to students across San Francisco’s public schools. Even though he jokes every once in awhile about how broke he is, Clark has spent hours designing and developing curriculum for the new San Francisco non-profit running these classes, MissionBit.

Last semester, MissionBit’s students made a Nazi Zombies vs. Robot Dinosaurs game, a chat client and another program that visualized audio tracks through Philip Hue lights. About 90 percent of them had never written a line of code before they started.

MissionBit brings in developers from the industry to teach pro-bono classes and they’ll have 70 middle and high school students this semester. Only five of the 17 high schools in the San Francisco Unified School District offer computer science classes, meaning that students are missing out on learning highly employable skills in web development despite living in the global capital of the technology industry. 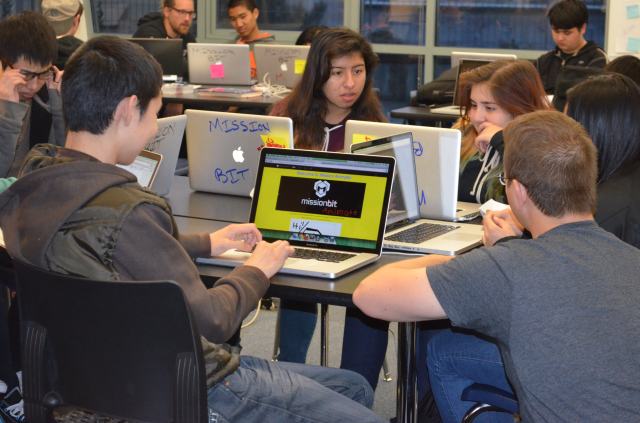 “Initially, I was just frustrated with public school education and I was looking for a way to give back and put energy into improving it,” said MissionBit’s founder Tyson Daugherty.

Last August, Daugherty partnered with another San Francisco non-profit called Out of Site that already had a relationship with the school district to offer free after-school arts classes. In their first semester last fall, they started with a beginning programming class for 15 students. Demand was so overwhelming that they ended up with 25 kids on the wait list.

This semester (their second one), MissionBit has more volunteer instructors than it can handle.

“The amount of good will that is being demonstrated from these awesome technologists and some very high-powered people is pretty inspiring,” Daugherty said.

In a class I ended yesterday, there was one instructor for every two students.

“Why are we here?” asked Matt Wescott, the lead instructor for that day.

“To learn,” chimed in one of the students. It was the first day, so students dreamed up applications that could help them get to know each other better. One was for Google Glass, while another was a more basic online social network.

Eight-nine percent of MissionBit’s students from last semester had never written a line of code and more than 40 percent of them are female. (In contrast, only 21 percent of Computer Science AP test takers in California were women last year.)

They sign up for the classes voluntarily and Daugherty says MissionBit designs its curriculum so that it’s complementary to the district’s official computer science classes.

MissionBit sits in between many other efforts to expand computer science education; it’s much more local and on-the-ground. In contrast, Hadi and Ali Partovi’s Code.org is a much broader effort to change the perception of computer science in education nationally.

“They’ve got the mega-stars,” Dougherty said of Code.org’s videos, which feature Bill Gates and Mark Zuckerberg. “They’re tackling it from the top-down, making sure that computer programming is recognized as core science and technology education.”

If you want to be involved with MissionBit, they’re running an Indiegogo campaign that ends later today. So far, they’ve raised more than $34,000. While they don’t need instructors this semester, they’ll be looking to scale up even further next semester and they’ll be needing donated laptops and laptop chargers too.