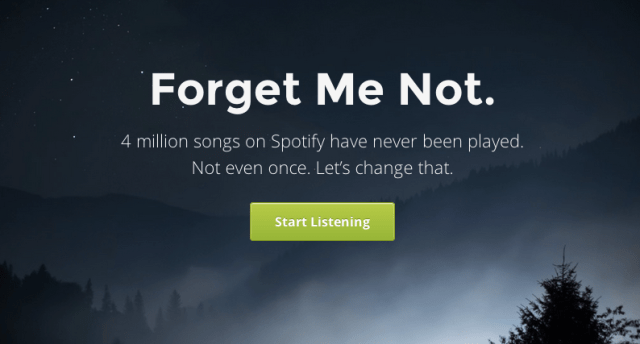 Indie music? Pffft. Indie music is way too main stream, man. All the cool kids are into music that no one has ever heard.

Meet Forgotify. Forgotify tears through Spotify in search of songs with zero plays, playing only the songs that no one else has ever listened to.

Certainly, there can’t be many of those, right?

Wrong. According to data that Spotify released in October of last year, 80% of the 20-million-or-so songs on Spotify have been listened to at least once. That means 20% of the songs have not. That’s 4 million songs with zero plays.

Of course, there’s… probably a reason that most of these tracks have zero plays. Spotify isn’t necessarily known for setting the bar to entry very high, so a number of these tunes sound like amateur covers of a KidzBop cover that was, itself, based on a rough recollection of a song given by someone who’d heard it once, years ago. That is to say, most are not very good.

Some, though, are perfectly fine. When you find the (increasingly rare) gem, it’s like a teeny, tiny victory over the universe. You’ve found the signal drowning in the noise.

One crazy thought: when you listen to a song on Forgotify, it increases that song’s play count… meaning that, if this thing is working correctly, no one will ever hear it again. Each experience becomes ephemeral.

You can find Forgotify here. If you actually want to listen to a track, you’ll have to be signed in to Spotify.

[Meanwhile, the radio in my room is playing “Royals” by Lorde for the 87th time this morning.]