Following tests of Twitter-style Trending Topics on the web and mobile in August, Facebook today officially launches a redesigned “Trending” section on its web homepage’s sidebar in the US, UK, Canada, India and Australia. The richer design shows personalized lists of the most mentioned words and phrases of the moment with short explanations of why each is blowing up. A click-through leads to a Page of mentions by friends, Pages, and public posts by anyone who lets people “Follow” them.

If Facebook users find the Trending section atop the right sidebar of their homepage useful, it could encourage public sharing, drive return visits, and most importantly — make Facebook better known as a news source for current events. The social network has been in a heated battle with Twitter for that distinction over the past few years.

“Trending” will roll out to all users in the specified countries over the next few weeks, and Facebook continues to test a mobile version.

The explanations make Facebook’s “Trending” section a bit busier than Twitter’s simple list, but could also make it more immediately accessible. Sometimes it’s tough to tell what a Twitter Trending Topic means or why its popular, such as today’s “#SuperDraft”, which refers to the Major League Soccer player draft. That leads to clumsy digging through the hashtag’s tweets, or a web search for the term.

Facebook’s version of Trending doesn’t just list “24”, it explains that “Fox Sets May 5 Premiere for ’24: Live Another Day'”. While you might know Cristiano Ronaldo is a famous soccer player, if he trends on Facebook, it’ll tell you why, such as “Cristiano Ronaldo wins Fifa Ballon d’Or after stellar year at Real Madrid”.

Facebook tells me “The description next to the topic is actually a headline that provides context around the topic and what is causing it to trend. We have rules in place that work to select concise, accurate, informative headlines.”

Facebook is also taking advantage of its wealth of structured data about what people Like and who they’re close to so it can inform its Trends. Facebook tells me “Topics are personalized based on things you’re interested in and what is trending across Facebook overall.” 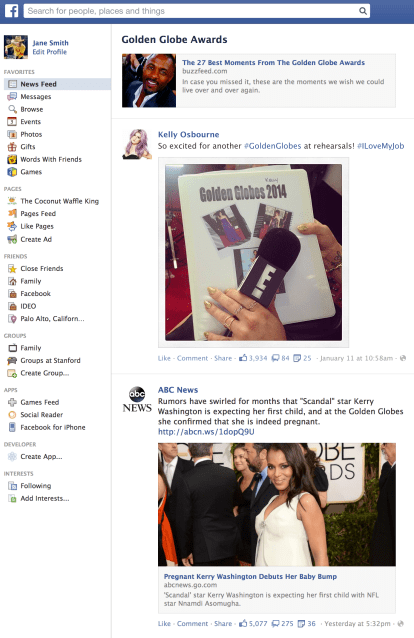 Once you click though, though, Facebook’s Trending pages (seen above) look a lot more basic than Twitter’s. Facebook shows a feed of links and posts by Pages, celebrities, and public updates from users who have turned on the “Follow” feature to let non-friends read their public posts. But they all look a bit the same. Twitter’s Trending pages have more style, intelligently highlighting compiled sets of photos and people you should follow as well as posts mentioning the topic.

And since Twitter has been long-known as a place for current, and since most content on Twitter is public and therefore eligible, Twitter’s Trending Topics pages may be deeper and move faster alongside breaking news.

The fact is that most people don’t post publicly on Facebook and don’t have “Follow” turned on, so what appears in Facebook’s Trends isn’t actually what’s popular with people.

Overall, Facebook’s Trends seem a bit more immediately helpful and personally relevant, but Twitter’s pages will likely feature much richer content that actually reflects the thoughts of the common man, not just celebrities and news outlets.

I just got access to Trending and here are my initial thoughts. While the Trend descriptions are very useful, I sure didn’t see much personalization in the Trends I was shown. I’m not that into sports, Like/follow almost no teams or athletes, and never share sports links. Yet two of the three immediately visible Trends on my home page were athlete scandals.

After expanding the list to the full ten Trends, I got three more sports stories I wasn’t much interested in, though it did show a few about musicians which I found more interesting.

My fears that Trends would be dominated by news outlets and celebrity posts rather than true public opinion were confirmed. After scrolling through several reams of each other the 10 trends, I found most of the pages were overrun with news sites sharing the same links or copy-cat takes on current events. I only saw one post by a friend the whole time. 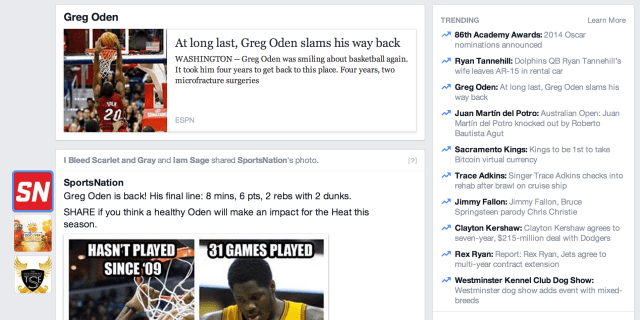 When there were public posts by normal users, they felt somewhat out-of-place or irrelevant. Facebook’s “Share” button for status updates is much less used than Twitter’s retweet button, so great content from people with small audiences doesn’t get bubbled up. Instead, the public user posts in Facebook Trends seem like scattershot.

Without a strict adherence to reverse-chronological order, Facebook Trends seem more like an overview of current events from 10,000ft, rather than up-to-the-minute commentary. That’s a dig at Facebook if you’re judging it by Twitter’s terms, but really the two takes on Trending may end up serving different purposes.

Facebook Trending aggregates the headlines of the day, while Twitter Trending Topics check the pulse of the moment. Both have their uses.

This is obviously a very early version, and Facebook has plenty to improve on. But no matter what it fixes in the product, Trends won’t be truly great unless it can get more users posting publicly.

…And that’s what Facebook is desperately trying to do. Mark Zuckerberg has been tearing pages straight out of Twitter’s playbook over the past year with the launch of hashtags, verified profiles, and embeddable posts. It’s also testing Twitter-style reverse chronological display of News Feed posts, and is giving marketers and partners more access to its firehose. Plus it recently acquired public sports data filter SportStream.

All these efforts are designed to make Facebook a place people come to discuss what’s happening in the world right now — not just share what they did yesterday with friends. Facebook has seen Twitter gobble up enormous amounts of engagement during TV premieres, award shows, sport matches, and world news events. It wants more of that discussion happening within it’s where it can analyze the data to improve its feed and show ads.

In an interview at Stanford on Tuesday, Zuckerberg said one of Facebook’s big goals after reaching one billion users is creating a unified model of understanding the world that’s powered by artificial intelligence. That effort can only reach its full potential if it knows what the world is thinking about the biggest events of the day. “Trending” is both one of the first by-products of this quest, and a way to lure the public discussion into its walled garden.