Build by Pingguo, a startup based in Chinese tech hub Chengdu, Camera360 is already one of the world’s most successful photo editing apps with over 180 million users in more than 200 countries who take about 80 million photos each day. But it has faces strong competition from other photo editing apps like Camera+ and Afterlight, all of which are aimed at users who want more advanced editing features than filters.

So Camera360 is now focusing on its target growth markets, which co-founder and marketing director Gary Gu tells me include India and countries in Southeast Asia, particularly Indonesia, Thailand and the Philippines.

Gu says that Camera360 is sometimes referred to as the “Instagram of China” but there are key differences between the two apps. For one thing, Camera360’s focus is on photo taking and editing, not sharing, a space the startup has no plans to enter. Instead, its goal is to provide editing functions that “put art in your hands,” as Camera360’s slogan says. The company has four apps: the free Camera360; HelloCamera, a paid version with more features; Movie360 for making videos; and Pink360 for selfies. In total, its editing suite includes more than 100 functions.

Nifty features that make Camera360, the company’s flagship product, standout include its “EASY” camera, one of eight cameras in the app. EASY auto-detects what kind of scene (nightlife, scenery, portrait, etc.) you are photographing and automatically applies an effect so you can skip the editing process.

It also has the ability to build photo collages in-app, a “face fix” feature that includes functions to help you quickly make self-portraits more flattering by slimming your jawline or widening your eyes, and filters that give your photos a pop art look (in addition to the usual aged film or distressed-look overlays that other photo editing apps have). Camera360’s social-sharing features are tailored for its mostly China-based audience, which means the app is linked up to popular microblogging site QQ and WeChat, both of which are run by Internet giant Tencent.

Its apps are already a hit in its home country, but Pingguo is preparing to release a major update for Camera360 next month as it expands its sights to the rest of Asia. Gu says Camera360 wants to take advantage of the strong adoption of smartphones and social media in countries like Thailand, where Instagram is especially popular. 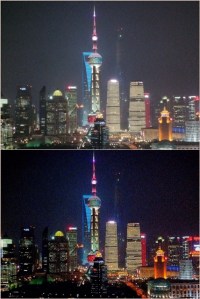 Pingguo currently monetizes through advertisement partnerships that are tailored to the Chinese market. Instead of using banner ads, for example, the company creates sponsored features like themed frames that are tied into the release of movies or fashion products.

In order to compete with other photo-editing apps, however, Camera360 is looking at additional revenue streams. Gu says the company plans to offer cloud services so users with don’t have to store photos on their mobile devices, a selling point for users with limited memory on their mobile devices. Providing cloud storage will also let Camera360 tap into the big data market, though Gu says that user privacy is protected because the company doesn’t look at the content of each photograph. Instead, it gathers data based on where each photo was taken, where users opened the app, and what kinds of devices and operating systems they use.

In China, Pingguo plans to start rolling out a printing service so people can order albums, calendars, T-shirts and other physical products.

“In the U.S., Shutterfly has been very successful, so I think that market opportunity is huge. By giving our users this service, we can provide them with a complete photo-taking experience,” says Gu. Orders will launch in China first before Pingguo gradually localizes the service for other markets.

Another revenue source for Camera360 is its software development kit, which is offered to “premium” partners, and API. Companies that already use Camera360’s SDK include major Chinese tech companies like Tencent and Xiaomi, as well as Nokia, which has added its photo-editing features to its Lumia 925 and Lumia 1020 models, both of which have sold well in China, Indonesia, Thailand and India.

Gu says that he hopes his company will score even bigger partners next year. “Our goal is for international companies, like Yahoo’s Flickr and Twitter, to start using our SDK,” he says.