Cover is bringing its situation-aware lockscreen to more Android users today after its beta test launch six weeks ago. It’s now available in the Google Play store to Android 4.1+ users in the US, Canada, and Europe. Cover’s 100 new improvements include cutting down battery drain and being better at detecting if you’re in your car, at home or at work so it puts the right apps on your lockscreen.

“The big question I had personally was whether users would understand the concept of the lockscreen” Cover founder Todd Jackson tells me about what he’s learned from its thousands of beta testers since October. “Turns out they do. We were specifically focused on building a lockscreen rather than a launcher. They like the flexibility of being able to use Cover with other launchers.”

Steamrolling over a user’s existing customization was sticking point that hurt Facebook Home’s early adoption. By acting as an interaction layer that floats on top of a user’s Android homescreen, Cover has found people more willing to adapt to how it radically alters their lockscreen. 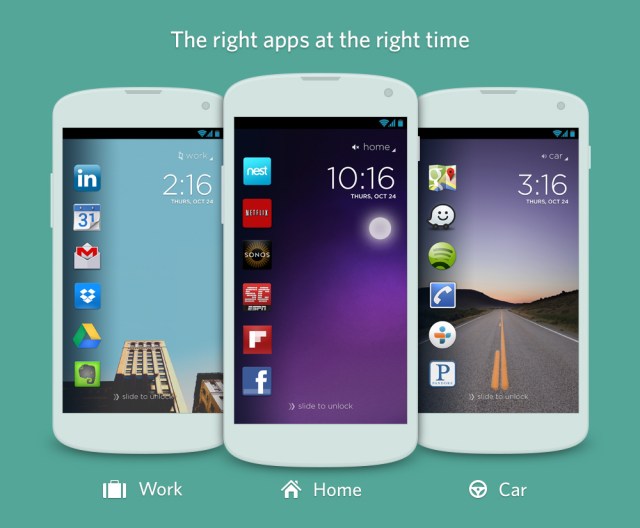 Check out my launch story on Cover for the full-rundown of how it works.

To recap, though, Cover can recognize when you’re at home, work, or in you car, and shows you the apps that fit that situation. The suggestions are based on crowdsourced data at first, like that people often use Dropbox at work and Netflix at home, but Cover learns what you use in these situations too and adapts its lockscreen shortcuts. Cover’s Peek feature lets you quickly look inside your apps, and its fast-app switching drop-down menu makes it a breeze to bounce back and forth between maps, messaging, or what have you.

You can watch our quick Cover demo and my interview with Jackson in the video player below.

To get people to surrender the most visible part of their phone to Cover, it had to make some improvements. “Cover is a different app than most apps. Most you just forget about” Jackson tells me, noting there’s little risk to one more download. “Cover? You either love it, or you hate it and you uninstall it. When you’re building an app that replaces a core aspect of their phone, the quality bar is really high” says Jackson.

That’s why Cover used the Android’s beta system. Jackson admits it wasn’t perfect, as it created friction to downloading Cover on its big launch day. Some users griped about having to use Google+, or never visited their G+ profile so they missed their invitation to download Cover once it was their turn. But the app just wouldn’t have been ready for prime time without the detailed feedback and bug reports the Android beta testers offered. 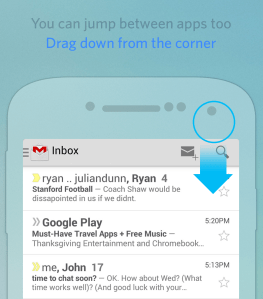 Cover discovered that the number #1 thing people cared about was battery life. Jackson explains, “The beta helped us learn what are people’s thresholds. For most people, if Cover is responsible for more than 5% of their battery usage, they’ll uninstall it, so we worked really hard to get it under 5%.”

Other improvements include more accurate motion sensing algorithms for detecting you’re in your car, KitKat compatability, more stable app peeking and switch, new tutorials for how to use app switching and operate Cover with pincode security turned on, more customization, and the ability to share your Cover set up to Facebook/Twitter/Google+.

Another frequently requested feature was the recommendations of apps other people use at home, work, in the car, or with their headphones plugged in. That validates a big potential business model for Cover in app discovery. It could potentially charge other developers to have Cover suggest their app. That could create a route for Cover to make good on the $1.7 million it raised from investors including First Round Capital courtesy of Josh Kopelman, Harrison Metal, Capital, Max Levchin, and Keith Rabois.

Plenty Of Android Pie To Go Around

Now that it’s publicly available, Cover can test its might versus other lockscreens like Aviate, Facebook Home, Widdit, and more. With time, it might take on a whole additional weightclass of competitors. Jackson says “A lot of users are actually asking us to build a launcher” which would pit Cover against GO Launcher, Nova Launcher, Everything.me, and others.

But Jackson is convinced there will be enough users for everyone. “It will be an interesting space to watch the next few years as Android gets better and the phones get better, appealing to a higher market. The Android pie itself is growing really huge. People are just starting to realize they can customize their phone. I think a handful of the startups you mention are all going to do really well.”

Cover and many of these launchers and lockscreens are shockingly different interfaces than people are used to. People fear what they don’t understand, creating a barrier to adoption. But we all need to come to grips with the fact that screen after screen of app folders may not be the best way to organize a phone.

There’s a swirling sea of apps out there. The next wave of mobile won’t be about adding more, but using context to help us navigate between them.