Why should the ladies have all the fun? Like Le Tote and Rent The Runway, a new start-up, Eleven James, is offering something men may find alluring: the opportunity to wear a cool new watch every few months for a monthly fee.

Founded by Randy Brandoff, former CMO of NetJets and Marquis Jet, the company isn’t positioning itself as a rental service per se. The concierge service costs $249 a month to wear three “cheaper” watches worth around $10,000 per year ($449 for six) and $459 a month for a Connoisseur Collection selection of higher end brands. The “Virtuoso” tier gets you three crazy expensive pieces for $899 or six for $1,599 a month. You wear them around, flashing your bling hither and yon, and then return the watches for cleaning and they’re sent to another member. To be clear, if $10,000 for a “low-end” watch sounds ludicrous, you’re probably not the target audience.

Instead the company is aiming at folks who may not want want to dump a few months’ salary on a watch and instead want something fancy to wear to work and about town. Because, for some watch snobs, being strapped to one watch can be as terrible as being strapped to none at all, Eleven James offers a bit of choice and a personal concierge will walk you through potential selections and styles. Their collection includes items from IWC, Panerai, Patek Phillipe, and the like. They have just completed a beta group of testers and now have 100 or so members who will receive a new watch every few months, depending on demand, and get invites to parties and other watch-centric events in their home cities. 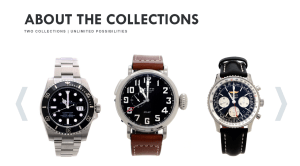 Eleven James also hopes to become a watch trade-in service, allowing its customers to drop their old watches off on consignment or even to enter them into rotation. There is some talk internally with brands who are interested in using this as a marketing exercise and the company has created a special algorithm to match members with watches depending on their preferences.

Brandoff didn’t want to make this just another rental service. “The luxury market has evolved to a world prioritizing access and experiences,” he said. “Private jets, vacation homes, classic cars, and many other historically prized possessions have all become accessible via various club and shared ownership models that have multiplied in offerings and popularity.” He’s simply following that trend, he said.

The company received $1.4 million in seed funding backed by numerous strategic investors, including Box Group, WGI Group, Kenny Dichter, Ken Austin, Brian Distelberger, Ed Moran, and Jason Saltzman. While it may not make sense for many non-watch nerds, it seems like a great way to get new brands into the hands of fans and, more important, bring back the age-old, timeless habit of strapping on a bit of Swiss frippery and strolling down the boulevard, a jaunty tune on your lips and a merry “Good day” offered to all and sundry. A guy can dream.