Update: According to the Wall Street Journal, Microsoft has slightly edited the letter following complaint. Good on them for doing so.

Today Microsoft released a form letter essentially created for men to send to women, encouraging their partners to let them buy an Xbox One console, as the new device will be great for both of them.

The letter, which can be customized slightly, is incredibly bad, playing to ridiculous male and female gender stereotypes. It presumes that women don’t like sports or play video games and need to be condescended into technology purchase decisions by their male partners as they oh-so-certainly couldn’t come to those conclusions on their own!

After all, women and technology, amirite?

Holy hell, Microsoft. I know that young male gamers can be a touch on the ignorant side when it comes to gender equality, but from a company worth more than $300 billion, and with better-than-normal female representation in its senior leadership, producing something this sexist and ignorant is an incredible disappointment and shame.

Propagating sexist stereotypes isn’t something to be tolerated. What’s almost incredible in the letter (before its language is potentially shaken up by the user) is that it manages to be directly sexist in implication, using loaded language like “honey” and comments on the physical appearance of the unnamed recipient, while eliding direct indication of gender. But it’s there. If you can’t see it, open your eyes.

This from a company that managed to come out on the right side of history on gay rights in Washington. The letter is also stridently heteronormative. Its almost oppressively straight tone is off-key from a company such as Microsoft, which has a large LGBT workforce. You almost want to wonder what’s up over in Xbox-land.

For flavor, a few quotes:

Hey honey, Not sure if you’ve heard, but Xbox One is now available.

After all, women don’t follow news, let alone technology news, and so how could she know! Time to let her in on the secrets of little boxes with blinky lights!

Maybe you don’t LOVE games like I do, but there’s really something for everyone. […] You love movies and I love football. Well, with the Xbox One, we can love both.

Again, women don’t play games. Ever. And apparently don’t like football. But they do love those movies! You know, the ones with the actors and actresses they read about in their fluffy women’s magazines! The sort of magazines that never discuss technology, of course. We know that as we’ve already established that the women this letter is for have never heard of the word “Xbox” before!

We can talk on Skype with your favorite sister whom, of course, I love dearly.

Because men don’t have close family! That’s for women! And dear heavens if men have, you know feelings and all that. Those are for women! And fine dear we can talk to your goddamn sister so long as I get Man Time later to shoot things. Pew, pew, pew, woman.

So what do you say? Let’s be like an awesome movie montage—just me, you, and my [the my is crossed out] our Xbox One—together at last.

P.S. Did I mention how beautiful you are? And how I really appreciate that you love me more than anything?

Microsoft, did I mention how stupid this letter is and how much respect for you I just lost? 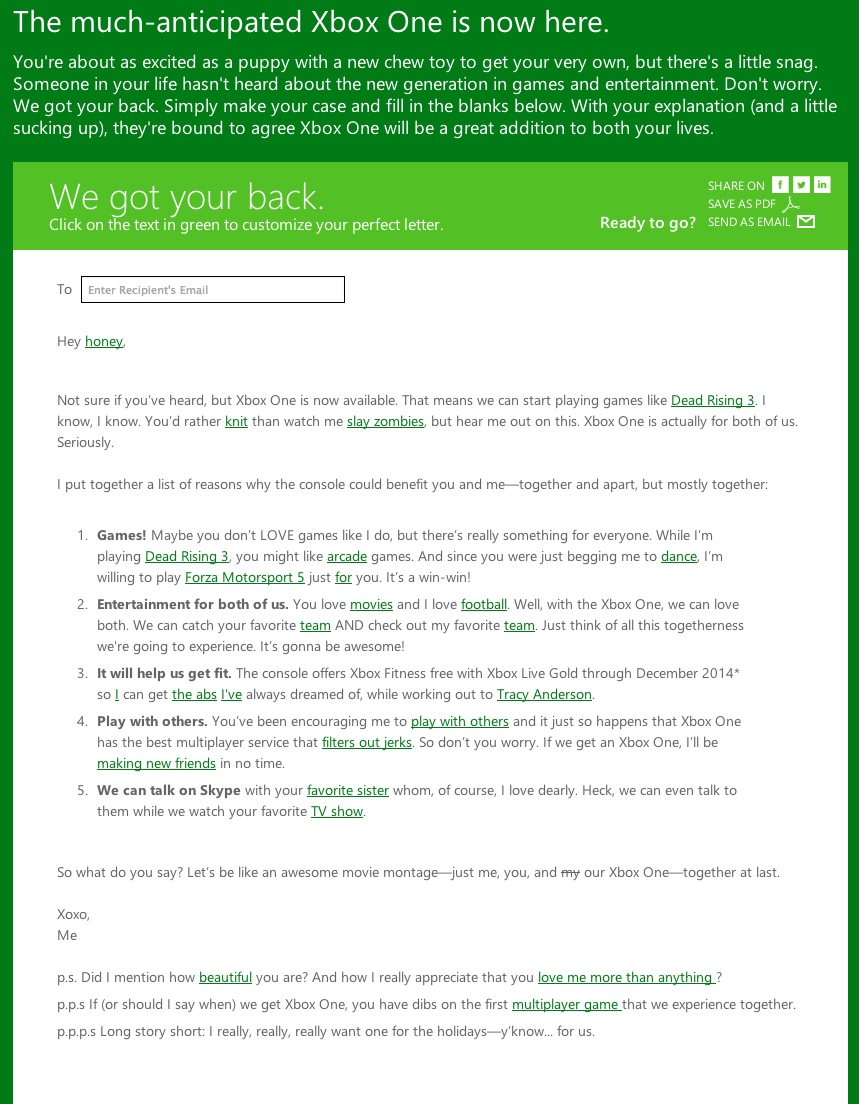