University of Waterloo college students Dhananja Jayalath and Christopher Wiebe were frustrated by their workouts in the gym. They felt like there was no way to know whether they were actually working the right muscles when lifting weights. A personal trainer wasn’t an option for these cash-strapped students, and, as electrical engineers, both thought there could be a frictionless way that hardware technology could collect this data from your muscles. But this hadn’t been developed yet.

Fast-forward three years, and Jayalath and Wiebe are debuting this connected, wearable workout gear to the public after spending that time developing the hardware and software side. Backed with $3.5 million in seed funding from Chamath Palihapitiya’s Social+Capital Partnership, Athos offers a wearable technology that is fully integrated in workout clothing and can track your muscle groups, heart rate, breathing level and more. You can pre-order the Athos, which will be available in the spring of 2014, here.

When Jayalath and Wiebe started delving into the actual problem (which has even been on Apple’s mind) of creating this connected workout gear, they realized that they could take shortcuts around trying to measure muscle productivity or actually translate the medical science into actionable data that people could use and wear every day. The duo, whose alma mater graduates some of the most talented hardware engineers in the world, unsurprisingly chose to take the latter approach. So while in school, they spent all their spare time researching and developing their hardware product.

They soon discovered that the most effective way of tracking muscles is through electromyography, or EMG, which is the technique used to measure and evaluate electrical signals generated by muscles. With EMG, electrode adhesive sensors are put on the muscle to collect electricity and the raw signal. These sensors provide access to the physiological processes that allow muscles to produce movement, to stretch and to generate force. The traditional uses of EMG are putting on electrode sensors to conduct physiotherapy, rehab, and to treat muscular degenerative diseases.

Jayalath and Wiebe spent a year-and-a-half while still at Waterloo developing a prototype of the wearable compression garment that harnessed EMG technology wirelessly, with sensors that track muscle groups, heart rate, breathing and more. Of course, at the same time, both were being pursued aggressively by technology companies to join after finishing college. Along the way, Jayalath accepted an offer to be a hardware engineer at Apple and Wiebe planned to join Analog Devices as a chip designer. But in the meantime, they were making progress with their prototype. And last spring, they actually presented their idea at a competition at Waterloo.

Social+Capital founder and early Facebook growth exec Chamath Palihapitiya happened to be at the competition (he’s a Waterloo alum), and what Wiebe and Jayalath were working on caught his eye. The pair pitched him, and he quickly realized that there was something potentially game changing about what they could accomplish. “This was something I had been thinking about for a while – namely that sensors should be able to measure much more than just heart rate or using an accelerometer/gyroscope to impute the behavior of the body. So when I saw Athos’ original demo, it resonated immediately as a completely revolutionary way to use technology to measure one’s body and then act on that information in a useful way,” Palihapitiya tells me.

So he seeded them with $3.5 million, and the pair declined their respective job offers in order to build Athos. After moving, they teamed up with Joel Seligstein — who was the Android manager at Facebook — neuroscientist Julie Desjardins, and the former VP of hardware at Leapfrog, Hamid Butt. Until a few months ago, the team was incubated and working out of Social+Capital’s space in Palo Alto.

Over the past year, Wiebe, Jayalath, and Seligstein have built a way to use non-adhesive sensors in a compression garment (a long-sleeved exercise top and bike shorts/legging) that transmits the muscle data to a small module, which is called the core. This core then wirelessly syncs this data to Athos’ software app, which collects all information and actually gives users a way to track and understand their workouts.

The credit-card-sized core module is seamlessly integrated into compression workout clothing and transmits muscle feedback to an app. The first version of the upper body apparel will have 14 muscle sensors and 1 pair for heart rate and breathing. These sensors are places throughout the garment (which looks and feels much like a lightweight Under Armour workout shirt or legging). In terms of design, the Athos’ core is extremely lightweight, and the clothing itself feels like high-quality exercise wear. We’re told Athos partnered with Branch for design.

On the arm for the women’s shirt, or the chest for the men’s shirt (and at the hip for the lower body apparel), users can insert the core device, which is a small, orange oval-shaped module. This is inserted in the garment, and then the user essentially can transmit any data generated from muscular expenditure, heart rate, and breathing to the Athos mobile app.

In terms of the hardware specs, the module and garments include a 3-axis accelerometer and 3-axis magnetometer to provide orientational awareness, e.g. lying down vs. sitting up; two multi-colored LEDs, which indicate status in the core and more; Bluetooth 4.0; and 10 hours of battery life (i.e. five days of two-hour workouts. The startup is not disclosing some of the chips and hardware in the core, as this is what they call their ‘secret sauce.’ All the hardware and garments are water-, sweat- and Gatorade-resistant, and you can clean the garments as you normally would in a washing machine and dryer.

The simplest use of Athos involves how you are actually using your muscles when working out, whether that be cardio or strength training. On the Athos iOS app (the startup is developing for iOS first, we’re told), you’ll see a simulated body, and, via the sensors, you’ll be able to see whether you are overworking or under working a muscle group. So if you are doing curls, your biceps will be highlighted in green, and if your muscle reaches a red color, you are over exerting your muscle and should scale back. Alternatively, your muscle will read as a lighter green, or won’t show anything at all if you are under-exerting the muscle. The sensor will input data such as heart rate and oxygen levels. 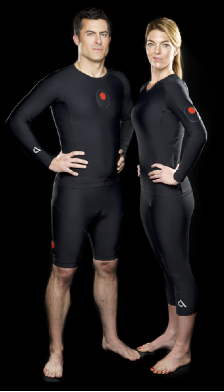 You’ll be able to measure heart rate without a chest strap, provide precise, real-time interpretation of complex movements, measure and recommend proper exercise form in any activity for the gym goer and the outdoor athlete, monitor muscle fatigue and recommend training levels, quantify and summarize the content of workouts (strength training vs. cardio vs. stretch), and track training levels over time to help avoid over or under training specific muscle groups.

The app will also be able to give you more targeted feedback according to the type of exercise being done. So you’d be able to input your goal (i.e. weight loss) and your type of exercise (strength training), and the app would show you whether you are in the right heart zone, whether your muscles are being pushed enough (or too much) and more. The overall vision for Athos is to show you how to better balance bike pedaling, breathe better through meditation, push through a hard set of weights, bend into the perfect yoga posture or push the body for maximum efficiency.

In terms of cost, Athos will be charging $99 for any piece of clothing, and $199 for a core. The startup already has two patents, and has applied for a few more.

In the world of wearables; the Fitbit, Nike FuelBand, and the Jawbone UP use accelerometers to track your steps and overall physical activity. The Basis takes this one step further to track your heart rate, perspiration level, and skin temperature. But Athos is one of the only “wearables” that is actually tracking your muscle output, as well.

Wiebe, Jayalath and Seligstein think that their product actually complements wearables, which track your motion all day. Athos, in their mind, can be the go-to wearable when you work out, or do any activity that uses your muscles beyond walking. Palihapitiya adds that over time, Athos can integrate with wearables so that the startup’s data can be shared and used. “We want to build the universal platform for a deeper, nuanced understanding of physiology,” he adds.

Already, Athos is being tested out by a number of professional athletes and trainers. It would make sense that Nike and Under Armour would follow suit. But Athos says it isn’t just building their hardware and software for the power athlete. They believe that their product can help anyone with exercise or even rehabilitation.

Palihapitiya explains, “I think we all want to be more physically capable – this means being a father who is able to play sports with his kids, a young woman who wants to use yoga as their primary workout or an NBA player who is training to excel and make another all-star team. The point is that a more optimal understanding of one’s physique is really useful information and can be used for a wide spectrum of things. Athos works in all of these cases because it is productized in the most universal way – in clothing you can just put on and go.”

I saw an athlete lift weights, cycle and even run wearing the Athos garments and core, and witnessed the app display all the performance and measurement in real time. It’s impressive to see just how much data and insight the startup is able to get from the combination of measuring muscle activity, heart rate and oxygen levels. And the consumer experience could become even more compelling if the app could actually start personalizing the experience, becoming more intelligent with each workout.

Unfortunately, we’re told that the Athos won’t be available until the spring. But I know for a fact that I will be purchasing the full set. In the ever-growing sea of smartwatches and wearables, I’ve also been looking for a device that can do more than just track calories burned, miles covered or heart rate when I am working out. I’m willing to wait with the hope that Athos will become that and more.