London-based U.K. startup what3words has closed a  $500,000 seed round of financing from a group of angel investors, including Shutl’s Guy Westlake.

The startup launched an ambitious bid to reinvent ZIP codes/postcodes back in July using location-pinpointing alternatives made up of a combination of three words — such as meowing.creatively.drives or lung.lots.transmitted — each representing a 3m x 3m square of the globe. (Any serendipitous poetry generated by what3word’s location marking linguistic algorithm is entirely accidental.)

what3words’ premise is that words are easier to share and memorise than ZIP code style strings of letters and/or numbers. The accuracy level of its word trios can also be greater than some postcode/ZIP code areas, with the startup promising accuracy to the nearest two metres. And even to the nearest metre if you’re prepared to get out your wallet and pay for that portion of its offering.

what3words began monetising its linguistic location markers immediately by selling personalised combinations of words — confusingly called OneWords — to anyone (consumer or business) that wants to badge a particular location so it stands out in a map search. Or becomes easier to remember.

Pictured below is an example of one of these OneWords being used to mark out a building on The Strand in London — and also what looks to be an example of brandsquatting on the service, unless TechCrunch has a London office that I didn’t know about… 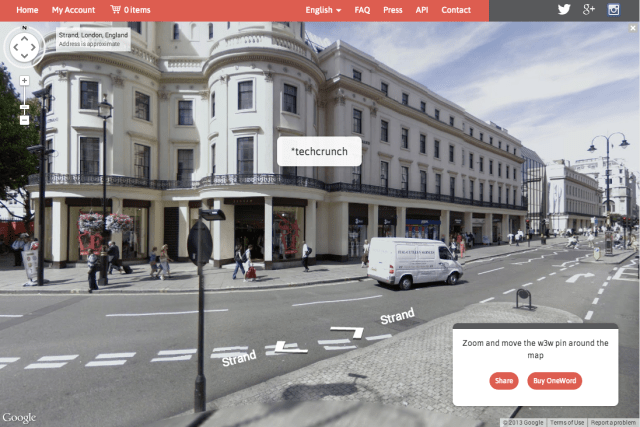 OneWords currently have to be at least six characters long, and can be a single recognisable word (if it’s not already claimed) or a customised string. Anything presumably goes — although, despite the above example, directly infringing others’ IP is explicitly disallowed in what3words’ T&Cs — so long as the string is not obviously offensive.

It said the new funding will be used for “developing the platform to be used by businesses” — but declined to provide further details, saying only that “several discussions” are going on in the ecommerce space. It’s notable that OneWords currently have a six-letter character cap in place. Opening up even shorter OneWords could be one premium revenue stream it’s considering.

Also today, what3words has released its first API to encourage developers and businesses to start using, and therefore spreading, its location pinpointing tech. Simplified postcodes are only going to be useful if enough people realise they exist and start using changing their location-sharing habits.

Commenting on the funding in a statement, Shutl’s Westlake said: “what3words shares much in common with Shutl, not least the fact that they both straddle B2B and B2C markets. I believe it’s a very exciting space to be in, and am delighted to put my experience to use and help the team navigate the challenges ahead.”

what3words said Westlake brings “relevant recent experience” to its business. Westlake was a founding team member at Shutl and also one of its earliest investors. Shutl, a UK-based courier marketplace that delivers local goods within a couple of hours of an online purchase, was acquired by eBay last month — to help it expand its same-day delivery service, eBay Now, to the U.K.