We’re back, baby! Bitcoin’s price has taken off again, forcing some to defend the value of the currency as utterly un-bubblish. This becomes a humorous exercise.

The finance nerd community (of which I’m not nearly good enough to be a member) is done talking about the Trillion Dollar Coin for now, so it’s back on the Bitcoin bus. Bitcoin is trading at record price points, currently clocking in at around $264 USD per coin. To put that price point in perspective, in April Bitcoin spiked to around $237. It then fell all the way to around $69 in July. And now we are back north of the $200 mark, rapidly approaching the $300 ceiling.

People keep saying this isn’t a bubble, and it confuses me. Of course this is a bubble. It’s a far too rapid increase in the price of a financial instrument that is unmoored from any inherent value that is being bid up by aggressive individual speculation. What else is that?

Joe Weisenthal, better known as @TheStalwart, called Bitcoin a joke today, making the following key point: “The currency has been surging several percent every day lately, and that’s evidence that it’s not in a bubble?” Bingo.

But there is another point that is worth keeping in mind. It appears that Bitcoin is currently seeing its value break ranks with its transaction volume. This is not what we have seen in the past, when the two were in loose unison.

Here are two charts, the first showing the price of a single Bitcoin in USD, and the second showing Bitcoin transactions per day. Follow both from left to right, and see if you can feel the change: 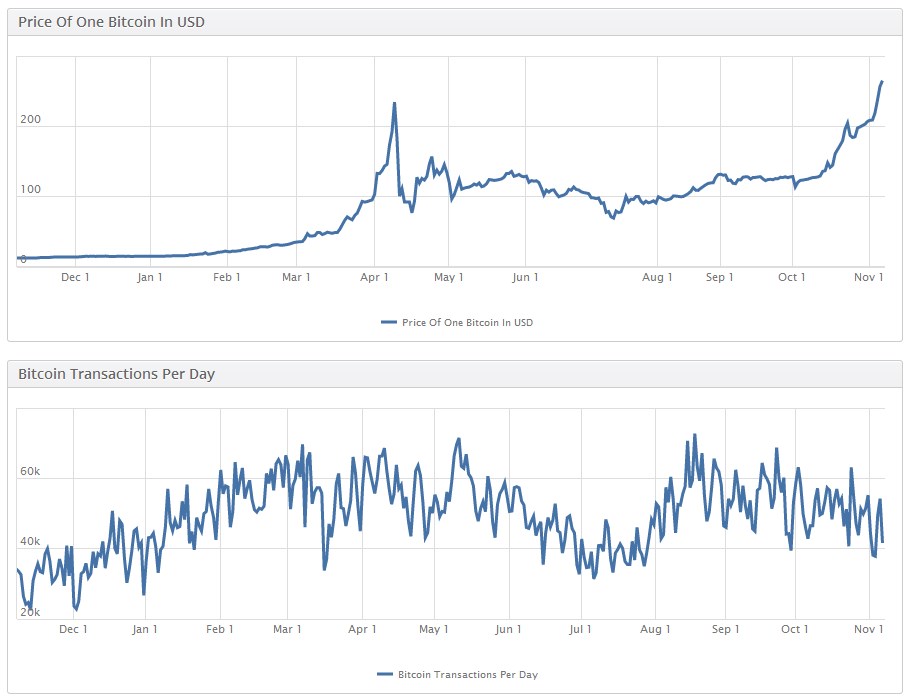 What’s going on? We can’t be sure, but I think that the shuttering of Silk Road has led to a meaningful decline in Bitcoin transactions. However, speculative spirit is driving the price of the currency higher. So, the current boom is even more bubblish than before, when the price rose before, and then cratered, mostly tied to rising and falling volume.

Bitcoin can have ‘value’ based not on any sort of government backing or the like, but it can provide short-term utility to all holders if it has use. But if use is in decline, its value should follow. To see its value rise as its use declines is simply odd.