Despite a torrent of outrage from the press, world leaders, and the United States Congress, most Americans still approve of the National Security Agency’s surveillance practices. Most importantly, public opinion barely budged a percentage point since the NSA’s global phone and Internet spy network was first revealed.

We even polled whether Americans support the near universally condemned practice of spying on European allies.

Yep, they support that one, too. The wonderful thing about the Google Surveys tool we use is that respondents can also comment on their opinion, which gives us some insight into their reasoning.

NSA Spying “Acceptable” The best question we have to determine any trends in public opinion is whether Americans think the NSA practices are “acceptable”. Since 2006, that number has hovered a little over 51 percent.

Here are a few comments from the poll:

“depends on their evidence for the order” 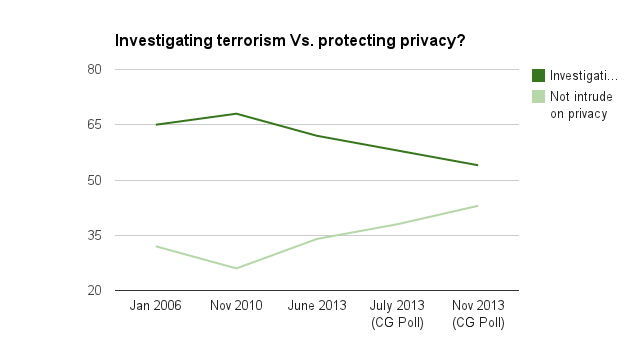 This graph shows a mild trend that should make the American Civil Liberties Union happy, but changes from July are within the margin of error (54.2% (+4.3 / -4.4)). Polls from previous years are from Pew.

Here is a comment from one respondent in our July survey: “investigating terrorist threats at the sake of privacy is fine as long as the information isn’t used for any other purpose and the focus is on terrorism and not anything else.”

Spy On Them All! The most controversial aspect of NSA spying has certainly been the practice of secretly tapping world leaders’ phones. Even though it’s faced near universal opposition, including President Obama himself, a majority of Americans seem pretty okay with it.

From the comments: “not intrude on america’s privacy i support the government spying on russia germany france the un and any other non us citizens.”

Government Is Omniscient If the previous data hasn’t sent our libertarian readers screaming in a fit of big-government rage, this next data point should tip them over the edge. A whopping 43 percent of Americans think the U.S. government has collected and viewed the contents of their emails and/or phone calls.

No one, not even the most die-hard security hawks, have said that it’s possible, legal, or ethical to spy on more than a few thousand Americans. The best estimates put the number around 300. Facebook received requests for data on 20,000 users, but we don’t know what was requested or given.

Either way, spying on +100 million Americans would require an extraordinary act of Congress and a budget for the NSA somewhere north of America’s current debt. Respondents, however, are not concerned:

–“don’t know but i have nothing to hide”

For The Methodology Nerds Stat-curious readers can view the methodology of the surveys  in links at the end of the post. For this particular survey, we tried out a new Google survey tool that allows respondents to answer multiple questions in a row (previously, we could only ask one question).

Unfortunately, I got different outcomes when I asked the exact questions in a serial format, rather than individually. For instance, 56 percent of respondents said that it was more important for the federal government to investigate terrorist threats in the single-shot question format, compared to 63% in the multiple question format. While it’s still within the margin of error, it’s a big discrepancy. It seems like in some way, prior related questions are exacerbating the responses of subsequent questions.

Also, curiously, respondents believe that the government has “gone too far in restricting civil liberties” while protecting national security.

Keep in mind, these are the same folks who are okay with the NSA. So, for whatever reason, respondents believe the NSA is an exception within the security complex. Comments don’t help us understand why.

Conclusion As we’ve written about before, the American public has widely supported the NSA’s activities before and after the scandal. I’m no fan of the secretive spying, but if the government appears to be acting slowly on surveillance reform, it could be because they’re responding to constituents.