If Apple decided to make updates to its OS X operating system free in part to drive more rapid consumer uptake, it was a great decision: Market adoption of its new OS X Mavericks operating system has beaten adoption of the preceding Mountain Lion version by a large margin.

It’s worth noting that Chikita reported Mavericks passing the 10 percent mark sooner than NetMarketShare – data of this sort is somewhat imprecise. However, we can tell, by weighing both data sources, that Mavericks has enjoyed far more rapid adoption than preceding editions of OS X. 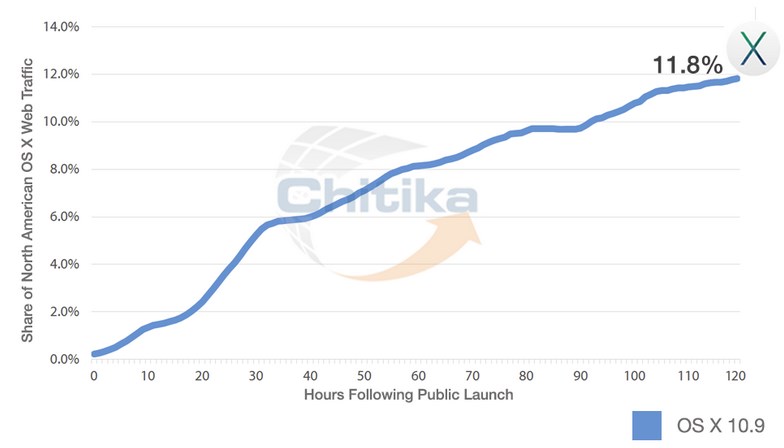 In real, or perhaps gross, terms, Mavericks has market share equivalent to essentially half of Windows 8.1 (an operating system that also launched in October), which reached 1.72 percent in the same month-period. Only Windows 8 users could update to Windows 8.1, giving the latter a market-share pool of roughly 8 percent. Mavericks, by contrast, could only draw from part of OS X’s aggregate 7.73 percent market share, meaning there were fewer total machines that were able to move to Apple’s new operating system. That explains why Windows 8.1 has grown its share more quickly, though the faster sales rate of Windows-based machines has certainly helped, as well.

However, from a different perspective, Mavericks is spanking Windows 8.1:

Both companies can take heart in the numbers to a certain extent. What will be interesting to watch at the end of November will be the total converted percentage for both Mavericks and Windows 8.1, and whether there is anything that we can glean from that information.