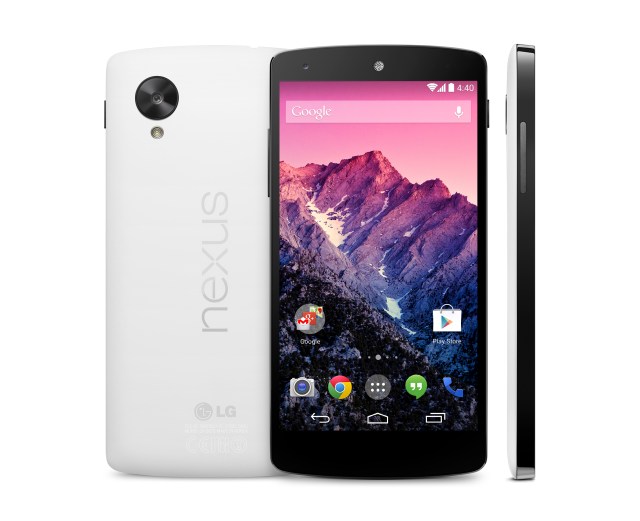 At long last, Google has officially announced what has been perhaps their worst kept secret in a while: the Nexus 5.

The Nexus 5 had seen more than its fair share of early outs, with everything from fleeting, “accidental” appearances in the hands of Google employees in quickly-deleted promo videos to full-blown product pages going up on the Google Play store ahead of time.

The Nexus 5 will be the first device to ship with Android 4.4 (codenamed “KitKat” through a suprising collaboration with Nestlé and Hershey), which they first announced back in early September. Other devices, like the Nexus 4, 7, and 10, will be getting 4.4 in “the coming weeks”.

The new Nexus comes with two color variants: one black, one white. The 16GB LTE model will cost you $349, while the 32GB LTE model will set you back $399. Both devices are unlocked, and will go up for sale later today.

While Google’s Nexus line mainly exists to provide people a direct route to an unlocked, higher-end device, the Nexus 5 will have a few features that’ll be exclusive at first. It’ll be the first device with Google’s “HDR+” mode, their company’s new in-house approach to HDR, which takes multiple shots in rapid succession and combines the best parts of each into one photo. It’ll also be the first with Google’s new homescreen launcher, which brings Google Search to every page of your homescreen and allows you to trigger a search at any time by saying “Ok, Google”.

Here’s what we know so far about the innards:

We’re just about to run off and spend some time with the device, so check back in just a bit for our hands-on pics and early impressions!