The software as a service pricing for AlleRad undercuts large enterprise players providing similar software, such as Siemens, said founder Jakub Musiałek. The cost of using rival software from big enterprise healthcare software providers is in the region of €25,000 per workstation licence vs Pixel’s free-to-use offering.

The other twist is it’s building a marketplace for X-ray reading jobs. Radiologists using the AlleRad platform place bids to compete for radiogram reading jobs — with hospitals then able to select a remote radiologist via the platform based on the price they are offering to do the work (ratings are also involved, to ensure a minimum level of expertise for the radiologists using the platform).

Pixel’s business model is then to take a revenue share of any radiology jobs confirmed via its platform. In Poland it says it’s taking around 10% of the fee charged.

“A radiologist physician working at home cannot afford to just pay several thousands of euros for a licence. We are not selling the application itself we are selling the service,” said Musiałek. 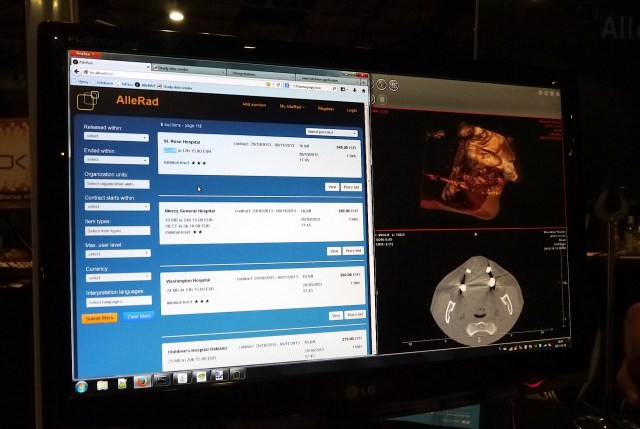 The startup won a TC meetup in Warsaw earlier this year. Its system has been live in Poland for a few months, and Musiałek said it now has more than 150 users signed up. Pixel has been self-funding AlleRad up to now, but is looking for outside funding to underpin its plans for market expansion.

Specifically it’s considering options for expanding within Europe. “Right now we are looking for some opportunities to find any market different form Poland,” he said.

He also revealed it’s withdrawn, for the moment, from an attempt on the Italian market — after finding it too hard to hammer out workable terms with partners. Targeting the German market next is a possibility, but he said it’s still weighing up whether it needs to set up a German subsidiary to sell locally.

While he said it’s been relatively easy to find hospitals to adopt its software in its home market, he conceded it’s proving harder work to break into other European markets. “Right now we are look for [partners],” he said. “As soon as we go to another country we find out they don’t know our company, they don’t know the name, they don’t know anything about us.

“In Poland we know many different hospitals and people so it’s very easy for us. Here in Germany we met someone who said the German hospital will buy nothing from a Polish company — so we have to create a company here in Germany.”

In future, if it is able to establish AlleRad widely enough, Musiałek said it could look to start licensing the software to hospitals, rather than offering it as software as a service to physicians.

In terms of the size of the opportunity, in four European countries (Italy, Germany, France and the U.K.) it said they are over 3,000 hospitals, which monthly do around 90 million radiogram studies. “It’s a really big market,” added Musiałek.