Facebook didn’t stop when it hit 1 billion users. And it won’t stop even if it connects everyone with web access. “To make the world more open and connected” really means the world — every human regardless of location or income. That’s why CEO Mark Zuckerberg says he’s “retooling the company to take on a lot of harder problems” — specifically spreading the Internet itself.

Last month, Zuckerberg launched Internet.org with a 10-page whitepaper he wrote himself. It’s a web access initiative and partnership with six telecommunications and mobile companies. Together, they’ll build new data-compression technologies, network infrastructure, and business models that make it possible to not only get everyone a smartphone, but make the data that powers them affordable. This is critical because most of the cost of owning a smartphone is the data, not the hardware.

Some will say it’s simply Facebook’s plot to get more users, but at its core, the mission is truly altruistic. Internet access leads to education, empowerment, and economic mobility. Everywhere it’s come it’s increased GDP and helped people stay in closer touch with those they love. Could it earn money for Facebook? Sure. But that doesn’t make it the driving motive.

Though Zuckerberg is championing the cause, it won’t just be some hobby of his. It’s Facebook’s new mandate. But really, it’s an extension of what the social network been doing since 2004.

“The tactics change all the time”,  but not the mission, Mark Zuckerberg said on stage. You can watch the full interview below

The still-young CEO discussed how businesses break down into two categories. “There are companies that define themselves by the way they do things, and companies that define themselves by a concrete way they change the world.” The latter is preferable to him. It’s why Zuckerberg grew up idolizing Bill Gates and his mission to put “a computer on every desk and in every home.”

Creating a mission that matters requires doing something audacious, and the values that get you there aren’t always universally popular. “I’m of the belief that values are only useful if they’re controversial,” said Zuckerberg. He chided companies for posting hollow lists of values like “be honest,” saying of course you have to be honest.

Facebook’s controversial value has been “Move Fast And Break Things.” Employees are encouraged to build, experiment, and iterate rather than sit on new products until they’re perfect. Zuckerberg laughed. “It gets us into tons of trouble,” and he admits it’s still important to “slow down and fix your shit.” But the philosophy has helped Facebook evolve quickly and avoid being disrupted. 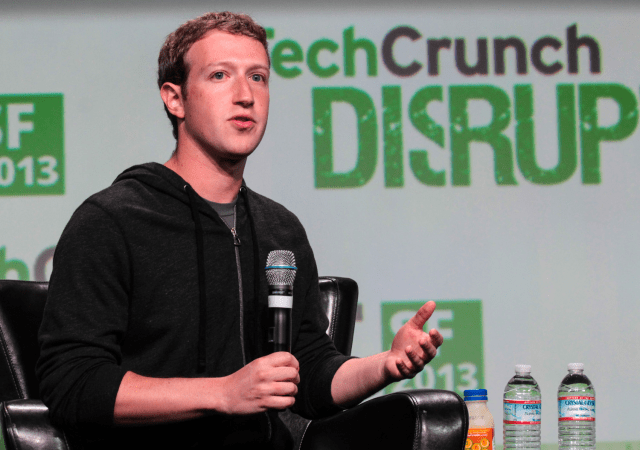 It’s also led Facebook to 1 billion active users. But Zuckerberg says “A billion isn’t a magical number. No one wakes up and says ‘I want to get one-seventh of the world to do something.'”

Yet in a moment of humility, when Michael Arrington asked if Zuckerberg wants everyone on Facebook, he said “Of course we do, but I don’t think that’s realistic.” There will always be people who don’t like a particular tool. You don’t have to look far on the Internet for people who hate Facebook, yet we’re wired to share. Whether its via SMS, email, Twitter, or its own social network, Internet.org and Facebook’s task is to give people access and let them choose how to communicate.

All humans want to be connected, Zuckerberg concluded. And with a glint in his eye about his own purpose on this planet and that of his company, Zuckerberg exclaimed, “That’s why we’re here.”