Let’s face it: tablets have grown to be tremendously popular (to the point where traditional PCs sales are slumping), but typing on them is still sort of a pain. After all, no matter how accustomed you get to typing away on a smooth slate of glass or plastic, it’s a poor replacement for an actual physical keyboard with real haptic feedback.

That’s why Swype co-founder Randy Marsden — along with Bridgescale Partners co-founder Rob Chaplinsky — decided to take another stab at reinventing typing on the go with an Android keyboard app called Dryft here on the Disrupt SF 2013 stage.

“You see all these people using these Bluetooth keyboards with their tablets,” co-founder Randy Marsden said. “And they’re basically turning those things back into laptops. This is the market saying there’s a problem.” 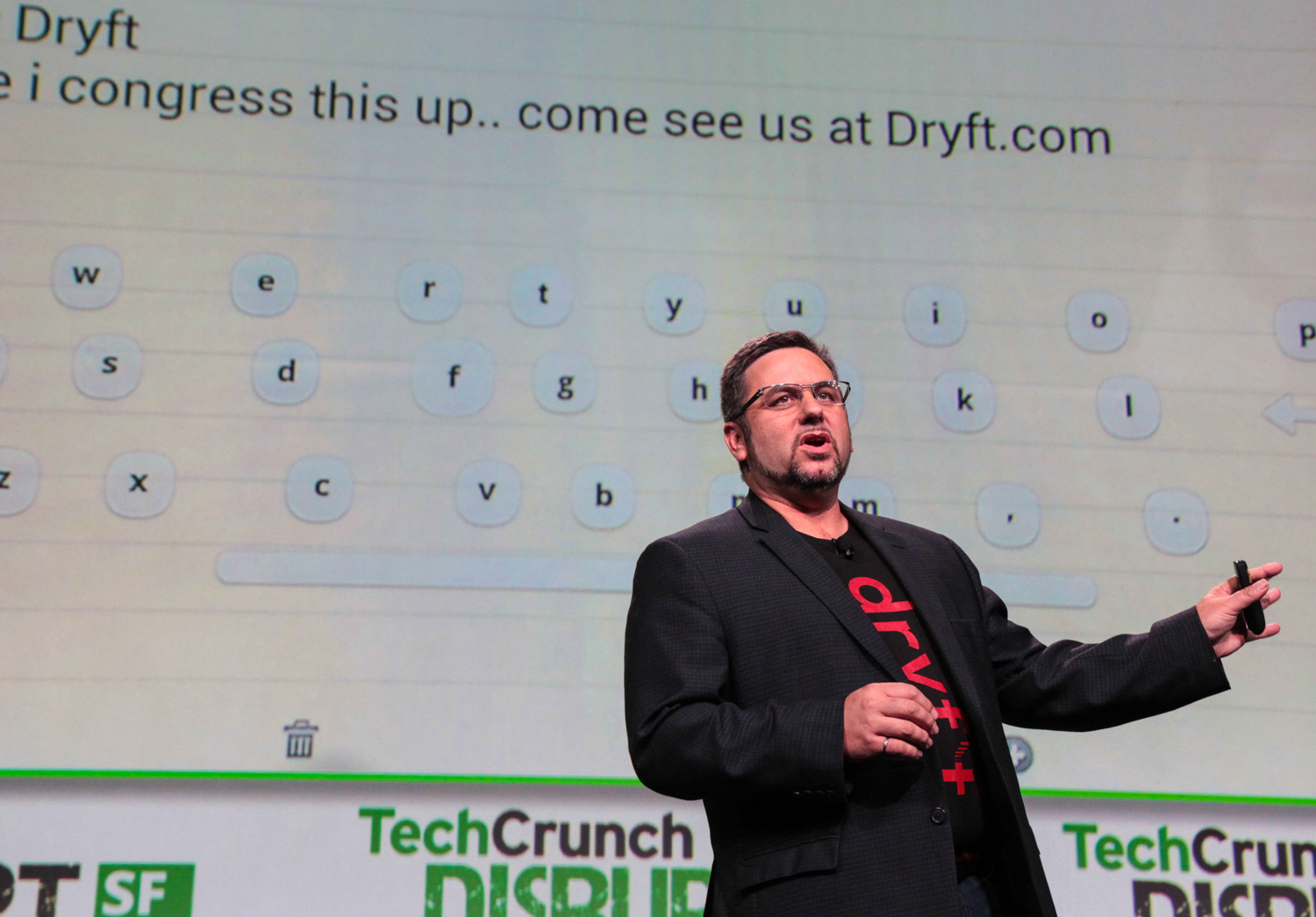 The big issue here is accuracy — to hear Marsden tell it, people want to use their tablets as content creation devices but are stymied by frustrated typing experiences. In a way, it all comes back to the way most people were taught to type in the first place. For years, teachers like Mavis Beacon have implored novice typists to keep their fingers on the home row as delineated by those little nubs on the F and J keys. But surprise surprise, your tablet doesn’t have those notches etched into the screen so what’s an on-the-go touch typist to do?

That’s where Dryft’s special sauce comes into play. Instead of forcing users to acclimate to the keyboard layout of whatever touchscreen device they’re using, the Dryft keyboard appears on screen only when the user places their fingers on the display. In short, the home row (and by extension, the rest of the keyboard) follows your fingers no matter where you put them on the screen. Once your fingers have settled into a resting position, those home row keys appear under them and the rest of the keys blossom out around them. 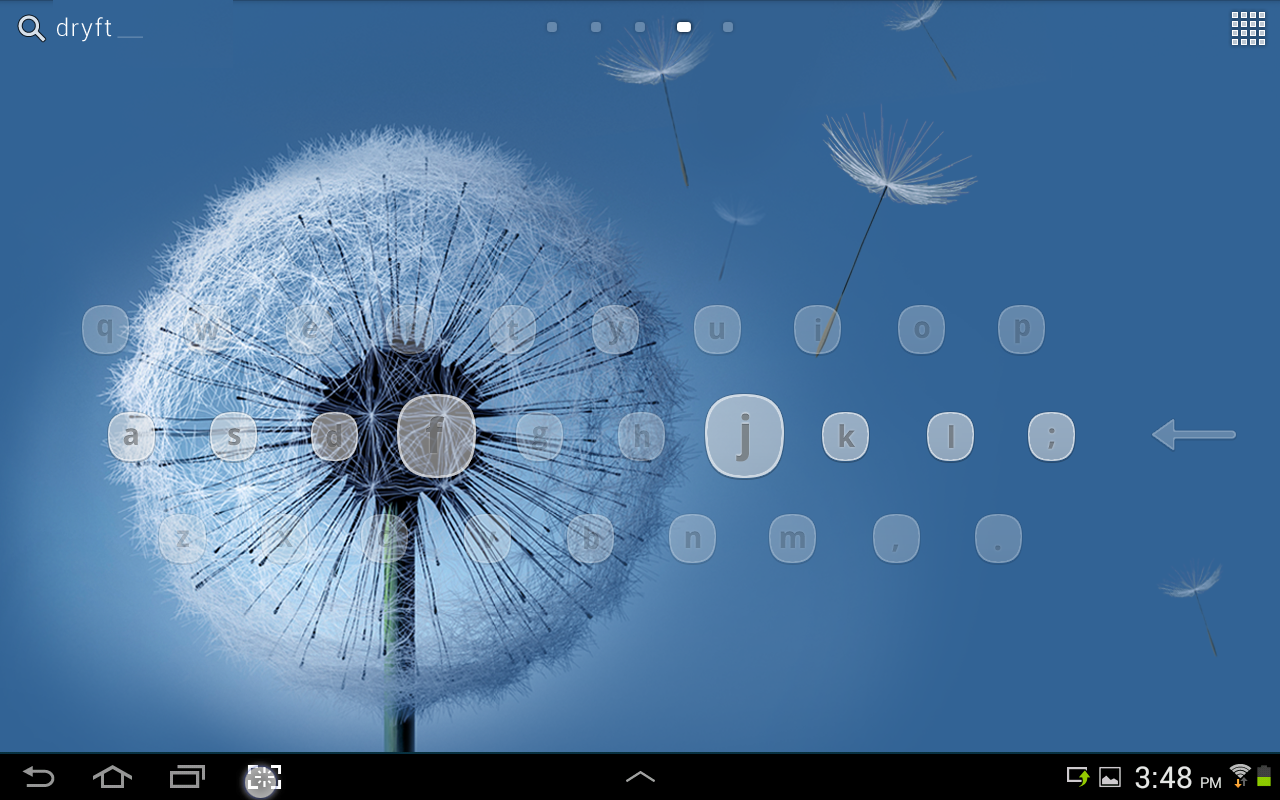 The concept admittedly sounds like a simple one — why not make a keyboard that adapts to the person using it — but there’s plenty of behind the scenes action that makes the keyboard work as well as it does. It doesn’t simply track touch inputs on your tablet’s screen for instance: Dryft also uses the tablet’s accelerometer to measure the sensitivity of your touch and figure out if you actually meant to peck at a letter or if you were just resting your fingers.

The keyboard as a whole isn’t the only thing users can shift around the screen either, as Dryft is always trying to figure what it is you’re trying to type and shifts keys to where it thinks you need them. The end result is a keyboard that is fundamentally yours — handing it to a friend to muck around with would probably lead to some very puzzled looks until they figured out that they too can bend the keyboard to their whims. The beauty of the Dryft formula is that you ultimately spend less time grappling with the intricacies of whatever keyboard the manufacturer decided to cook up.

Dryft is hardly the first company that’s tried to reinvent how we type on tablets, but it is perhaps one of the most ambitious. Marsden’s goal is an awfully lofty one — he wants to see Dryft become the de facto mode of text input for tablets, though he concedes that the team can’t do it without a little external help. The sort of low-level access to the accelerometer that makes Dryft work as well as it does means it requires buy-in from hardware manufacturers and OEMs to implement properly.

Considering that Marsden co-founded Swype way back when, it’s not much of a surprise to hear that he wants to take a similar approach to bringing Dryft to the masses. It’s all about locking up those crucial OEM partnerships just like Swype did early on in its lifetime. Of course, there’s one big device player that will probably never play ball in the way that Dryft would like, but they may have found a way around that little sticking point too.

“The way iOS is structured only Apple can make an alternate keyboard that appears in all apps, but an interesting model is starting to evolve,” Marsden noted. “Some app developers want to license Dryft for use in their apps, and we’re also soliciting app developers who would be interested in an SDK for Android, iOS or Windows Phone.”

Tell us about some of the design choices you made?

Normal keyboards take up a majority of the screen, but Dryft keyboard is semi-transparent so you can through it. The F and J keys are bigger too since they’re what we’re tracking.

Will different device screen sizes be an issue for Dryft?

Dryft is for two hands, but there is an in-between we’ve been working on for only one hand. It’s not ready yet, but we plan to apply Dryft tech to one handed typing soon.

Will you defend from an IP perspective?
Yes, and it already is.