Ali Rehan and his university cohorts had just won Pakistan’s Startup Weekend hackathon when they decided to quit their PhD research project to build a photography app. Weeks later they were offered a $100,000 investment for 60 percent equity in Eyedeus, as their fledgling startup is called. The money on its own was a tantalising offer in Pakistan’s nascent ecosystem, but it would mean ceding control from a very early point.

So the almost-PhD-grads from Syed Babar Ali School of Science and Engineering at Lahore University of Management Sciences (Rehan “barely” graduated from his masters course) rejected the offer from the unnamed investor and instead took up residence in Plan9, a government-backed incubator that allowed them to remain 100% shareholders. Six months later Eyedeus has completed a gruelling mentoring program, launched Groopic, an iOS app which superimposes photographers into their group photos, and the team is weighing up their next options for expansion.

“We came from one of the best schools in the country, with a great track record of top quality research in the area, and we were a strong team,” Rehan said. “We believed that we could do it ourselves [but] there was much more than [VC] money that we needed.”

“A lot of other entrepreneurs accept those kinds of deals, but this is what Plan9 is trying to change through their program, campaigns, and angel investments group.”

The group’s story represents a new chapter in Pakistani entrepreneurship, which is being underwritten by startup incubators and accelerators popping up across the country. They provide the financial support and business networks required to turn an idea into a minimal viable product, and ultimately a business. It’s the foundation of the country’s tech entrepreneur evolution.

Last year, the Punjab Government established Plan9, an incubator offering a six-month program providing business facilities, a small stipend ($200), and connections to mentors and investors. It recently accepted a second batch of startups into the program, which doesn’t take any equity.

There are other options for entrepreneurs. There’s the social enterprise-focused i2i investor/mentor network which has just selected a second batch for its own accelerator program, which covers new businesses in a number of areas like agriculture but still with a tech underpinning. The recently launched co-working space Dot Zero in Karachi also aims to provide resources for tech startups.

While this publicly-funded, no equity incubator model is being used to seed Pakistan’s startup ecosystem, similar spaces in the west have been used to align the interests of entrepreneurs and corporations. Microsoft’s BizSpark and accelerator program offers startups access to free office space as well as the company’s software, while the BBC recently established its Worldwide Labs for digital media startups that could potentially partner with the UK media giant down the track.

The activity in Pakistan has caught the attention of investors.

DYL Ventures founding partner Adam Dawood said these incubators are creating a pipeline of deals that previously was dry. As more investments are made, both parties will learn how to structure fairer investment terms for Pakistan’s corporate environment — avoiding the situation that befell Ali Rehan.

“Local investors are here to fund, but they want to fund in very specific areas,” Dawood said.

“Plan9 is useful because it gives investors a one stop shop where they can find entrepreneurs and startups. Although plan 9 also has a lot of learning to do in terms of how to add value to their startups I suspect this will happen very quickly add each new batch enters. They have a strong team who are very enthusiastic and motivated to make the program the best in the region.”

Khurram Zafar, board member of Plan9 said the country’s entrepreneurial ecosystem faces a catch-22 situation: there needs to be liquidity and dealflow for investors to hedge their risk, but for this you need some funding to bootstrap startups.

He said the government had to intervene.

“It’s a chicken-and-egg problem. This is a way to bootstrap the entrepreneurial ecosystem, and very soon we’ll see private companies get involved. 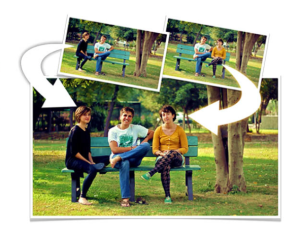 Groopic allows the photographer to insert themselves in the photo.

He was reluctant to take credit for the success of Rehan’s Groopic and other graduates, saying the incubator program simply exposed them to investors, locally and overseas — for example, it sent Groopic to Google’s Blackbox event in Silicon Valley as well Startup Asia 2013 in Singapore. Plan9 also funded one of its graduates, Rocxial, to take part in the LaunchPad Denmark program, supported by the Danish Ministry of Business.

However, it hasn’t all been smooth sailing.

Plan9 conducts reviews every six weeks to ensure that startups are on track. After one and a half months they should have a business model developed based on real world feedback; at the three-month mark they should put their alpha product in front of early adopters; and at 4.5 months they should introduce iterations to refine their market strategy. If they can’t meet their goals, they’re out of the program.

Of the incubator’s inaugural round, only eight of the 13 startups graduated.

“The others were eased out. They weren’t serious or committed enough, or they just couldn’t pull it off.”

Rehan and his friends were just one of eight teams to have graduated from Plan9’s inaugural incubator class, but it appears there are more of their kind out there. More recently, Pakistan emerged as one of the world’s biggest locations for individual outsourcing via sites such as odesk, elance, and freelancer.com.

The social and political winds are also shifting.

Internet and cloud technologies have lowered the barriers to entry to compete in the global digital economy; and among Pakistan’s 183 million strong population there are almost 30 million internet subscribers. Meanwhile, voters recently appointed the second successive democratically elected government — the first time that’s happened in the 64-year troubled history of a country whose progress has been sabotaged by regular military coups.

Pakistan perhaps has not enjoyed the IT outsourcing success that other developing nations, such as India and the Philippines, have, but young citizens are now writing a new chapter in the country’s technology evolution. Zafar believes that IT services companies were deterred by the frequent reports of drone strikes and terrorist attacks but said consumers don’t care about where a product is developed.

“They don’t dig enough into the news to figure out what the incident was or where the place was, they just correlate ‘drone strike’ with Pakistan and have this image of a country that’s troubled, but that is happening in the north and in the tribal areas,” Zafar said. “The perception is disastrous for the services industry, but we’re not interested in IT services. What we’re doing at Plan9 and other incubators is we’re trying to encourage and incubate product companies, and leverage the limited tech talent we have. At the end of the day, people use products through phones, laptops, and desktops, and they don’t care about where it’s from, as long as it works well.”