I’m sold. One picture did it. The one above by Josh Miller at CNET. I want the Samsung Galaxy Gear smartwatch. It doesn’t matter if the UI is sluggish. I don’t care if it requires charging once a day. I don’t even care if Samsung overloaded it with applications, which seems to be the case. I’m not going to buy it. But my inner nerd really wants it. The Galaxy Gear watch is hot, even if it has a critical flaw.

Samsung just beat Apple to the punch by a large margin. But that should be expected.

Samsung is a different company than Apple. Samsung iterates where Apple innovates. Samsung releases a first generation product that’s far from perfect. The first Galaxy Note was large enough to kill a man and was too slow for general use. The original Galaxy S was one of the worst Android options when it was released. Remember the Samsung Galaxy Tab? Yeah, twice as thick as the Nook Color and seemingly half as fast.

But this works for Samsung.

Apple on the other hand waits until they can release a product that’s nearly perfect. The original iPad was in development since at least 2002, eight years before the original hit the market in 2010. And even since then the product has simply seen updates. The first big overhaul is rumored to hit just this year.

And this works for Apple.

Yet, the consumer electronic scene is a different world than it was when Apple and Samsung first became the two superpowers. Samsung has a massive following now. Samsung has sold tens of millions of Galaxy S III and IV smartphones. It’s the leader in Android and general tech enthusiasts look to Samsung for innovation the same way they used to look to Apple.

Apple will likely follow its tradition of waiting until its smartwatch is ready. And now they have a good look at their main competition’s high and low points. 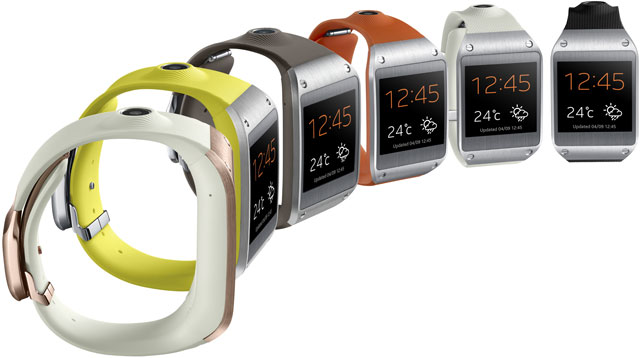 The Galaxy Gear watch seems to hit most checkboxes. The watch’s design is fashion-forward without being completely nerdy. It’s available in a wide range of colors. And it packs a good amount of tech including a camera into a modest-sized frame. The screen is attractive. It’s open to applications and there’s even a camera in the wrist band, because why not. And you can actually take calls on the thing by holding it up to your ear.

Engadget reports from some hands-on time with it that the UI is a bit sluggish and occasionally unresponsive. The S-Voice is not entirely hands free and the battery will only last a day. But this is Samsung. Those items will get better in the second generation.

By far the biggest drawback is the Galaxy Gear, at least at launch, is only compatible with the Note 3 and the new Note 10.1. It will likely work with the GS4 somewhere down the line, but it will require an update. Samsung has yet to say if it will work with any ol’ Android device. It’s very unlikely that it will ever work an iPhone in the same way Apple’s smartwatch will likely not work with an Android device.

There are also several smartwatch upstarts attending Disrupt next week and will be exhibiting in Hardware Alley. Samsung’s entrance into smartwatches will help move the market from niche to mainstream. As long as hardware startups can differentiate themselves from Samsung and eventually Apple, there is still plenty of money to be made in this growing market.

Should you buy the Galaxy Gear? Nah, wait for the next one. Or Apple’s smartwatch. That’s what I’m going to do. A Pebble is good enough for me until then. But I still want this one. Well done, Samsung.