With the NFL season just a week away, fans are poring over stats, trash talking their friends, and gearing up for the real season: fantasy football. The national phenomenon has spawned five seasons of a TV show, The League, has NFL teams refitting their stadiums so that fans can track their teams more closely, and costs businesses billions of dollars a year due to distracted employees.

So, easily distracted employees, here are the coolest and most useful places to play fantasy football out there—from the household names like ESPN to a small startup that’s doing fantasy exclusively on your phone. I didn’t rank them because a lot of deciding “which one is best” depends on what type of player you are and what fits you.

ESPN has been my go-to for years now. It has an awesome interface that’s easy to use–especially the drafting tool, a great mobile app that it’s improved this offseason, and solid player rankings. ESPN’s Livecast, which shows you the scores of all the NFL games alongside your fantasy matchup in real time, is a godsend. ESPN is my personal favorite, and whether you’re a fantasy rookie or a seasoned veteran, you really can’t go wrong with it. 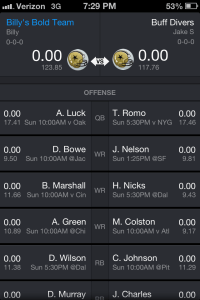 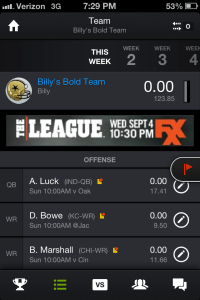 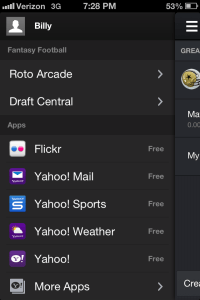 The old Yahoo fantasy football app was like watching the Oakland Raiders play. You could tell it was supposed to be (fantasy) football, but man it was awful.

The company redid their app this summer, and it’s a huge improvement. One of my leagues just switched from ESPN to Yahoo, and I have to say the two are about even so far for me. Yahoo has a nice, easy to navigate mobile app, and had a really smooth drafting tool. Yahoo even gave out report cards for each team grading their drafts right after it concluded, which was a fun little feature. The app itself prominently displays links to Yahoo’s other mobile apps, which is smart and may further Yahoo and CEO Marissa Mayer’s refocused on the company’s mobile apps.

Check out our new @YahooFantasy app – thanks @TIME for the rave review! http://t.co/ieA3VZdl1Q

In football, the flea flicker is a trick play where the running back takes the ball and runs towards the line before turning and pitching it back to the quarterback who then throws it downfield. Fleaflicker the site is anything but a trick play–more of a dive straight up the middle. The old school site hearkens back to a simpler time, before mobile apps and big ESPN and Yahoo sites with beautiful displays, when people drafted on big boards in their basements, adding up stats on pencil and paper.

Fleaflicker goes with a clean, simple spreadsheet look that does a good job of feeling like old school fantasy football, while still offering real-time scoring and other modern-day features. It’s super customizable for the hardcore fans out there, but also has a really simple interface for the beginners.

Fanium has an interesting take on fantasy, going solely mobile. The interface is super simple, with very little information. But this is a double-edged sword, as there are few stats or insights to look up if you really want good info on your players.

I participated in a Fanium draft (8 teams, 16 player each), and each player was given up to eight hours to make their selection. The draft went from Thursday afternoon to Tuesday morning, as not everyone was right near their phones all the time. I had mixed feelings about the draft—it felt a lot like fantasy football for people who find fantasy to be a chore. I love gathering together and smack talking during a few hour-long draft.

In many ways, Fanium is the antithesis of Fleaflicker and My Fantasy League–it’s not customizable, with rigid preset roster sizes, and is missing some of the classic elements of fantasy football, like kickers and defenses. 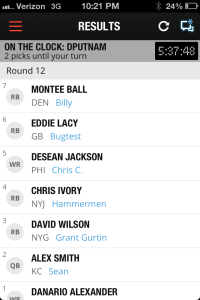 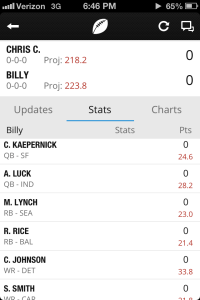 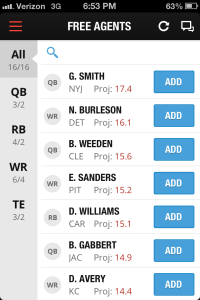 At first, I didn’t like it. It felt like fantasy football for people who don’t like fantasy football. But it is a really fast, lightweight app, which is awesome if you’re out all day Sunday checking your fantasy team while watching the games. Fanium is a great intro to fantasy football, as it isn’t much of a time commitment or too much to understand, but still maintains the key awesomeness of fantasy. It could also be a great accompanying app, with the more hardcore players using something like Yahoo or ESPN and the more casual fans using Fanium. We know Yahoo loves to make acquisitions, even fantasy football startups…

The Best Of The Rest: NFL, CBS, FOX

These three are fine places to play fantasy football. I just don’t understand why you’d play on one of these sites when the experience you’re looking for will be better on ESPN or Yahoo. All three have pretty good unique content and offer the typical fantasy settings and features that veteran players are used to. CBS and the NFL have nice mobile apps, but I strongly prefer Yahoo’s and ESPN’s. Fox doesn’t even have a mobile app (seriously, what are you doing, FOX?) for their fantasy game.

Most of the smaller offerings out there are slight tweaks on the existing game. If a startup really wants to make an impact in this space, they need to make their core offering different. Several options immediately jump out:

Despite the comparable popularity in college football, no one has really cracked a good way to make fantasy football fun and engaging for college teams. The leagues are inherently very different, and current fantasy is largely based off of the NFL style—win as many games as you can to make the playoffs, keep your team healthy, then ride hot players and some luck to a championship (or so they tell me—being an Eagles fan, I can’t confirm anything about winning championships). But the college game is very different—strengths of schedules and conference matter a lot more, and the goal is to go undefeated and land in the top two—err, four—spots to compete for a championship. Basing a league off of this would be an interesting departure from the typical NFL-centric leagues.

Most of the people I know who do play a version of college fantasy football have made their own systems for tracking and awarding points, as fans are left with very few options if they want to really customize their leagues. Give users an insane amount of options—essentially just the software and storage for whatever league they want to create—and you could grab a nice niche of fans who want to branch out and do their own thing.

And fantasy leagues have failed to capture the impact of individual defensive players on the game rather than merely defensive units. One running back typically has a much larger impact on a fantasy game than an entire defensive and special teams unit, which is obviously not how the actual games work. Offensive players are much easier to track, as their individual accomplishments can be recorded by how many yards and touchdowns they have, whereas solid defensive coverage or touchdown-saving tackles are harder to objectively measure. But sports statistics are getting more and more advanced, and someone will be able to figure this thing out sooner or later—might as well be the little guy or they have no shot in the long run against ESPN and Yahoo. 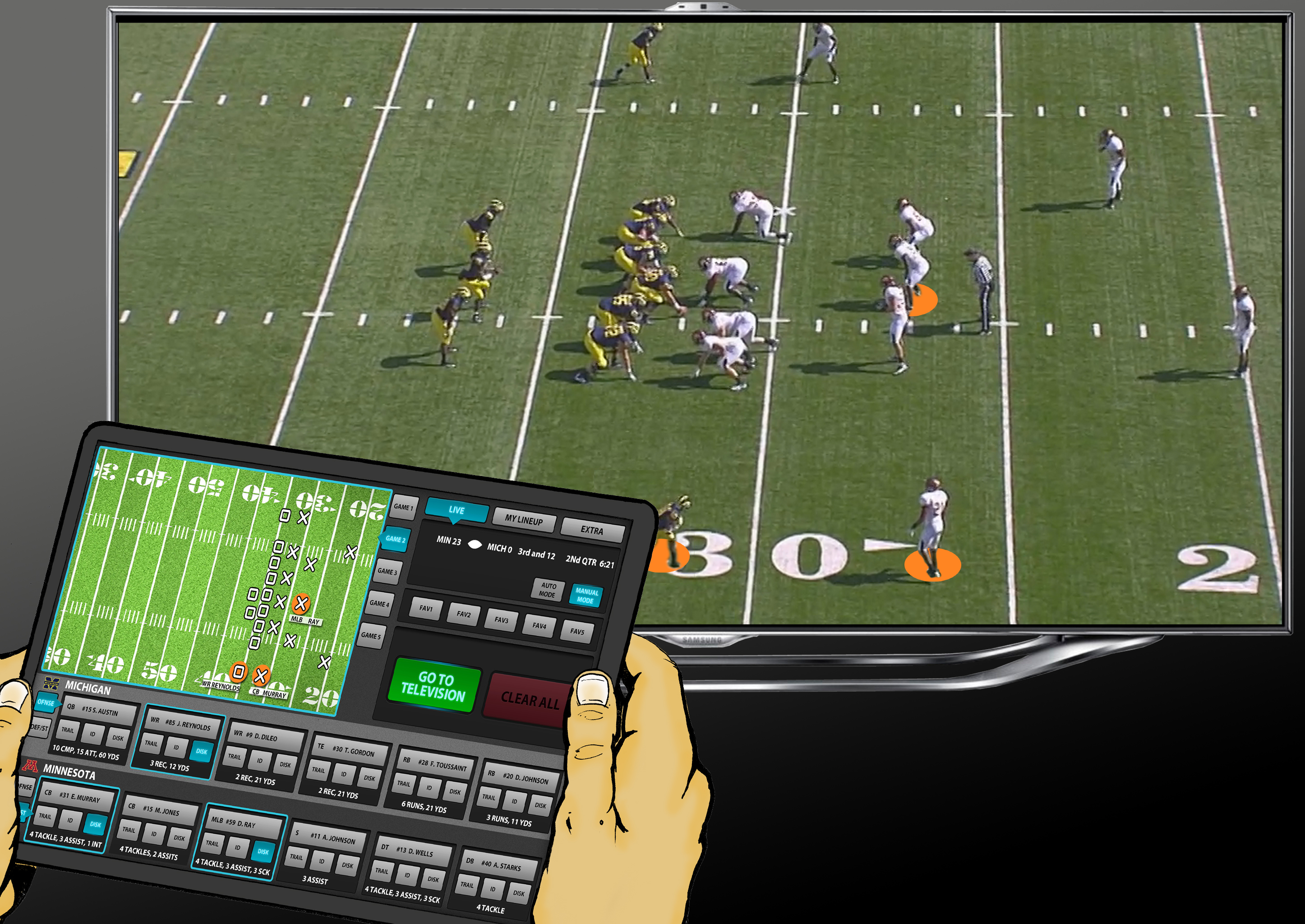 And as much as NFL Red Zone has attracted diehard fans who want to watch every touchdown, the bridge between fantasy football and watching games live leaves much to be desired. Whether its DirecTV and its Sunday NFL ticket package, ESPN and its potential web-based TV, or another company, users would go bonkers if their fantasy rosters were connected to live games on their TVs. Sportvision, the company that created the first down line for TV, is working on technology that would allow viewers to see their players highlighted on the field (you can see Sportvision’s early mockup of this above).

Well, that about does it for me. Good luck out there, and don’t draft Aaron Hernandez. Once you’ve picked a site to host your fantasy league, Eliza Brooke has you covered with six tools to help you dominate your opponents.