Newark Mayor and Senate candidate Cory Booker has just begun testing an innovative solution to the racial problems plaguing law enforcement’s use of stop-and-frisk: hold officers accountable by making details of every stop accessible to the public. The controversial practice of “stop-and-frisk” allows police officers to pat down any citizens for looking mildly suspicious; law enforcement claims it’s a vital tool against crime in overcrowded cities, while civil liberties groups claim that it unfairly targets minorities (In New York, minorities make up 90 percent of all stop-and-frisk incidents).

But while NYC Mayor Michael Bloomberg is fighting civil-liberties groups to keep the practice, Booker worked with his local American Civil Liberties Union to find a solution in radical transparency. Every month, Newark will release stop-and-frisk incident reports, detailing the race, gender, age, forced used, and arrests made. “It’s a win for police officers, because they’re able to gain the trust of community members,” says Udi Ofer, head of Newark’s American Civil Liberties Union. “It’s a win for the public, because the public is then able to decipher whether there is any abuses taking place.”

For those unaware, stop and frisk, by any measure, is a pretty broad tactic. According to the Center for Constitutional Rights, only 1 in 143 NYPD stops of African Americans result in a seizure of guns, drugs or other weapons. 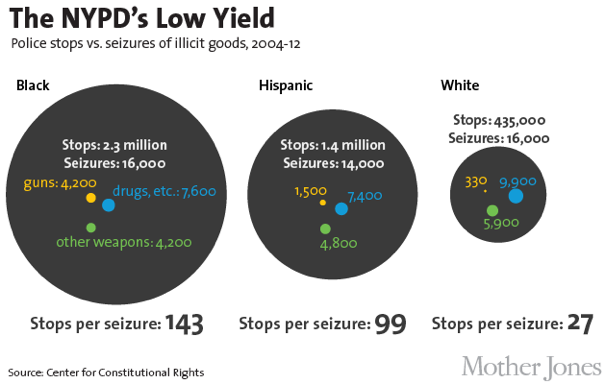 And with decreased oversight, opportunity for police aggression is ripe. For an undercover look, see @3:05 in the YouTube video below of an actual stop and frisk.

Even though most people wouldn’t consider themselves racist, many of us may harbor latent biases. For police, seeing the same minority violence on a daily basis may exacerbate the prejudices we all hold.

“What the public sees as “racially charged” is often driven not only by implicit biases, but by poor communication and a history of mistrust between some communities and the police who are sworn to protect them,” explains University of California, Los Angeles Professor Philip Goff, to me in an email. “In other words, it is not possible to understand bias in policing without understanding human nature, and our tendency to misinterpret others we fear might be dangerous”

Releasing data on stop-and-frisks is a friendly way for police to admitt unintentional potential racial bias. With nothing to hide, authorities can admit wrongdoing without losing face, working cooperatively with community members to investigate the truth. For instance, it’s possible that officers are not racially biased, but geographically biased, unintentionally concentrating resources in particular communities.

“Being more transparent in their practices will lead to better relations with the community, which will which then lead to a safer city,” says Ofer.

Transparency isn’t just about protecting civil liberties; it’s also about communities helping to make their neighborhoods safer. Digging into the data could yield valuable insights that law enforcement analysts don’t have time to think about with their limited staff.

For instance, perhaps officers are finding too few white females with drugs, while stopping too many middle-aged African-Americans for suspected gun possession. After comparing stop-and-frisk success rates to the demographics of those actually found guilty, researchers will help police find unusual sources of crime. So, in the course of looking out for African-American civil rights, independent statisticians may tip off authorities to an unknown pipeline for drug distribution and help officers better identify who in the neighborhoods are actually carrying weapons.

Forgive my math-nerdy excitement here, but there are all sorts of fun statistical patterns we can find in the data, which puts everyone on the same side of finding out the truth and saving lives.

Of course, all of these wonderful benefits are theoretical. For now, the police dump the monthly data sets in clunky PDF files, which are a real pain in the neck to convert into spreadsheets for statistical analysis. Newark Police need a few developer friends who can put their data up on stat-friendly websites.

Even more problematic, the data input is done entirely by police. That’s like asking a student to grade his own homework. Even with the best of intentions, all the reporting is still held hostage to psychological biases.

This problem is why Ofer, for the first time to TechCrunch, publicly endorsed the use of police lapel video cameras, similar to the dashboard cameras currently on police cruisers. Only when the public is able to review the stops as their happen from the officer’s perspective, can we truly know all the data, and the intentions behind the stops.

We’re always thrilled when public officials offer innovative solutions. When we named Cory Booker one of the Most Innovative People In Democracy, we had hoped he would continue to impress us.

As a Senate candidate, Booker’s star power and general popularity are paying off. According to a new CrunchGov poll we conducted with Google Surveys, Booker leads his Republican opponent, Steve Lonegan, by 25 points among self-reported registered voters in Newark (60.9% vs. 34.5%). For more details about the poll, click here.

Mayor Cory Booker will likely become Senator Cory Booker next Winter. Should that happen, we hope he continues to break new ground.