The declining quality of humanities education (and student performance) in the U.S. has become a big problem. Last year, the College Board reported that SAT scores in reading and writing have hit record lows, while this year, the state of New York revealed its new, Common Core-based test results, which found that only 31 percent of its students in third through eighth grade met the standard in language arts.

Jeff Scheur launched NoRedInk last fall to address the flagging performance of American students in writing and grammar proficiency — an area that is getting less attention now amidst the growing interest in STEM education as a potential solution to the country’s economic woes.

Having spent eight years as an English teacher in Chicago — during which time he estimates that he graded more than 15,000 papers — Scheur is intimately familiar with students’ struggles to master writing and grammar concepts. But, while his experience might make him uniquely qualified to both understands how students are struggling (and why) and, thus, to construct a solution, that’s just the beginning.

The pressures of balancing the demands of building a mission-driven product or service with developing that idea into a real company — that is to say, to make money — is something that every EdTech entrepreneur wrestles with. It’s led to the demise, or compromise, of many education companies. But last week, Scheur became the envy of many early-stage education companies, closing a $2 million round of series A financing from a handful of top venture capital firms. 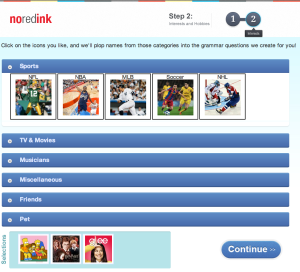 Not just because of NoRedInk’s roster of investors — which include Google Ventures, Social+Capital, Learn Capital, Kapor Capital, NewSchools Ventures and Charles River Ventures — but because of what it will allow the startup to do. Early-stage entrepreneurs often focus too much on fundraising and courting investors to the detriment of the product and taking on venture capital would seem to only increase the pressure to monetize and distort the company’s mission with hastily-concocted business models.

The new capital will allow Scheur to put off having to monetize his adaptive grammar learning platform, which means that the company is relieved of having to charge schools, or establish premium subscriptions, and instead simply let schools use it for free. Eventually, however, NoRedInk will likely have to charge schools for use, but luckily for the company, Scheur tells us that hundreds of schools have expressed their willingness to pay for premium tools.

The proof is in the pudding: Over the last year, NoRedInk has seen 12,000 schools sign up to use the free version of its platform, while students have answered 33 million questions through the site. Thus far, the heft of this adoption has happened organically, thanks in part to the relative dearth of writing and grammar-focused learning tech out there, especially when compared to the amount popping up in STEM education.

Schools are starved for quality digital tools that can help students practice grammar and writing skills, while giving teachers a better sense of what students understand and what they need to improve. It also doesn’t hurt that Scheur is a teacher himself and understand what teachers and schools want from grammar learning technology.

The other two factors that have contributed to NoRedInk’s rapid adoption among teachers begins with the fact that Scheur designed the platform to enable teachers to avoid practice and instruction that relies on rote memorization and rigid multiple choice-style assessment and instead focuses on high level concepts. The other is a focus on creating grammar tools that students will actually want to use, which, granted is far from being an easy proposition.

To boost engagement, NoRedInk prompts students to tell it about their favorite sports teams, TV stars and subjects, serving questions that are based on their actual preferences and not those of a 50-year-old English professor. Sure, seeing Lady Gaga in grammar exercises isn’t enough to get students over the hump in and of itself, but it’s a step up from most textbooks and grammar worksheet exercises. 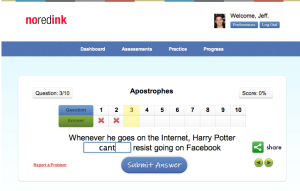 Plus, the platform avoids multiple choice-style questions, instead allowing students to type out their answers and, when they make a mistake, the platform automatically identifies the problem and alerts the student to the error. It then serves them with follow-up exercises and tutorials that focus on the areas they’re struggling to understand and provides teachers with an overview of each student’s performance, broken down by exercise so they can tailor instruction accordingly.

The idea, Scheur says, is to give kids confidence in their grammar skills — something that’s critical to understanding tricky and often non-sensical rules and concepts, especially as they build on each other and early mastery is critical to later performance. The NoRedInk founder also hopes that making grammar fun in such a way that allows students to apply their skills to writing, improving the quality and understanding of both at the same time.

In September, the startup will begin releasing “grammar categories,” which will allow teachers to offer grammar challenges based around a particular group of tools and exercises for free. Scheur started with “Capitalization,” with hyphens, colons and pronoun cases set to come next, choosing the categories based on feedback from teachers.

NoRedInk is growing fast, and though grammar learning isn’t the sexiest of disciplines within the educational spectrum, it’s critical to improving the system and producing students that are confident in their reading and writing skills. The sad truth is that the world is full of atrocious writers, so NoRedInk is doing all of us a favor, and for that we’re grateful. Take it from my ghost writer — she’s a doctor.