After Google acquired Motorola Mobility last year, I wondered what was next for the smartphone company. It spent ages clearing out its pipeline of smartphones that were already in development before rumors of an X Phone made in America started making the rounds. In those early X Phone days, Rick Osterloh, Motorola’s SVP of Product Management said the team that worked on the device was plopped in front of a whiteboard and asked to describe the product they wanted to make. That brainstorming, plus loads and loads of user testing, came together in the form of the Moto X.

Motorola isn’t the same company today as it was when Google snapped it up last year — it’s smaller, leaner, and if recent reports are indication, gutsier than ever. The Moto X is that new Motorola’s coming out party, and I think they’ve finally got something worth celebrating. 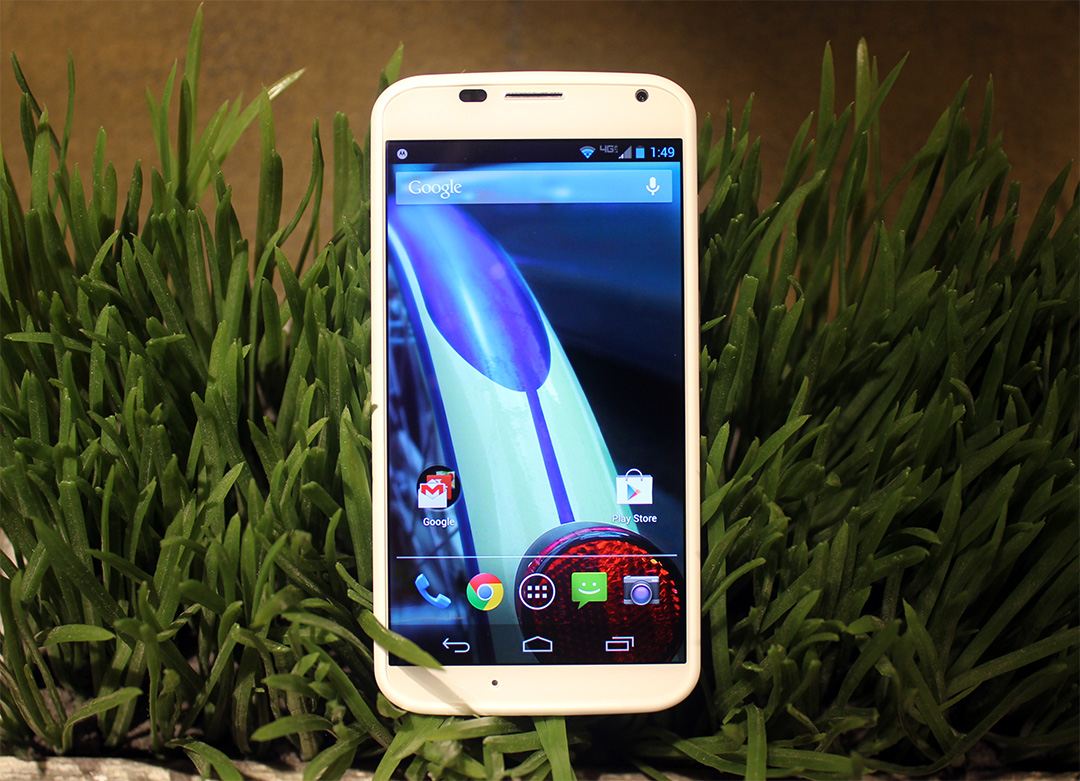 Before I launch into a lengthy harangue about how this phone makes me feel, let’s dig into the X’s vital statistics. Just about those rumors were true, folks: 4.7-inch AMOLED display running at 720p? Yep. 10-megapixel “ClearPixel” camera with 1080p video recording? You bet. Android 4.2.2.? Check. microSD card slot? Sadly, no. That would all make for a decent, if unremarkable little smartphone, were it not for what the Moto X packs inside its plasticky frame.

The real star of the show Motorola’s X8 chipset, which actually consists of a 1.7GHz dual-core Qualcomm Snapdragon S4 Pro, Adreno 320 GPUs, 2GB of RAM and specialized processors meant to handle natural language processing and information from the X’s myriad sensors. If that thing sounds familiar, well, it should.

Verizon and Motorola’s recent Droid launch took some of the shine off the X’s more intimate event this morning. Why? A lot of the X8-centric features that seemed to make the Moto X so smart — those always on voice commands, the motion-sensitive Active Display, and the twisty camera activation gesture — will in all likelihood wind up on most of Motorola’s new phones going forward, the Droid Ultra line included.

Oh, and the device is expected to launch very soon. Think the end of August/early September — it all depends on when Motorola’s carrier and distribution partners make their announcements. Speaking of carriers, AT&T and Verizon will both sell the 16GB black and white versions of the X for $199 (on contract, of course) when it launches later this month, but only AT&T customers will able to customize them using the MotoMaker website. Additional caveat: it seems like the 32GB storage upgrade can only be purchased from MotoMaker for the time being, which is frankly pretty lame.

Not a particular fan of either carrier? That’s fine too: the Moto X will also be available for purchase as an unlocked device, and as a developer edition with an unlocked bootloader (for easily hackability), though Motorola doesn’t seem to have locked down pricing for either version just yet.

Easily the most impressive part of the Moto X package though is how users can customize it using Motorola’s MotoMaker web app. When it goes live later this month, users can pick from some 16 colored resin back plates, as well as a black or white front facade, and seven accent colors for your volume and sleep buttons. And in case you were wondering, yes, there is a wood case in the works. It’s apparently undergoing some late-stage testing, but should hit proverbial shelves in Q4 of this year. Throw in the ability to engrave your name (or whatever, really) onto that backplate and you’ve got yourself a pretty tremendous level of choice here.

While we’re talking about how the X is put together, it’s worth pointing out that Motorola isn’t giving up on its global supply chain here. U.S. customers who order customized Moto X’s will get units assembled in Texas (and in four days or less to boot), but the rest of the world will get their X fix from the usual slew of foreign manufacturers.

Motorola is gearing up to make itself a purveyor of a smarter kind of smartphone, but it does mean that there were few surprises to get worked up over this morning. Even so, the X is exciting for what it represents. It’s hard not to think of the X as Motorola’s take on Google’s Nexus concept — the phone itself is a template for Motorola’s vision of mobile computing. But what’s it like to use?

Motorola’s clearly all about making the phone your own thanks to its MotoMaker customization options, which is a good thing because the untouched black and white Xs look pretty damned dull. That’s not to say they’re ugly — the composite weave pattern on the back is handsome and distinctive, and the whole thing exudes a sort of minimalist charm, but it feels like Motorola’s main concern with these default builds was to keep design from getting in the way of functionality.

The X feels surprisingly small for a device with a 4.7-inch screen since there’s very little physical cruft — there’s only a hint of a bezel running around the display’s left and right edges, and there isn’t a whole of space surrounding the speaker, 2MP front-facing camera, and microphone along the face’s top and bottom. It’s awfully comfortable too, owing largely to considerable curvature of the X’s rear end. Osterloh said that the device’s 2,200mAh battery was specifically engineered to fill up that shapely rump, and he expects the device to last up to 24 hours on a single charges thanks to the X8 chipset’s power-sipping tendencies — we’ll see about that.

And then there’s the software. On one level, it’s all very familiar — the X runs a very lean build of Android 4.2.2, and you could easily mistake it for stock if you didn’t know what you were looking for. And I don’t doubt that a decent chunk of people will use it that way, but there’s plenty to like when it comes to Motorola’s additions.

So far, the touchless controls work like a charm (even those this is technically non-final software). Once a brief setup process was completed, I successfully asked the X to give our video producer Steve a ring and do a Google search for “TechCrunch”. Meanwhile, a few vigorous shakes coaxed the X into firing up its camera, and flipping the thing over and over caused the active display to show off the time and how many messages I had waiting for me. And since Android is largely unencumbered here, whipping through pages of apps and scrolling through webpages was generally very smooth — though it could be smoother.

I’m reserving final judgment on this thing until I’ve had the chance to play with it for more than three hours, but I actually rather like the X. Do I wish Motorola could have pushed the technical envelope further? Sure. I also think the customization angle, neat as it is, is essentially a ploy to make an unassuming phone stand out in a crowd. And frankly, it’s a little frustrating to see that a solid chunk of what the Moto X can do will soon be replicated by — you guessed it — just about every other new Motorola phone in the works.

It’s far, far too early to tell if Motorola has a hit on its hands — especially because the X will ultimately compete with Motorola phones with similar feature sets. If nothing else though, Motorola’s X represents a dedication to creating a smarter breed of smartphones, and I doubt that’s something the rest of the industry is going to ignore.