Hit ’em with a television commercial, then with a Twitter ad to really drive the message home. That’s the promise of Twitter’s TV Ad Targeting it’s rolling out to all US advertisers today after its beta launch in May. Twitter’s Nielsen studies say the combo deliver 95% stronger message association and 58% higher purchase intent than TV ads alone.

Twitter’s also hooking up advertisers with an improved analytics dashboard that pulls in what users are saying about their ad campaigns. That could help businesses refine their ads for maximum impact and retweetability.

Say Nike runs a TV commercial campaign for its new Air Jordans across several shows and networks. Twitter tracks exactly when the ads are shown and on what programs. It then looks for people tweeting about those shows by naming or mentioning the show, or using the right hashtag — people that are likely to have seen the Nike commercial. Twitter TV Ad Targeting lets advertisers target these people with Twitter Promoted Tweets ads that show up in their stream. Those could include pure text tweets reinforcing the commercial, a link they can follow to learn more or make a purchase, or even a Vine to give viewers a second dose of video marketing. 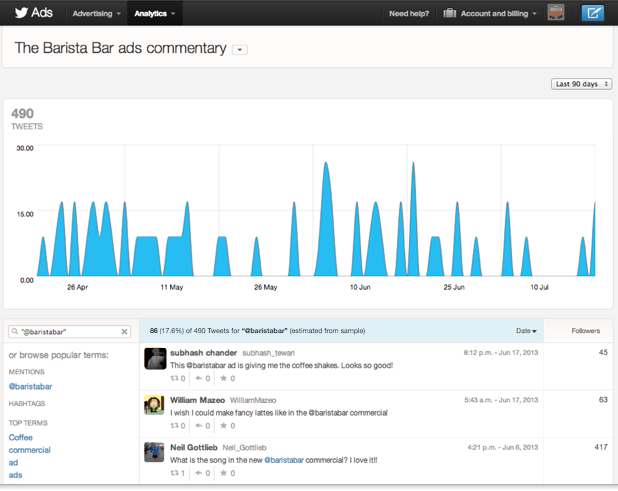 The new ad tech is based on BlueFin Labs, a TV analytics service Twitter acquired in February. BlueFin’s co-founder Michael Fleischman says that its video fingerprinting tech lets Twitter automatically detect when a TV commercials airs so brands don’t have to give Twitter a heads up. That means these ads can easily complement existing TV campaigns without a ton of work.

Now Twitter isn’t the only place people are talking about TV. Trendrr today put out a study in partnership with Facebook saying that despite the widely held belief that Twitter rules real-time chatter, Facebook sees five times as much TV-related social activity as all other social networks combined, including Twitter. Trendrr was given special access to the data by Facebook, so it should be taken with some salt. The study also tallies Facebook Likes and comments as well as posts and shares, which don’t exactly match up to @ replies and favorites…if those Twitter feedback activities were even properly counted. It’s important to know whether Trendrr’s data treated Twitter fairly, so I’ll be talking to Trendrr shortly about methodology.

[Update: After speaking with Trendrr, the way it looked at Facebook and Twitter seems like more of a “apples to oranges” comparison. Trendrr tells me it was measuring Facebook Likes but not Twitter favorites, making this an unfair match-up. It’s also important to understand that how much social activity around TV each network generates is only a piece of the puzzle. How many people actually saw that actvitity is critical to an accurate comparison, and that’s difficult because Facebook uses a filtered feed that doesn’t show everything but keeps important posts visible for long periods of time, while Twitter’s unfiltered feed shows everything but all posts get washed away as more tweets flood into the stream.] 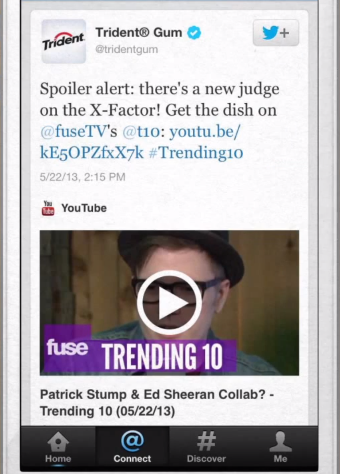 Of course Facebook has five times as many users as Twitter, so it’s not necessarily doing TV chatter better, it’s just bigger. Also, if Facebook does have more chatter, it’s not taking as strong of advantage of it as Twitter is here. Facebook has been publicly focusing its advertising efforts around retargeting and matching offline purchase data to users. Meanwhile, Twitter seems to be making big advances in semantic recognition of what people are talking about and how that can target ads. This could let it appeal to brands with big TV ad budgets that might be apprehensive about Facebook’s new-fangled ad services.

Tell me once, and I’ll forget. Tell me twice and I might keep your brand in mind the next time I’m shopping. If used creatively, Twitter’s targeting could let businesses create a marketing narrative that tells a deeper, more interactive story than a commercial locked inside your TV can. Twitter can’t be 100% positive you weren’t in the bathroom or making a sandwich while the TV commercial aired, but it’s sure enough to be able to sell the targeting and directly monetize its place as a home for discussion of real-time events.