Salesforce.com has taken a $300 million loan from Bank of America to pay for its acquisition of ExactTarget which it acquired in June. The loan, when considered in the context of other debt, is reducing the company’s cash resources, signaling a potential cooling in its acquisitions.

According to an 8-K filed today with the Securities and Exchange Commission (SEC), Salesforce completed the loan last Thursday as part of closing the deal with ExactTarget. The total payment on the loan is due in 2016 and payable in quarterly installments equal to $7.5 million beginning at the end of September.

The company’s stock hit a high in May but since that time has dropped from $48 per share to as low as $36. Today the stock is hovering around $42 per share.

Skepticism about the ExactTarget acquisition and its value has contributed to the drop in confidence. There are also financial questions about the acquisition that stems from its continued debt load and low cash resources.

Salesforce has a history of posting net quarterly losses, which have taken their toll. In March, the company issued $1.15 billion in convertible debt. That had a remarkable influence on the company’s working capital, giving it about $146 million in surplus as reported today by DailyFinance.com. It was only a temporary measure. The intent, apparently, was to use it for financing the ExactTarget acquisition. 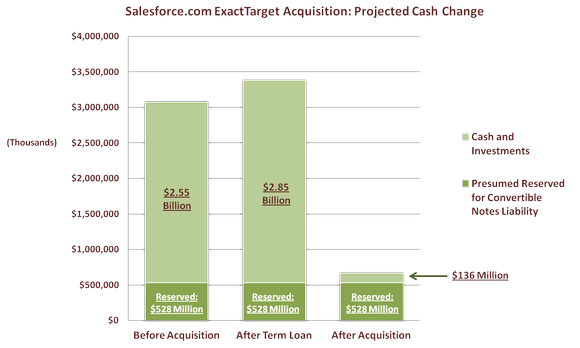 The company also has $528 million in debt stemming from convertible notes it issued in 2010. Reserves will have to be kept on hand in case the notes get converted.

The DailyFinance rightly shows the impacts on Salesforce. It is in a market with competitors that are much larger and have deeper pockets. IBM and SAP have made larger acquisitions but also have significant working capital.

Salesforce has to stretch its cash to make acquisitions while its competitors have fewer concerns in that regard. But the larger companies have legacy technology and difficulty keeping up with the new generation of SaaS and mobile providers. Salesforce has always been an aggressive company. Its aggressive debt financing is evident of that. The question is how long will it now have to wait before making its next major acquisition.