Seemingly tired of being chewed out by every third traveler to step through their scanners, the TSA is trying something new to connect with the people: Instagram. And, uh… it’s actually pretty friggin’ effective.

Over the last few days, the TSA has been Instagramming some of the crazier things they’ve confiscated at their checkpoints from people who apparently didn’t get the whole “don’t bring things that can kill people on planes” memo. Guns! Grenades! Secret spy knives!

This one is probably the strangest so far, confiscated in Cleveland: They’ve been posting one or two pictures per day, mainly focusing on the zanier stuff — from a knife hidden in a belt buckle to a stun gun disguised as a pack of cigarettes.

And yeah, as you might expect, the account is spreading fast. The old saying suggests that a picture is worth a thousand words; here, a picture seems to be worth about 1,600 followers. They’ve posted just 10 images so far since launching just days ago, but already have 16,000 people following the account. That’s already half of the following they’ve amassed on Twitter, and they’ve been tweeting for years. Anyway, You can find the TSA’s new instagram account and all of the crazy contraband that comes with here. (If you’re dubious that it’s really the TSA posting these, note that they’ve linked to the account from their verified Twitter account a few times)

(Confiscated, but sadly not pictured yet: thirty zillion bottles of shampoo.) 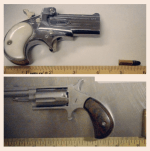