This morning, PandoDaily reported that Los Angeles-based eCommerce startup, BeachMint, had finally tanked after a long, “slow unraveling.” The problem, however, is that this doesn’t exactly mesh with reality.

The reporter, Michael Carney, says that “multiple sources” informed him that the startup’s board had essentially fired CEO Josh Berman and President Diego Berdakin, and, on top of that, had asked them to return their remaining $20 million (of the $73.5 million total) to their investors. Were that the case, it would be a clear indication of BeachMint’s impending demise.

However, TechCrunch has since spoken with Berdakin, Berman, NEA General Partner and BeachMint investor and board member Pete Sonsini and JewelMint Product Lead David Oh, who tell us that the reports of the company’s death have been greatly exaggerated. In a series of emails and conversations, the founders reported that, in fact, Berdakin and Berman remain 100 “percent committed to and focused on BeachMint” and at no time have been asked to step down by the company’s board of directors. Nor were they asked to return any of the money they’d raised.

Sonsini says that the board is “completely behind the founders” and NEA, which is the largest stakeholder in BeachMint, has invested in each of the startup’s three financing rounds because the firm believes in the founders’ vision. Even if actualization of that roadmap takes time.

So, in short: Everyone we’ve talked to at BeachMint says that these reports are completely untrue.

In its report, Pando essentially speculates that BeachMint’s lack of traction and burn rate have forced the company into an overhaul reminiscent of the one that recently took place at fellow Los Angeles startup, Viddy, in which it recapitalized and gave back $18 million in funding to investors and reshuffled its board.

The BeachMint President tells us, however, that the company has been laser-focused on limiting its burn rate, still has “north of the $20 million [in capital] that was reported” left in the bank and has plenty of runway left. If there is any truth to the story, Sonsini says, it’s that the company has been talking to strategic partners about fundraising. Whether that’s smart or not, well, the truth would appear to lie in the middle.

In the big picture, subscription commerce is beginning to enter a period of consolidation similar to the one that the Daily Deal space went through after its gold rush. As the space matures and the big fish (like Walmart) move into the market, some of the “early-mover” startups in the space are going to experience (or are currently experiencing) growing pains. In eCommerce marketplaces (subscription commerce is no different), scale is critical.

So, even with celebrity endorsements and early hype, the road hasn’t been a cakewalk, and BeachMint is no different. The company, which began began with a single brand, JewelMint, before expanding to six, features endorsements from celebrities like Mary-Kate and Ashley Olsen (StyleMint), Jessica Simpson (BeautyMint), Rachel Bilson (ShoeMint) and so on, with each brand offering different collections of products in their particular vertical and operating behind some kind of personalized subscription commerce model.

Berdakin says that BeachMint went in knowing it wanted to experiment with various models and permutations and that, even if each brand didn’t end up a total success, the process would hopefully identify the ideal vertical and model. Going forward, BeachMint likely won’t be able to sustain or dedicate equal resources to all six brands and thus may have to eliminate a couple of these brands in the future. So, it hasn’t just been smooth sailing for the company.

However, while Carney says that the startup’s brands mostly failed to get any significant traction (with the exception of JewelMint and ShoeMint) and that they’ve since been “left to idle,” Berdakin, of course, says that the company is not giving up on its brands and continues to focus on all of its “FashionMints” and within that, he says, to turn more aggressively to a marketplace model, while increasingly on “removing inventory while keeping exclusivity.”

The “quality of BeachMint’s revenues continue to increase as well as revenue itself,” the BeachMint co-founder continued. In turn, while he declined to share specifics, David Oh, who leads acquisition and is the head of product for JewelMint, said that he’s run R.O.I. calculations and found nothing in growth trajectory or the company’s margins that even remotely justifies PandoDaily’s conclusion. “That’s why I’m still here after two-and-a-half years,” Oh says.

The reporter has also written several articles about the departure of senior executives from BeachMint, which he implies act as corroborations of BeachMint’s inevitable tanking, especially as he claims they were a result of “internal strife.”

Multiple members of the BeachMint team (including the co-founders) admitted that the company was guilty of scaling too quickly, too early, hiring faster than they likely should have. So, while they confirmed that reductions were made and people were let go, it was because they weren’t the right fit and because it was forced to tap the breaks. While certainly an indication of fallibility, people within the company disputed Carney’s portrayal of the events, which seem to take liberty with certain facts in order to support a pre-conceived conclusion.

“We are growing 50% year-over-year and continue on path to profitability,” the BeachMint President said and hinted that he and his co-founders were working to draft a response piece that would share further details on the company’s traction, user base, churn and so forth. While founders are reliably biased towards the sunny side when it comes to the success of their business, it doesn’t seem as if this is quite the obituary the initial report made it out to be.

As of yet, it is not clear whether or not the board or the company will pursue legal action. But one thing is clear: Wherever he is, Sean Parker just winced and probably grew a gray hair.

Below you’ll find the official response from BeachMint to PandoDaily, passed along to us by Berdakin, and below THAT, you’ll find the BeachMint President’s short letter to employees that was subsequently posted to Facebook.

“The recent article on PandoDaily suggesting that Diego Berdakin and I have left BeachMint and that the company has been asked to return capital to our investors is not accurate,” said Josh Berman, CEO of BeachMint. “Diego and I remain 100% focused and are fully backed by the BeachMint Board of Directors, and there are no plans to make any changes to our leadership team. Unfortunately, nobody at BeachMint or the Board of Directors was contacted to confirm or provide input on this story.

Josh continued: “We are fortunate that our Board of Directors and our partners are closely aligned and as excited by our company’s ambitions and performance as we are. BeachMint overall has grown 40% year over year, in both sales and subscribers, and we continue to add top talent to our team, including a new General Merchandise Manager for our FashionMints from Kellwood, a Senior Marketing Executive from eHarmony and a VP Finance who joined us from ShoeDazzle.

“I am more confident than ever that BeachMint will exceed all expectations and continue to deliver amazing product to our customers, and strong performance for our investors,” added President Diego Berdakin

“The Board of Directors is incredibly positive about the future of BeachMint and we fully support both Josh and Diego in their efforts to build a phenomenally successful business,” said Peter Sonsini, General Partner, NEA, Beachmint’s largest shareholder and a member of BeachMint’s Board of Directors.

“BeachMint’s business performance, alongside the talented and experienced executive team at the helm, ensures we remain incredibly positive about the future of this company, and the role we know it will play in driving innovation within e-commerce.”

Update: Here is PandoDaily’s response to BeachMint’s refutation of their initial reporting. 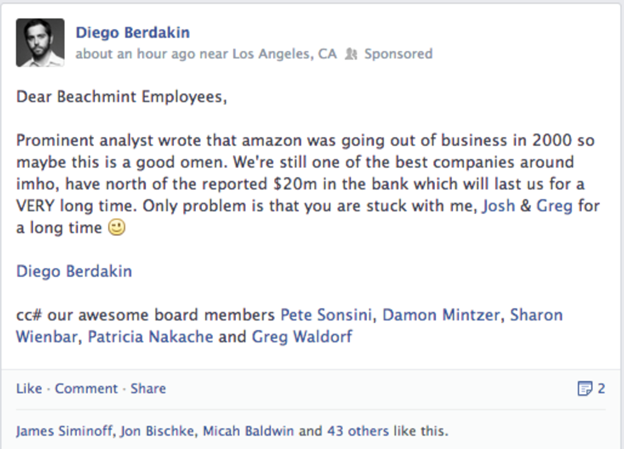