It was only a matter of time before Sony jumped on the phablet bandwagon. And that day is today. The mobile maker has just announced the Xperia Z Ultra: a frankly gigantic addition to its smartphone line-up that packs a 6.4″ full HD display. This phone is so big that one of the accessories Sony is lining up is a slender Bluetooth handset for taking calls — i.e.so you can leave the whopping slab on the table.

Sony is following in the footsteps of Samsung, with its Galaxy Note devices but obviously it didn’t say that. Pierre Perron, president of Sony Mobile Comms for NW Europe, said the mobile industry has  seen “increasing consumer demand for larger screens”, adding: “The big screen segment is one of the fastest growing segments.” 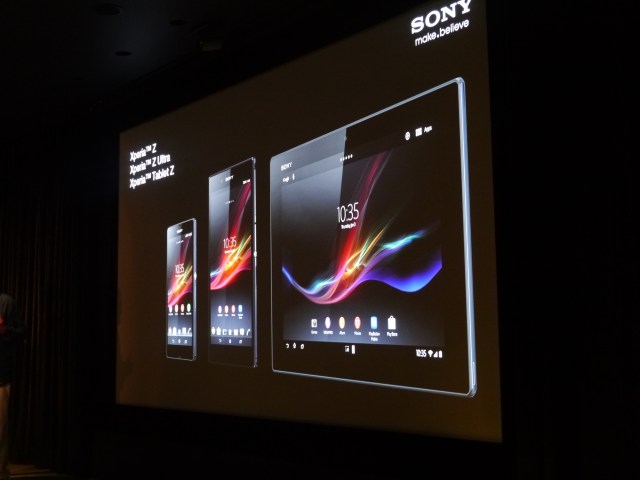 The Xperia Z Ultra is big across the front, but very slender around the waist: at just 6.5mm thin.

Sony’s head of global product design said the designers are approaching the limit of how thin they can make phones.  “You can’t make the phone any thinner because of the connectors — we’re at the point we’re going to have start working on connector technology,” he said.

The overall look of the Z Ultra continues the Xperia Z and Tablet Z design language, with the same blunt-edged, high gloss slab form. It’s also waterproof and dustproof, as the Xperia Z is.

The display is full 1080p HD, and incorporates Sony’s Bravia TV display technology — including its Triluminos tech, which it said supports a greater range of colours, with natural shades, and also its X-Reality technology for improving the viewing experience of low res video.

Under the hood, the Xperia Z Ultra is powered by a Qualcomm Snapdragon 800 2.2GHz quad-core chip. Its rear camera is 8 megapixels.

Sony’s phablet supports stylus interaction — Sony said “any pencil” can be used on the screen, rather than requiring a dedicated gizmo to poke it. Sony has also created a software keyboard designed for the larger phablet form to support one handed-typing.

The phablet is due to launch “later this year”. There’s no word on pricing as yet, or specific market availability. Also today, tacked on at the end of the press event — entirely overshadowed by the attention being lavished on the Xperia Z Ultra — Sony announced a new smart watch, with the unimaginative name of SmartWatch 2.

Sony has been dabbling in ‘smart watches’ for years — literally — and made a point of trash-talking competitors who ‘may or may not be launching a smart watch’.

Sony’s new SmartWatch 2 can run a handful of dedicated Android apps, including Facebook and Twitter, plus a call handling app, email, Gmail, a music handling app, weather, Runtastic, a new aggregator app and a few others. The watch can also be used to remote control apps running on another Sony smartphone, by, for instance, being used to take a photo from the phone remotely without having to tap the phone’s screen.

Hardware wise, it has a 1.6 inch Transflective LCD display, which Sony says is designed for improved visibility in sunlight. The display has apparently been “optimised” over Sony’s prior SmartWatch, now rocking a resolution of 220 x 176 pixels. The watch itself is comprised of aluminium and plastic, and take a standard 24mm watchstrap.

Battery life — which remains the biggest hurdle to smart watch success — is good for three to four days “typical usage”, according to Sony, or five to size days low usage.

There’s no word on pricing as yet. Sony said the SmartWatch 2 will be available worldwide from September.