Waze’s big exit to Google proved one thing: if companies can harness the power of the crowd to deliver real-time, granular data, big tech corporations will be watching them closely as potential acquisition targets. There’s another category ripe for the picking, even if the problem being solved isn’t as apparent or immediately useful as traffic and navigation data: weather. A few apps are trying to harness the crowd to provide accurate, ground-level forecasts and conditions, and they’re catching on with consumers, too.

Montreal-based startup SkyMotion is one such firm, and it recently launched its 4.0 update, which not only harnesses crowdsourced weather reports, but also allows other businesses to plug into that data using a public API, to integrate real-time reporting data from SkyMotion’s users into their own products. That provides an up-to-the-minute forecast, one that probably won’t show you weather conditions completely dissimilar from the ones you’re actually feeling outside at any given moment, as can still be the case with apps that pull weather data only from specific weather monitoring stations. 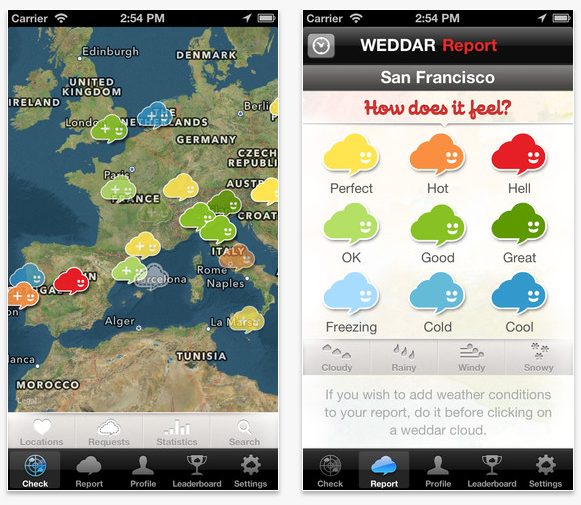 SkyMotion has had considerable success harnessing the crowd to populate its real-time forecasts, with over 200,000 people currently submitting observations according to the company. Over 50 percent of those who download the app actually keep it and use it, and 65 percent of all users are active between 15 and 200 times per month. The company is now close to reaching 500,000 total downloads, and anticipates being well over 1 million by the end of the year should the pace remain near its current rate.

SkyMotion isn’t alone in crowdsourcing weather data. There’s also Weddar, the “people-powered” weather service and mobile app that encourages location-based reporting with a very human element, since it asks people how conditions generally feel on the ground, instead of seeking out specifics. The Weddar team, which is based in Portugal, launched its app back in April 2011, and where once you’d be hard-pressed to find anyone using it outside of its home market, now you’ll probably see results just about anywhere you open it up.

Crowsourced weather data could appeal to big tech companies for the same reason that crowdsourced data does; it greatly improves the quality of consumer-facing products. But it also offers a lot more besides, by providing services that can be combined with other local data including maps and traffic, as well as shopping and advertising information, to give a much more accurate, much more complete snapshot of any given location at any given time. Weather affects everything from the average user’s day planning, to marketing, to budgeting, and companies that are improving the quality of that data will no doubt be on the radar of anyone who makes those things its concern.