Nextdoor, the company that lets people create private social networks accessible only to their local neighbors, has launched its first native mobile app for iOS, Nextdoor for the iPhone.

The launch comes amidst an apparently strong period of growth for the San Francisco-based Nextdoor. In an interview this week, CEO Nirav Tolia said that Nextdoor now has private networks created for 12,600 neighborhoods across all 50 states, which is more than 50 percent up from just three months ago when Nextdoor had some 8,000 neighborhoods created on its system and a significant boost from late March when it crossed the 10,000 neighborhood line.

The launch should also be a welcome debut for Nextdoor’s users, as up until now 30 percent of visits to Nextdoor.com have been coming through mobmile browsers, with 30 percent of new user invitations occurring through a mobile browser as well. “A mobile app was our number one requested feature and has been for past year,” Tolia said. The company is currently working on an Android app that should be released at some point in the next few months.

In our phone interview, Tolia said that the mobile launch could be a “game changer” for Nextdoor’s usage, from being aware of urgent issues such as crime (like Alexia’s jog-discouraging local robbery) and natural disasters to more everyday neighborhood fare like lost pets. “When you have a camera and an instant content delivery device in your hand, all of these things become better,” Tolia said. You can also use the app to easily private message your neighbors.

Nextdoor, which first launched in 2011, has raised $40.2 million in funding from a heavy-hitting list of venture capital firms including Greylock Partners, Benchmark, DAG Ventures, Shasta Ventures, Allen & Company, Pinnacle Ventures, along with new investors Bezos Expeditions and Google Ventures. The company has around 50 staff.

Here are some screenshots of Nextdoor for iPhone (click to enlarge): 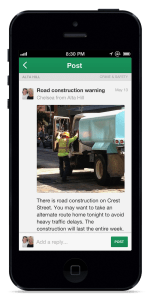