Change.org got its start in 2007 as a social network for non-profits and for project-based giving. For years, growth was slow for the fledgling social action platform, but, over the last year, that changed dramatically. Change.org has grown from six million users in early 2012 to more than 35 million users today, and, as a result, has become one of the largest and fastest growing companies of its kind.

In fact, this growth has led Change.org to take on its first round of outside financing in its six-year history. The company announced this morning that it has taken on a sizable $15 million investment led by the Omidyar Network, the philanthropic investment firm created by eBay founder Pierre Omidyar and his wife, Pam.

The firm, which has also backed platforms like Meetup and micro-lending giant Kiva.org, will be taking a minority (and non-controlling) stake in Change.org, even without the promise of a traditional liquidity event — as the company has expressly stated that it will not sell or IPO.

Other investors in the round, which brings the startup’s total capital to around $20 million thanks to previous angel investments, includes Uprising, a new “mission-aligned” San Francisco-based fund, among others.

Part of what makes Change.org unique (and appealing to investors) is that, unlike many others mission driven companies of its ilk, the startup is decidedly for-profit and is certified as a B corporation. It’s a similar approach to the one taken by sites like Rally.org, though it runs counter to an exciting new wave of non-profit startups, like the much-buzzed about Watsi, for example, wich is Y Combinator’s first not-for-profit incubation.

Change.org Founder and CEO Ben Rattray tells us that both becoming a for-profit company, while simultaneously proclaiming that his company will never go public or seek an acquisition, aren’t decisions that were made lightly. Not, at least in the latter case, to simply to attract attention. Rattray and company are on a mission to prove to startups, investors (and the world) that it’s possible to build a socially-minded, mission-driven business without being a non-profit. A business that can have a real impact, but also make money and afford to hire the same level of talent that the Facebooks and Googles of the world attract regularly.

That’s been a stigma that non-profit and mission-driven organizations have had to wrestle with for some time. While a whole new generation of people have grown up on the social activism of Twitter, Facebook and Reddit and want to make a difference while making money, the perception that it’s impossible to do both remains.

“If we’re going to build real tools that help people create change, we need to generate revenue,” the founder says. “Although many of my friends told me I was crazy not to seek traditional venture capital, that doesn’t mean investment wouldn’t be important – I still knew that if we wanted to be fast, to build an innovation-focused business and create the kind of scale you find in the for-profit world, we would need mission-driven capital to help us get there”

Now that it’s reached 35 million users, Change.org wants to encourage more social enterprise investors and help evangelize for the development of a third, alternative means of creating liquidity. Whether it’s stock buybacks or some form of dividends, mission-driven businesses need a method that allows them to remain independent without seeking a one-time liquidity event.

Granted, the founder continues, these kind of social enterprise businesses are working over the long-term, 15 to 20 year windows, which is beyond the scope of most venture capitalists. “I have no doubt this is going to change, that eventually more investors are going to start backing socially-conscious businesses,” Rattray says, “but that support probably won’t come from existing funds; instead, it may come from sources like large foundations.”

Either way, by focusing on being fast, on hitting scale and generating revenue (the company hit $15 million in revenue in 2012), the founder says that the company has made an effort to offer comparable compensation to the big tech companies, even if it can’t offer the same perks on the equity side. Instead, it uses a different hook: Join us, and you can actually help make a difference in the world.

This hook, whether it appeals to your or not, has seen the company grow to over 170 employees in more than 18 countries over the last year. But, even if Change.org eventually runs aground, Rattray tells us, the key is to show other startups and investors that there’s opportunity to create big, sustainable businesses within this space, which offer social and financial returns.

When asked what pushed Change.org to the tipping point early last year, which has led to those 35 million users (nearly half of which are international), the founder credits simplicity. Rather than trying to be everything to everyone, he said, the company focused exclusively on petitions; in other words, making it easy for users to create and sign digital petitions.

While this may sound too simple, or like it just encourages “lazy clicktivism” instead of true activism (as Liz points out), Rattray says that the key has been embedding its petition tech within social communities.

Twitter and Facebook have emerged in the last five years as remarkably effective advocacy and community organization tools, but they’re not built to harness real, sustained social movements, the founder says. By embedding petitions within social communities and by allowing people to find out what kind of movements or campaigns are happening now, are happening locally and by highlighting the most effective campaigns, Change.org can go beyond just being a simple “online petition site.”

Skeptics may roll their eyes at that statement, but SurveyMonkey, now a billion-dollar company, would probably say the same about surveys. And, for Change.org, when 35 million people have used the site, it doesn’t really matter, does it? 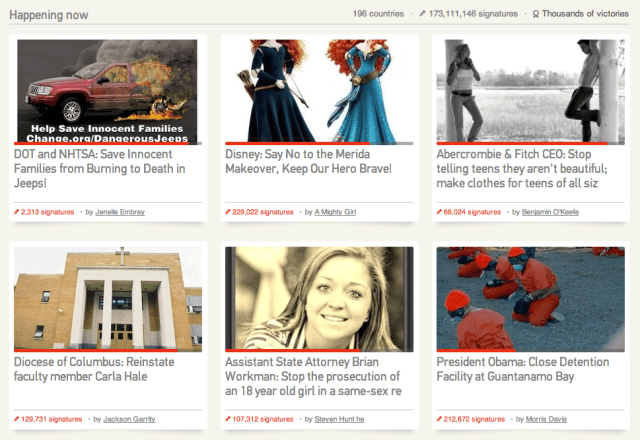