Cameron and Tyler Winklevoss, the twin Harvard graduates who famously sparred with Mark Zuckerberg over the founding of Facebook and are now working as tech investors through Winklevoss Capital, are part of the growing group of venture capitalists who have taken a keen interest in Bitcoins. Last month, it was revealed that they personally own roughly one percent of the currency, a stake worth the equivalent of some $11 million. And now, the Winklevosses tell TechCrunch they have invested in Bitcoin in another meaningful way — by leading a funding round for a startup in the space.

BitInstant, a New York City based startup that operates an online platform for buying and selling Bitcoins, has raised $1.5 million in a seed funding round led by Winklevoss Capital with the participation of other strategic investors including money services veteran David Azar. The investment was closed this past fall, but the Winklevosses are just now publicly announcing it in the lead-up to the Bitcoin Foundation’s 2013 Conference being held in Silicon Valley this weekend.

BitInstant, which has a full-time staff of 16 led by CEO Charlie Shrem, has emerged as a key player in the nascent Bitcoin market: The company already processes approximately 30 percent of the money going into and out of Bitcoin, and last month alone facilitated 30,000 transactions, the Winklevosses said in a phone call this week. The funding is meant to allow the company to further scale up its staff and product as it angles to become the go-to site for Bitcoin transfers. 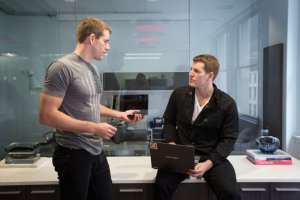 The Winklevosses say they were attracted to invest in BitInstant in large part because of its leadership. CEO Shrem is the vice chairman of the Bitcoin Foundation, and CIO Alex Waters previously worked with the core developers on the original Satoshi Bitcoin client. “Charlie has been in the space for a very long time, and he has an impeccable reputation among Bitcoiners. He knows everyone in the space and everyone in the space knows him,” Cameron Winklevoss said. “One of the most exciting things about people who are into Bitcoin is that they’re a really passionate community, and Charlie is a passionate entrepreneur. He would be in that category of someone who lives, breathes, and sleeps Bitcoin.”

Speaking of that community, the world of Bitcoiners does indeed have an interesting edge to it: There’s an underground vibe that seems like it would contrast with the more traditional East Coast prep style of the Winklevosses. In our phone call, Cameron and Tyler said that they’re intrigued by the current feel of the Bitcoin space — and its potential for becoming a bit more structured in the coming years.

“We’re definitely pretty fascinated by it. The classic issue with Bitcoin is that it’s very early days,” Tyler said. “The entrepreneurs in the space are very impressive, but it takes really two areas of expertise: One is technology, and the second is understanding money services and regulation and all those things that are important for sustainability. Most entrepreneurs and companies we see in the space have the tech down, and they’re super strong there, but in terms of being buttoned up and looking like an average bank, it’s hard to couple both of them together. We think that BitInstant and Charlie do a fantastic job of doing both.”

This marks the third big-name funding news for Bitcoin startups in just a few days. Earlier this week Adam Draper announced that half of the companies in his next Boost.vc accelerator program will be focused on bitcoin, and yesterday Peter Thiel’s Founders Fund led a $2 million investment in Bitcoin processing startup BitPay. It will be interesting to see how the Bitcoin space in general evolves as even more buttoned-up types and traditional money managers get involved.