Another funding raise for a collaborative consumption startup: Spain-based private sales club Privalia, which sells branded clothes and accessories at discounted prices to members in the five markets it currently plays in, has closed a new €25 million round ($32.3 million). The company did not specify which round this latest raise falls under but has previously raised a total of $218 million in two rounds, taking place in 2010 and 2011, according to Crunchbase.

Privalia currently operates in Spain, Italy, Germany, Mexico and Brazil. It said it plans to use the new funding to expand its growth in the Latam region, as well as to strengthen its financial structure and extend its leadership, noting in a press release that sales in Mexico grew by more than three digits in 2012, and that Brazil is its main operating company by sales volume. 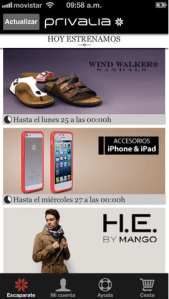 Overall, Privalia said its business grew 32% in 2012, with total revenues of €422 million ($543.5 million), adding that it ended the first quarter of this year with positive EBITDA on a consolidated basis. It points to early investment in mobile as a key engine for growth, with €1 in every €3 spent via its mobile apps in Spain, while in Mexico the figure rises to more than 40% of sales — and up to 60% during holiday dates.

Commenting on the raise in a statement, co-founder Lucas Carné, said: “In the last three years we have invested heavily to consolidate as one of the first groups of e-commerce in Europe and Latin America. The current size of operations this year allows us to focus on operational efficiency and profitability growth. Only those electronic stores that are profitable or have strong support from investors, will able to survive in the next three years.We are fortunate to meet both conditions.”