Using Google Maps today is great for what it’s supposed to do, get you from point A to point B. But there’s a lot of information that Google collects that you never get a chance to glance it, or don’t have a reason to. Google wants to give you more reasons to explore a map, and it’s obvious with the preview of its latest version. This truly is a re-imagination from the ground up, and exactly what the recent leaks tipped off.

I sat down with Jonah Jones, Lead Designer, Google Maps and Bernhard Seefeld, Director of Product Management, Google Maps to discuss the thoughts behind the revamp, one that’s being rolled out in preview mode today — seemingly because it’s such a drastic departure from what’s available now. The main element of navigation is now the map itself, rather than the search box and left-hand information that we’re used to. Once again, it’s taking cues from the mobile versions of Maps, running smooth and fluidly and providing the information that you need within the context of the map itself, rather than take your focus away with search results along the side.

Jones explained me: “What if you could create a billion maps, one for each user. That’s what we’re doing here.” What this means is that Google Maps will now adapt to the things that interest you, including restaurants you’ve been to, ones that you might like and what your friends have done. The brilliant imagery that Google Maps has at its disposal is being pushed to the forefront, running along the bottom of the page. Until now, you had to click buttons to look at some of these images, now it’s all integrated. Google Earth is even making its desktop debut, thanks to WebGL.

Here’s a look at your main navigation screen for Maps on the web: 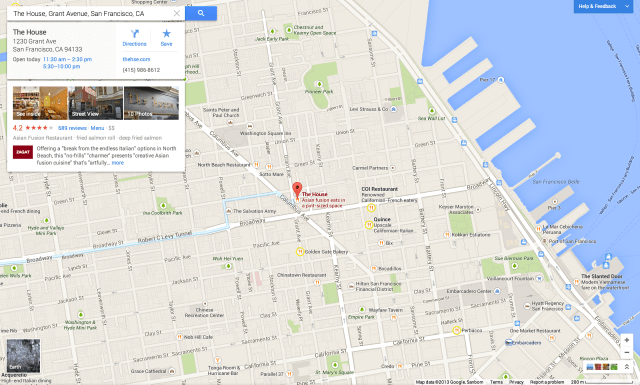 In case you’ve forgotten, this is how Google Maps looks today: 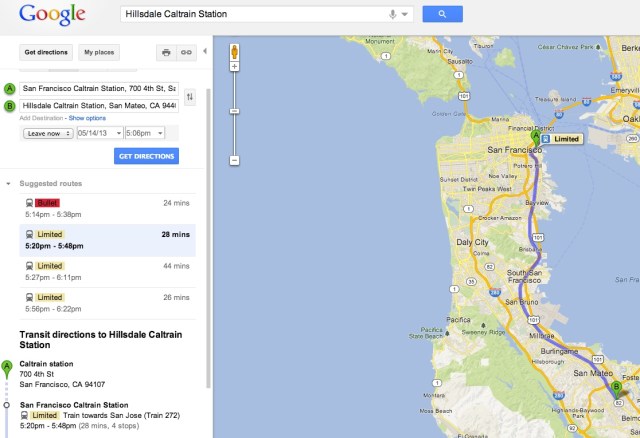 The extra white space and sidebar navigation in all of Google’s products are getting completely wiped out, thankfully.

A new map, over and over

As you click around the map, drilling into specific areas, the screen is redrawn to adapt to your personal interests and tastes. This approach makes all of Google’s previous offerings seem static. When you click on a point of interest, like a restaurant, you’re doing so from the map itself, and a Google Now style card pops up on the left-hand side with user and Zagat ratings, reviews from your friends and quick entry points to photos of the venue from Street View, both inside and outside of the venue: 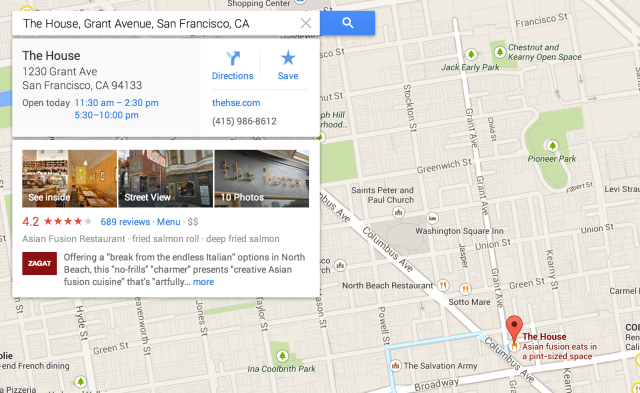 Jones noted subtle changes on the map as you interact with it over time: “The map has gone from being this anonymous blank slate to one that I’ve started coloring in myself, because it has become my map. When you go and rate places, it makes them friendlier, they become more prominent with the new design. Places now show up as personal landmarks. Some icons have a yellow glow, and these are places being recommended, for example.”

Here’s what he’s talking about: 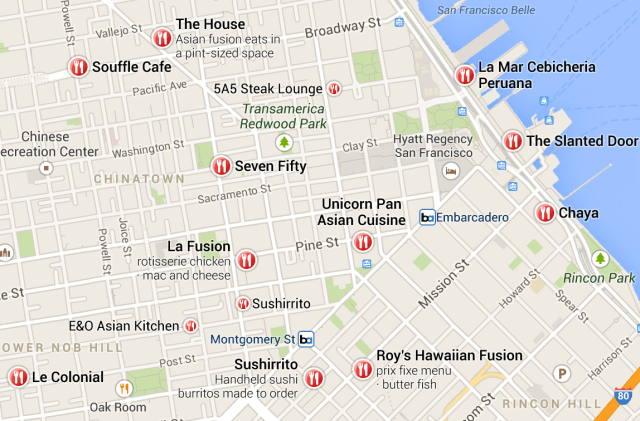 There are now over 100M “Places” on Google Maps, with more being added every second.

“The map gets more useful, the more you use it.” 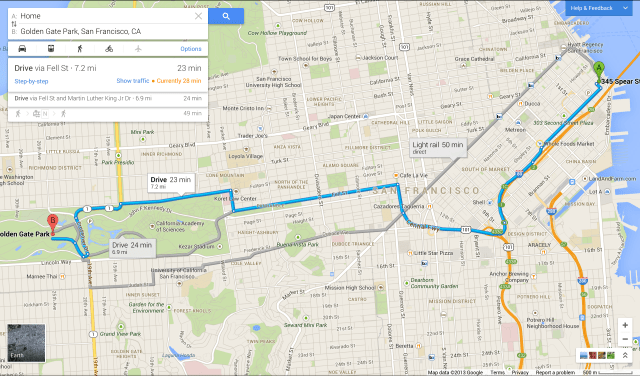 Here’s a neat trick, too: If you want to go from point A to point B and don’t have the exact addresses, you can simply click on the map to plot it out on the fly. This is something that I’ve wanted to do on any decent mapping product for quite a while, since dense cities like San Francisco are easy enough to navigate if you know the general direction in which you want to go.

Speaking of dense cities, public transportation has gotten a new treatment with this redesign, as well. Not only does everything look better, but you’re actually given more information to make decisions in the future. For example, if you’re looking up a Caltrain route, you’ll be able to dig in deeper to see the times throughout the week so that you have an idea of how to plan out your day. The quick information that comes up in the Card is just as handy: 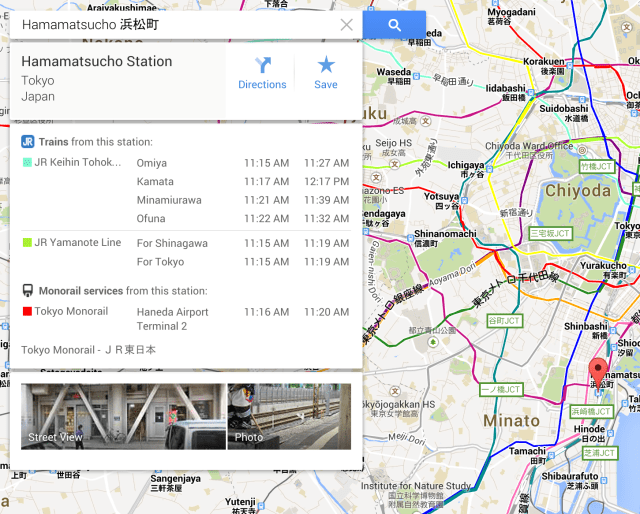 Finally, flights have been integrated into Google Maps. This has probably been one of the requests that I’ve heard the most for the product. It makes complete sense that if you’re sitting on a map and are able to put in two locations, like airports, that you should get flight information back…especially since Google already provides this data within its Search product. Well, it’s here now: 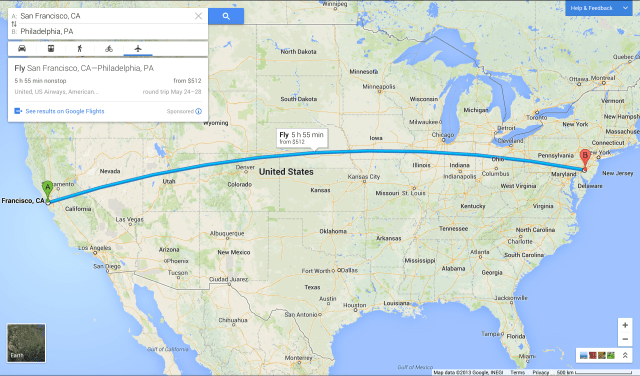 It’s absurd to try and figure out why this hasn’t been available to us until now, especially since Google has been leaving money on the table with the sponsored links and results for buying flights.

The nice, but not necessarily most-used part of Google Maps is its imagery. You can essentially “visit” a place that you’ve never been before with Street View photos, outdoors and indoors. Digging into those photos hasn’t been easy, so you’ll always have the ability to click through to them within the new Maps experience.

Jones and Seefeld walked me through Google Earth’s integration, which now requires no plugin or software download. Still, the features seem to be more than the regular person would use, unless they have a lot of time. It’s clear that Google wants people to see its Maps product as a place to discover new places, plan an adventure and then explore.

The new visual effects to zoom in and out of locations is seamless, and pretty neat. One moment you can be looking at a flat map, the next, a 3D rendering with satellite imagery: 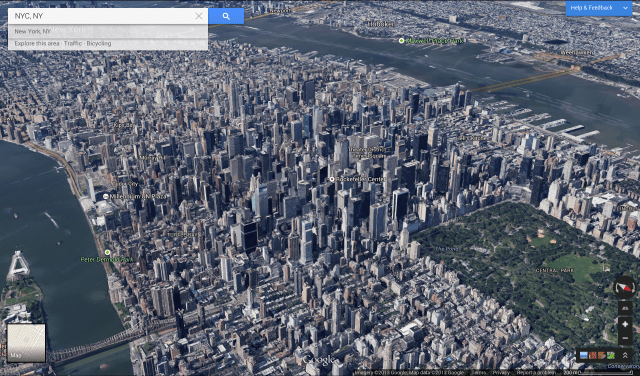 Keep pulling back and then you’re in the solar system. Want details? The renderings of Earth come complete with real-time clouds: 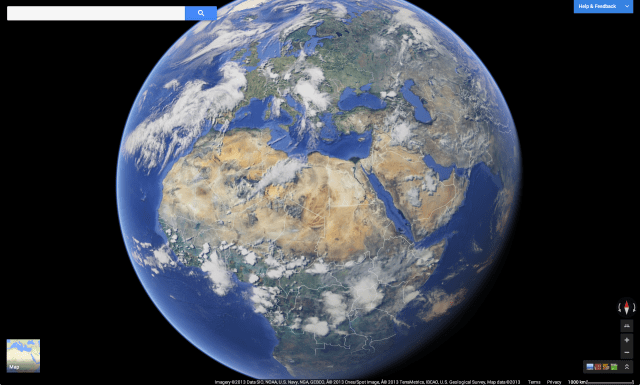 My favorite part has to be the photo tours, which stitches the photos taken by Google, as well as users, and morphs them all together into a “walk-through” tour. This works really well for big tourist destinations, like this example in Rome: If you want to try the new Google Maps experience, you’re going to have to sign up and wait in line here: http://maps.google.com/preview. I’m told that some of the functionality from this will find its way into the iOS and Android versions of the app, but for the most part, this is very similar to what you’ll find on those apps. Not much is missing.

The effects are stunning, with shadow effects, new design elements and social cues to check things out. Will it encourage people to use Google Maps longer, or will they just come to get directions, send them to their phone or print them out and then be on their way? That remains to be seen, but Google has definitely thrown the kitchen sink into the product. Everything that the Maps team has been working on over the past ten years is here.

Luckily, it’s all formatted in a way that doesn’t stop you from performing simple tasks. The imagery sits at the bottom of the screen, but is more readily available than it was today. The team tells me that they’ll be collecting feedback, which should make the eventual transition to the new design a little easier for everyone to take.