This Sunday, there’s a lot you can do in honor of the woman who raised you. There’s TheMomtract, a project out of the ad agency Mother New York to give your mother authority back over some part of your life. There are flowers and promises to let fewer of her calls go to voicemail.

But the San Francisco-based startup Samahope hopes that funds usually reserved for cross-state chocolate delivery might be used to finance medical treatments for women in need around the world. Its #HonorYourMom project is soliciting donations for medical treatments for women along with tweet-length anecdotes about participants’ own parents’ uniqueness. And while funding fistula repair surgery may not have been part of some users’ plans this year, the non-profit organization’s founders hope that providing safe birth kits in a mom’s name won’t take much convincing.

Samahope CEO Leila Janah is the founder of Samsource, a company that offers work opportunities on enterprise data projects to poor individuals around the world. Janah said that while she was on a State Department trip to Sierra Leone for women tech leaders recently, she quickly realized that Samasource was unlikely to work in a country with a 60 percent illiteracy rate. But she was also disturbed upon realizing that a systematic failure to provide basic medical care to many Sierra Leonean women had resulted in people like Dr. Darius Maggi, a Texas-based doctor in his 60s, spending their retirements fundraising for and performing surgeries for women who had undergone traumatic childbirths.

“I thought doctors should focus on providing medical care,” Janah said,”and tech entrepreneurs could be focused on creating tools to raise money for them.” 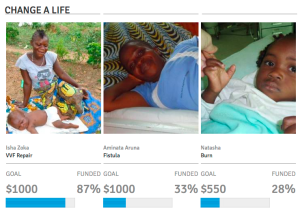 Samahope’s day-to-day work to provide medical treatments for disenfranchised women is being led by co-founder Shivani Garg Patel, a McKinsey and Microsoft alum. It is particularly focused on “last mile” populations in rural areas where care can be difficult, if not impossible, to find. (Maggi’s organization, the West Africa Fistula Foundation, has become one of its first beneficiaries.) Users can help pay for medical treatments in Sierra Leone, Zambia, Nepal, and Mexico. Like microfinance organization Kiva.org, partner organizations that work in those countries help connect funds with individuals in need, and users can similarly connect their Facebook profiles and PayPal accounts. Samahope says it uses charity researcher GiveWell among others to assess prospective partners and researches their budgets and effectiveness.

The World Health Organization estimates that two billion people worldwide have no ability to access basic surgical care. Much of the focus of Samahope-funded operations is on fixable conditions that can be treated with surgeries. Users can help pay for cleft palate and burn surgeries resulting from close proximity to open flames used for cooking.

Angel investors including Laura Arrillaga-Andreessen, founder of the Silicon Valley Social Venture Fund, and Scott Banister, founder of Cisco-acquired IronPort Systems, have helped the organization raise $100K to date. Patel says that 100 patients’ procedures have been funded by 250 users to date with monthly donations growing an average of 60 percent this year. Since #HonorYourMom launched last week, they say that donations on the site have more than doubled.

The team has an ambitious goal of making scary-sounding surgeries philanthropically funded, but they’re not alone. Watsi, the first non-profit that Y Combinator welcomed to one of its famed accelerator program classes, operates in a similar space of funding operations for people in need. The Red Cross continues to be a popular resource for giving in cases of massive disaster-related medical needs (and one many individuals think of first). And the explosive growth of crowdfunding and donation sites, while enabling more options, may have created a sense of donor fatigue amongst people who are asked to give to different contacts’ causes daily.

When asked about the competition for dollars, Janah said that it provides validation that what they’re doing is valuable and viable. “Given the number of people who don’t have access to acute care, there is definitely room for multiple players in this space,” she said. “We should be competing to provide the best service. If you can provide access to health care, you can solve a lot of other problems. Our challenge is to show how powerful this investment in someone is.”

There is an also an employment story underlying the cause: by helping women in need get well, they can get back to work. In the future, the site may try to provide opportunities to fund education on the path to jobs in medical fields. Training women and enabling increased career opportunities creates a “ripple effect of opportunity” amongst their families and communities, according to Half the Sky, a women’s rights organization inspired by the work of The New York Times columnist Nicholas Kristof and Sheryl WuDunn.

Samahope says it will plan to expand geographically based on places where its medical partners can deliver low-cost medical treatments with the highest impact. It has its eye on South Asia and sub-Saharan Africa, where more than two million women are thought to live with untreated obstetric fistula. Screenings for cancer and other detectable conditions are said to be fundable soon as well.