So what does a high Klout score actually get you? The influence-measuring startup already offers prizes through its Klout Perks program, and there are bragging rights (unless your friends think you’re a loser for caring about your Klout score). Now Klout is asking users who are influential on a given topic to answer short, factual questions through the new Klout Experts program.

It sounds like the program won’t be rolled out to every user today, but when it is, you might Klout and be prompted to answer a question like “What is the best way to care for tulips?” or “What is the best place to take your date in the city?” You’ll have 300 characters with which to offer your answer. (Why 300? Co-founder and CEO Joe Fernandez said 140 characters isn’t always enough, but he wanted to keep the answers direct and to the point.)

Fernandez told me that Klout is working closely with Bing on this feature, so if there are relevant answers on Klout, they’ll be featured prominently when people search for a given question on Bing. Fernandez said the search engine team is also suggesting future questions that Klout could ask its users. At the same time, while Klout doesn’t have the same cozy relationship with Google, the answers should show up there, too.

For now, Fernandez said he expects most of the Klout Experts traffic to come from Bing, but you can also browse the content on the Klout site itself. The company will be highlighting recent answers from your friends. Fernandez also suggest the on-site experience will improve over time. For one thing, he said users’ various answers to a single question are currently being sorted on a single page by human editors, but Klout is working on a voting system where people can endorse the answers they like — though you can only vote if you’re influential on that topic. 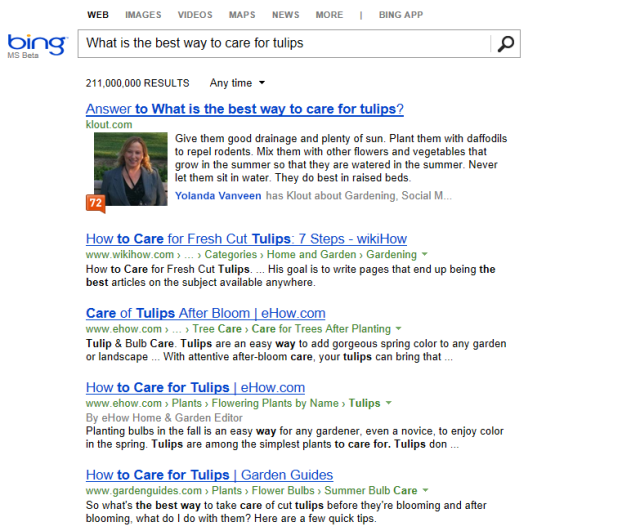 Fernandez suggested that this could eventually integrate with Perks and Klout for Business — for example, businesses could start asking their own questions and offer Perks for good answers.

When he described the new feature to me, I asked if people might think he was basically turning Klout’s user base into a content farm. Fernandez countered that these answers are going to be tied to people’s real identities, and emphasized that they won’t be able to post unless they’ve got a good score.

“What we’re good at is understanding the quality of engagement,” he said, adding that Klout scores are “a really good fitness function” for ensuring that people will create high-quality, useful content.

But why is Klout getting into this business at all? Well, Fernandez argued that Klout has become “the standard” in measuring online influence, so now it can start building other applications and uses on top of that system. Klout Experts is the first example of that.

“Influence and reputation is our platform,” he said.

Nonetheless, he also acknowledged that creating the feature has been a bit of a shift, pushing Klout to hire people who have more experience on the editorial side and with user-generated content: “How do we get people from Yelp versus Google Analytics?”

The Experts program is currently focused on technology, food, music and travel. You can view some sample answers here and here and sign up for early access here.