Buy it in a store, laser-scan it at home, upload it to the web, print it anywhere. 3D printing is poised for the mainstream, but what happens when one person’s finely hand-crafted designs can be pirated and reproduced by anyone? Will 3D-printing-piracy social networks arise? And how will manufacturers lobby to stop them?

The ideas came out of my conversation at TechCrunch Disrupt NY with Alex Winter, director of the new documentary about Napster called “Downloaded”. While The Economist pondered these questions last year, and The Pirate Bay has coined the term “physibles” for 3D-printed objects, Winter takes the next step. He suggests a Napster for 3D printing models is inevitable.

I believe it. The way the music industry was unprepared for the mp3 revolution, the manufacturing industry seems similarly behind the curve. It might even be worse off. At least the record companies had the Digital Millennium Copyright Act to fall back on. As of now, physible designs could be interpreted as falling into a gray area between art and media protected by the DMCA, and what can be patented. 3D printing template marketplaces like 3DLT could also get sideswiped by piracy. 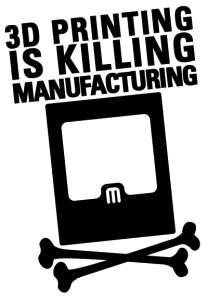 I imagine this situation will lead to the rise of a Napster for 3D printing models along with websites like The Pirate Bay’s physibles section. People will build up curated collections of designs, pass them back and forth, and you’ll be able to print cheap versions of expensive objects from tools to jewelry, furniture to toys, and even guns. The idea of people being able to download an array of weapon designs could be terrifying or liberating depending on your perspective.

Eventually, the old manufacturing industry will wise up, and independent designers will band together to try to thwart physible piracy. They might aim for changes to the laws to make this kind of piracy more clearly illegal with stiff penalties. They might also aim for some sort of digital rights management standard. Imagine if pirated designs could be added to a blacklist and the most popular 3D printers like Makerbots, Printrbots, and Cubes wouldn’t allow you to print them.

However it all plays out, it’s sure to be exciting. It’d be a shame to see piracy erode the livelihood of craftsmen and women the way some believe it does for musicians and game designers. As amateur 3D printing turns from science fiction to destiny to reality, a new set of challenges will emerge for meatspace artists whose work can be boiled down to ones and zeros.