Mobile messaging app Spotbros, backed by ex-Nokia President and CEO Olli Pekka Kallasvuo, has announced the launch of an API to enable companies to build mini apps for its messaging client so that they can use the platform to engage with and provide various services to customers — not dissimilar to Kik’s recently announced “Cards” feature.

The Spanish startup has also shared some interesting numbers with TechCrunch. It says that over 1 million users have registered for its apps since tentatively launching in February 2012 on Android only, before adding iOS and a full launch in October 2012. Around 71% of users are in Spain, with Latin America and the U.S. making up most of the remaining users.

In addition to that 1 million user milestone — up from 40,000 in June 2012 — Spotbros tells TechCrunch that its users are sending around 2 million messages per-day, and have created more than 45,000 “Spots”, which are group chats tied to a specific location.

Though sometimes referred to as the Spanish Whatsapp, Spotbros’ apps go far beyond private or group messaging, though it does support both.

As mentioned, users can create and converse in geolocalized and top-based group chats called “Spots” so that they can share information about the topics they’re interested in with people that are not in their address book. Topics range from things like Gastronomy, football, job opportunities, to humour. 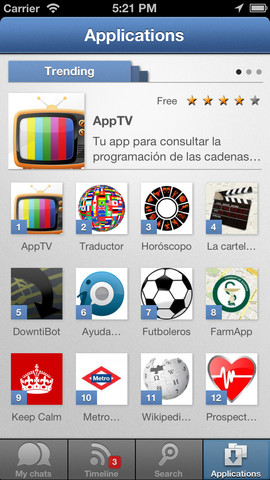 Users can also send a “Shout”, a message that is delivered to the first 100 people closes to you (within 1500m). It’s designed as a real-time way to tap local knowledge, with, I dare say, a heavy dose of serendipitous fun.

The way messages can be constructed is also potentially different. Called “SBMails”, users can create messages that combine unlimited text, links, images, audio, video, and maps. These rich messages can be shared within all of the existing message channels — privately in one-to-one or group chats, Spots, and Shouts — but also on a user’s public timeline, similar to Twitter’s micro-publishing model. In addition, they can be shared more broadly on Facebook, Twitter, Google+ etc. as SBMails have their own Web URL. Messages can also be commented on, forwarded, and Liked.

But Spotbros wants to go even further to enable users to use mobile messaging/IM to not only to talk to their friends or any other Spotbros users but also to use the app to communicate with companies and consume services — “SB Apps” — created by developers. And that’s what today’s announced API is all about.

The idea is that SB Apps will act as “virtual experts” offering users information about specific services through a familiar messaging interface. Examples of existing apps include the “Metro Madrid” app which gives the best route after a user has typed the name of two subway stations; “Billboard” which provides local cinema listings and other details after typing in the name of a film; and “Triviapp” which lets you play a game of trivia with friends or any other Spotbros users.