At the OpenStack Summit last week, Tuesday’s keynote opened with Dope’n’Stack E.N.T.E.R.P.R.I.S.E, a video that symbolizes the arrival of a new force of disruptors who see riches in building software and systems that will displace the legacy systems of old. It’s not a question anymore. OpenStack has the momentum to win, and it can thank this young group of developers and feisty systems gurus for making it happen. 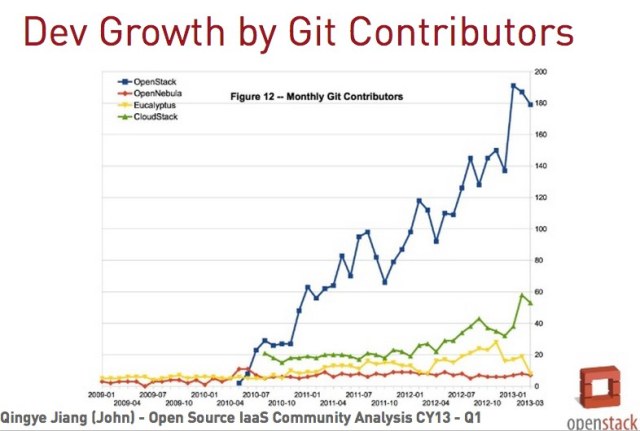 Companies that have long controlled the enterprise software and systems market are now at a distinct disadvantage. Their proprietary, closed-stack integrations don’t play in the new open cloud world that emulates the success of Internet-scale companies, such as Amazon Web Services, Google and Facebook. And this group of technologists knows it, making it abundantly clear last week in Portland.

Cloudscaling CTO Randy Bias summed up OpenStack’s place in the market in a presentation this week, titled “The State of the Stack.” The presentation reviews the findings of a survey done with OpenStack users and relevant data about the overall community.

State of the Stack April 2013 from Randy Bias

OpenStack is as much a stack as is Linux or Java. That points to a future where it has a chance to become a standard for building out cloud infrastructure. It has the attention of startups and large enterprise companies. Successes have come with customers such as Bloomberg, Comcast, Best Buy, CERN Laboratories and the NSA, all which have built core technology on OpenStack. It has served as a stack to try new technologies, such as the Ceph storage system and any number of new networking technologies.

What hypervisor OpenStack users deploy is one of the most telling signs of the shift and the adaptive role that older, more established companies have had to take on. According to an OpenStack survey, KVM has become the hypervisor of choice due to its open-management platform. It has no licensing fees and allows for free choice in how it is used. KVM is backed by Red Hat. Xen, it should be noted, became part of the Linux Foundation last week with the support of Amazon Web Services, which will have definite impacts on the market. Until this point, Citrix maintained a community edition of Xen, similar to the way Red Hat treats KVM. Other supporters include hardware and silicon vendors such as AMD, Calxeda, Cisco, Intel and Samsung. Companies that use Xen in software products such as Bromium and Citrix. And large scale users of Xen, such as Amazon, CA, Google and Verizon Terremark. AWS uses the Xen hypervisor. 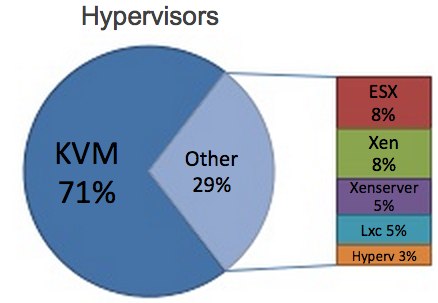 This puts particular pressure on VMware, which now faces both KVM and Xen. In an email, Bias said VMware must open its core ESX hypervisor in order to remain relevant in today’s market:

Bottom line on VMware is that if they don’t open up their management of ESX to non-VMware players and OpenStack generally, they won’t be able to transition to true elastic cloud, will be stuck with only their existing workloads. They will become another Novell.

A VMware spokesperson would not comment when asked if the company would open ESX. Still, VMware can by no means be counted out, said Rishidot Research Founder Krishnan Subramanian.

VMware’s position is a bit rocky. In fact, every big enterprise who is using OpenStack on production environments said they moved from VMware and they went with OpenStack because they feel that whatever VMware offers on the cloud is not good enough for them. I still wouldn’t write off VMware. They understand that they are in a precarious position. They are preparing for such a future by going up the stack and getting ready for more heterogenous environments underneath. DynamicOps acquisition will play a role there.

That focus on heterogeneous stacks is exactly what VMware espouses. And they are supporting the customers who are moving to OpenStack environments. VMware is also one of the top 10 contributors to OpenStack.

Martin Cassado was a co-founder at Nicira, which sold to VMware last year for $1.26 billion. He wrote a blog post last week summing up VMware’s participation in OpenStack:

The rationale for VMware’s involvement in OpenStack is simple. The transformation to the software-defined data center will take many forms, and VMware understands that many customers will want to piece together different technologies based on their requirements using open frameworks. Nicira was quite successful with this model, and VMware is committed to supporting that trajectory not just with networking, but with compute and management as well.

Such A Thing As Too Brash?

I wonder, though, if the OpenStack community is sometimes too brash. They are no doubt brilliant technologists, but there is a point in the Dope’n’Stack video where the duo crosses the line from fun entertainment to questionably offensive.

OpenStack organizers showed an edited version of the video to the attendees gathered for the keynote. Organizers said they wanted to provide the audience a “G” rated version.

The reference to “doing more pilots than promiscuous flight attendants” caught the notice of at least one person at the conference.

@dopenstack – pilots line was too much – do better next time. You forgot there are women in IT? Adria Richards didn’t teach you anything?

The Dope’n’Stack team said they were not gender-specific in their remarks. It still did not go over well.

@dopenstack Heh, OK, I’ll revise my comment. Making a word play about “doing” anyone or anything is always and in every case in poor taste.

Dope’n’Stack E.N.T.E.R.P.R.I.S.E is a view into the OpenStack community. It’s fun, energetic and shows the ambition of this young organization. In just three years the community-driven effort has become one of the most powerful movements in IT. It stands to serve as the foundation for how organizations build out elastic stacks.

But there are still questions about maturity both in terms of its attitude and how it evolves as an organization. Says Subramanian: The future of cloud infrastructure platform market is OpenStack’s to lose. If they do it right, they could become the dominant platform but it is a very big “if.”