Schmap already helped advertisers and other companies understand their Twitter followers through its Know Your Followers product, but today it launched a new, upgraded service called Demographics Pro — CEO Paul Hallett described the concept as “Nielsen for Twitter.”

Nielsen does its own social media analysis, and it announced a partnership with Twitter last fall, but that was focused on measuring the social media impact of TV shows. Demographics Pro is much broader than that, giving customers a detailed demographic breakdown of the people following a given account or commenting on a given hashtag.

The best way to understand the data that Schmap is offering is to look at a few sample profiles. Hallett showed me the data for my own Twitter followers — apparently there are 12,032 real people following me, 62.7 percent of them are male, and their average income is $80,300 per year. They like to eat at In N Out, shop at Trader Joe’s, and are “dressed by” Nordstrom’s. The report says:

Professionally, @anthonyha’s followers are employed as sales/marketing managers, senior managers, programmers, web developers and investors. The account has a particularly high concentration of entrepreneurs (within the top 10% of all Twitter accounts in this respect).

This goes on for 27 pages, covering things like ethnicity, location, and interests. This is all algorithmically generated, Hallett told me, and it’s based less on what people say explicitly on Twitter (though that’s a component) and more on using “massive amounts of subtle correlations” that suggest implicit details about users’ demographics, interests and habits. For example, Hallett noted that if someone checks in frequently at Whole Foods, that tells you that they like to shop at Whole Foods, but it also suggests certain things about their income level and age — nothing definitive on its own, but something that can be combined with other indicators. 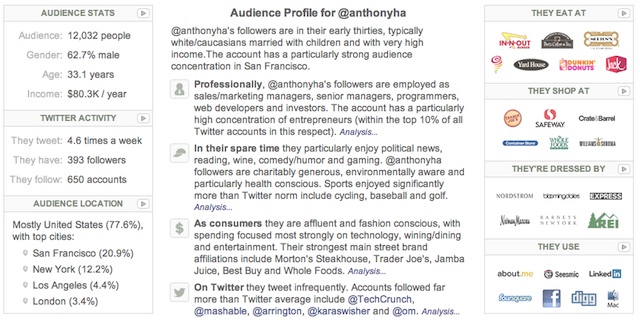 You’re unlikely to be as fascinated by my Twitter following as I am, but Schmap is releasing a few profiles to the public to give people a taste of what it can do. Here’s a profile of users who tweet about Sheryl Sandberg’s new book using the #LeanIn hashtag. And here’s one for people tweeting about #MarriageEquality.

You don’t have to look at profiles in isolation, either. You can build charts of comparing different groups, like those tweeting about the iPhone 5 versus the Galaxy S4 versus the BlackBerry Z10.

Apparently Schmap has been already made this data available to partners through its API. For example, it powers DataSift‘s demographics data. It seems more intuitive build the standalone product before releasing an API, but Hallett said the team originally thought that its main business would be offering this data as a customizable, white label service via the API. Eventually he realized there might be a broader audience, and also an opportunity to deliver insight and context (such as the description I quoted above), rather than pure numbers.

“What we realized was … a lot of what we see in Demographics Pro is based on not just the data but our deep understanding of what makes that data special,” he said.

Hallett also emphasized that Demographics Pro doesn’t allow any direct targeting of audience groups. In other words, an advertiser couldn’t just say that they wanted to run a campaign that reached a certain age and income group. Instead, they might look at a certain topic and, based on the demographic data, decide whether they wanted to run advertisements against that topic.

Given its interest in audience analysis (signaled, among other things, by its recent purchase of social analytics startup Bluefin Labs), I wondered if this is something Twitter could build itself.

“The short answer is, ‘Yes they could,'” Hallett said — but he added that Schmap’s technology was developed by a team of “hardcore mathematicians” for over two years. “It’s not the type of thing that they could just say, ‘We like that idea, let’s do it.'”