Although he studied aerospace engineering at MIT, Misha Leybovich has always been fascinated by storytelling, he told me over coffee last week. So, after stints as a post-graduate researcher at both MIT and Cambridge and after working as a consultant at McKinsey & Company (while testing his own storytelling chops as a part-time clown), Leybovich decided to combine his love for technology and storytelling to help people communicate their digital own narratives, be they biographical, historical — or anything in between.

Leybovich and long-time friend Francis Escuadro founded Meograph last year with the goal of creating an “Adobe for everybody” — to let anybody create four-dimensional digital stories without having to know how to use more advanced content creation tools, like Final Cut Pro, Photoshop and so on. Using Meograph, in under 10 minutes, he says, anyone can log in and create a story through a simple input-type interface, adding YouTube videos, photos, time stamps, maps, annotations and narration.

The result is a kind of Pro Tools/Final Cut for Dummies, in which users can create interactive, rich media narratives that include pop-up-style annotations, a la SoundCloud. This, Leybovich says, gives the resulting “Meographs” that 4D feel. Importantly, he continues, what has long been missing from digital storytelling is context, so, by adding videos mixed with maps and links within timelines, Meograph aims to let people give context to the stories they want to tell, whatever they may be. 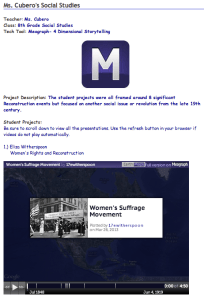 When Meograph started out, the founders didn’t necessarily intend for their startup to become another EdTech company. But the “flipped classroom” model has been gaining steam over the past year, as teachers look for effective tech tools that will help them retain their control over the classroom, while enabling them to better engage (and educate) students.

Over time, the founders watched as teachers began to use Meograph to help students learn about topics, assigning the tool as part of homework to help them create their own stories around subjects they learn about in class. [Here’s a great example.] In turn, teachers are looking for digital tools that will allow them to better utilize project-based learning, while allowing students to take the reins in their own learning process.

As Meograph began to be used more frequently as a learning tool, Meograph has shifted focus to the point where it now almost exclusively targets teachers. Today, Leybovich says that there are over 26,000 content-creating Meographers, more than 36,000 stories have been told and the product has been used in more than 1,300 schools. As a result, its users base is growing by 30 percent every month, is seeing 50 percent growth in monthly active users and over 40 percent of its users have created multiple stories — with 45 percent of its traffic emanating from abroad.

The founders say that teachers are adopting Meograph because it helps them teach their young students communication skills through storytelling, and demonstrate mastery of content while building their digital media skills. The team has also been working to align Meograph with project-based learning and Common Core standards and has been developing a standard “rubric” to help teachers measure student performance.

While teachers should be able to determine the factual accuracy of their students’ presentation, the Meograph Rubric is designed to help them understand how proficient students were at, say, adding and introduction, thesis, context, supporting arguments, and the quality of audio, images, video and so on. The team is also busy working on better ways for teachers to connect student projects to their lesson plans (while fulfilling CommonCore requirements), alongside generating a rubric for more comprehensive grading. 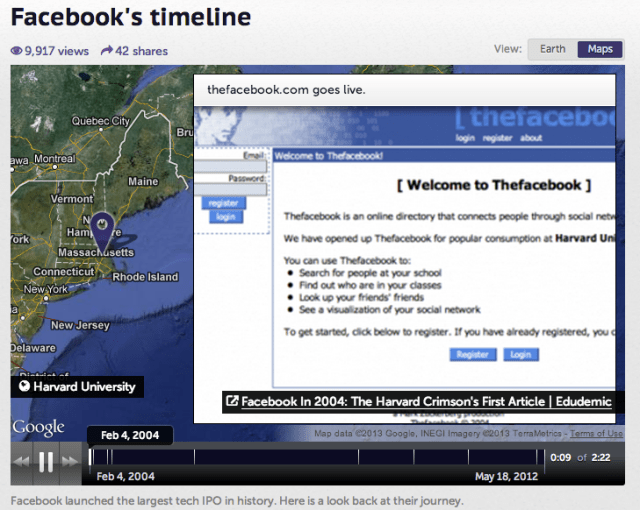 To push the service along and to begin generating some revenue from its growing teacher base, Meograph is launching a paid educational license, which includes teacher-focused extras, like student subaccounts, privacy controls and group pages. The plan will be priced by classroom, the founder tell us, with Lite, Plus, and Pro plans at $19.99, $29.99, and $39.99, respectively.

The idea was to tailor pricing in such a way so that teachers can make the purchasing decisions themselves in order to make the process self-service as the startup gets rolling on other features. Next, the team wants to create ways for a school or district to buy licenses for unlimited use on a per-student basis. Meograph can handle case-by-case bulk license purchasing now, Leybovich says, and they plan to make it easier for entire schools and districts to purchase self-service-style soon. [More details here.]

Meanwhile, the core tool will remain free — for both schools and users outside of education. Leybovich tells us that Meograph is also being used by news organizations like ABC, NPR, Univision and others, as well as tourism companies, non-profits and sports fans to help tell their stories. So while the company will focus primarily on educational applications for Meograph going forward, the core vision remains the same: Building a suite of easy-to-use content creation tools, beginning with a service that makes it simple to combine video, audio, pictures, text and so on into contextualized, interactive stories.

Since launching last year, Meograph has been boostrapped, but the founders are currently raising a round of seed funding to help them hire engineers and build out additional premium features for teachers. There’s definitely still a lot of work left to be done for Meograph, and some additional design and engineering assistance will go a long way. The more the startup can reduce the time it takes to create one of these interactive, mult-dimensional stories, and the more tools it can make available as part of the content building process, the better.

Simplifying the creation process and bringing a breath of fresh air back to how students create interactive presentations has big potential both in the classroom, and outside.