AlumniFunder launched in beta this week with a simple mission: Help create a deeper relationship between current students and alumni, while supporting collegiate entrepreneurship and creativity. To do that, AlumniFunder wants to give alumni a platform by which they can invest in innovative projects created by students at their alma mater. Whether it be for a new science lab, natural language processing research or a documentary film, the startup also wants to help give students access to the capital they need to get their ideas off the ground.

Riding the crowdfunding wave, the startup is essentially putting a spin on (or splitting the difference between) Kickstarter and education-focused, P2P funding platforms like SoFi and CommonBond. Not unlike these platforms, AlumniFunder has no affiliation with a specific college, instead providing a marketplace for those with ideas that need funding to connect with those looking to open their wallets to a worthy cause.

In other words, the platform works like this: Those registering for AlumniFunder are split into “Doers” (those looking to create a project) and “Alumni” (those looking to browse and fund projects). Doers are required to register with a “.edu” email address to set them up as part of a particular collegiate and alumni network, and then, like Kickstarter, their projects are posted to that network for a specified duration — usually between 30 and 60 days.

If the team or student hits their funding target, the money is then transferred via Stripe to the team; if not, no credit cards are charged. AlumniFunder provides a layer of oversight during the process to make sure the projects meet a minimum level of decency and appropriateness, while providing students with tools from Prezi and Vimeo, for example, to help them build and share their presentations with alumni.

The core value behind AlumniFunder, co-founder S. Ryan Meyer tells us, is to create a more direct and transparent channel for alumni to connect with students, in turn supporting alumni engagement in on-campus programs and entrepreneurial initiatives. Rather than crowdfunding being the focus of the platform, Meyer sees it as a technological tool for pooling resources — not a panacea for every capital-raising scenario and every hobby project out there.

Meyer started AlumniFunder last July as an “elaborate work-around,” he says after experiencing problems raising money for “the technology spinoff” of his brick-and-mortar, children’s brain-training company, Minds-in-Motion. Looking into crowdfunding as an alternative and, after considering using Crowdtilt’s white-label product, Meyer and team decided to create their own solution.

Meyer has raised $125,000 thus far, mostly from friends in his alumni network, he says, “crowdfunding it the old-fashioned way” through phone calls and in-person meetings. Crazy, I know. The team has since grown to five, including CTO and co-founder Brandon Goldman, who was the 13th employee at Box and is building the site in Node.js.

As for pricing, at launch, the site is free to all users, save for the requisite credit card processing fees. Going forward, AlumniFunder plans to launch an equity investing platform (set to launch at some point this summer), which will also be free-to-use. The team is currently raising a fund (at an undisclosed amount) that it will likely use to co-invest one-third with the accredited investor crowd in equity-based campaigns, “using crowd-vetting as a way to deploy capital to early-stage investments,” Meyer says.

Although much of the crowdfunding regulation is still in limbo, Meyer says that the team has been working to build its equity model in such a way as to both be efficient while operating within the present regulatory environment. “Hence the summer launch,” he concludes.

For its beta launch, AlumniFunder started by holding contests at Georgetown and Princeton for the most disruptive crowdfunding campaign, with Greylock COO Tom Frangione and Elevation Partners MD Adam Hopkins judging for Princeton and Ellie Wheeler from Greycroft judging for Georgetown. So far, the co-founder says, 22 campaigns are live, which are collectively seeking over $400,000 in capital. The first two contests ran for three weeks and offered $1,000 cash prizes to the best campaign submitted by March 20th.

“I was thrilled to see that entrepreneurship is thriving at Princeton,” Frangione observed after the contest. “The caliber of projects entered into AlumniFunder’s contest is pretty revealing about the ambitions of students and other alumni to innovate while also bettering the world.”

Rather than working directly with either university, AlumniFunder approached a variety of both undergraduate and graduate “entrepreneurship clubs” to get the word out. Today, the startup announced the winners, and you can find Georgetown’s winner, HoyaChallenge, here and Princeton’s winner, Orchive, here.

Next up, AlumniFunder will look to continue pushing its contests onto more campuses to help spread the word, beginning on April 9th at U.C. Berkeley, Stanford on April 18th and USC at the end of April, with more schools to be added in the near future.

“We aim to be a marketplace for ideas, using crowdfunding as a tool to change the dynamics of university education and alumni relationships, creating untold opportunities for experiential learning,” Meyer tells us. “And we want to fund some kick-ass startups, too.” 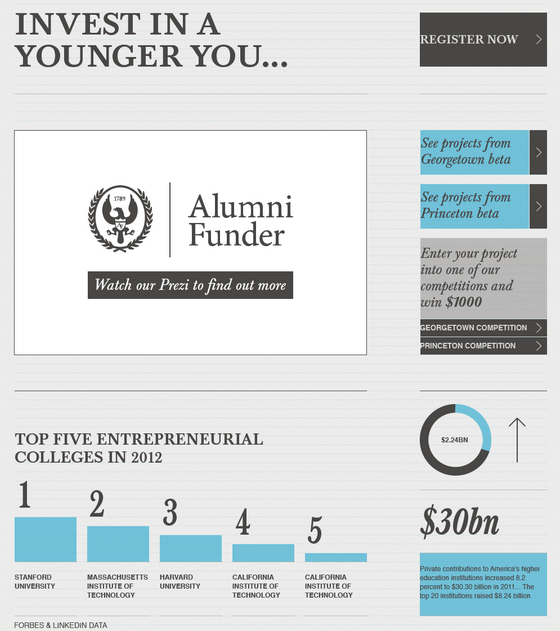