Former Google China head, Kaifu Lee, has been tracking how many times his Weibo posts on Tencent and Sina have been censored and deleted, and has helpfully made a graph of the past 8 months.

The outspoken investor has had his tweets deleted most often in the recent weeks because he was discussing the story on the 13,000 dead pigs found in a Shanghai river, as well as a session in the Chinese parliament to appoint its new leadership. The government often gets the country’s two large microblogging services run by Tencent and Sina to wipe out posts that trigger its censorship keywords. 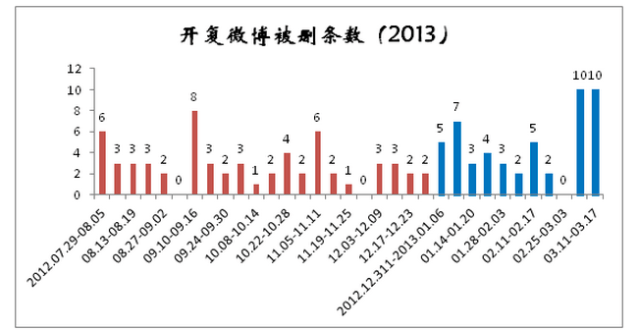 My weibo deletions (click link).Lowest week was my “3-day silence”, and the highest weeks were the recent 2 weeks twitter.com/kaifulee/statu…

Kaifu Lee was kicked off Sina and Tencent’s Weibo sites for three days last month for criticizing state-run search engine, Jike. He has about a million Twitter followers—tiny compared with his 30 million Sina Weibo and 24 million Tencent Weibo fans.