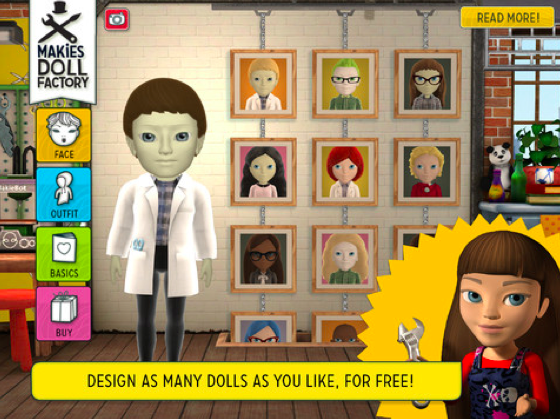 Growing up, I pretty much had the standard dolls and toys everyone did — Trolls, Barbies and Teenage Mutant Ninja Turtles action figures.

But with the advent of 3D printing, kids today have access to something truly special: their very own custom-made toys.

A U.K.-based startup called MakieLab is making a bet that the rise of smartphones and tablets coupled with the decline of traditional retailers is making the iPad the right place to sell the toys of the future. And custom 3D printing will let kids have products that no one else does — toys they design themselves.

The startup launched a Makies Doll Factory app last week that lets you design your own unique doll with special hair, facial features and custom clothing. You can then have it 3D printed and sent to you at a price that starts around 59 pounds ($88), excluding shipping. The app has seen about 70,000 dolls designed so far in the first week. (These are dolls designed, not ordered. MakieLab isn’t sharing stats on orders yet.)

“People love the fact that these toys are on demand,” said co-founder Alice Taylor. “Because the child or adult has made the toy themselves, they’ve got a precious relationship with it. The doll has a heirloom aspect to it.”

MakieLab has been running a web-based version of the store for about a year, but this is the first time they’ve transitioned to mobile platforms. Ultimately, they hope their business will offer a mix of real-world and virtual goods. You can design dolls to buy in real-life or eventually there will be options to dress them up with virtual accessories. Like the rest of the gaming world, Taylor says there is a “power curve” dynamic with a small minority of customers being very aggressive with purchases. One had even bought everything in the store twice, she said.

The startup, which raised $1.4 million last year from seed investors, has been working hard to bring down the costs of manufacturing the dolls. At the beginning, it was about 99 pounds ($148). Now the most basic doll (sans hair) will be about 59 pounds, and then probably 20 pounds more if you want a simple outfit and a hairstyle.

“This is a journey we’re on,” Taylor said. “The material costs are quite high with the type of plastic we have.” MakieLab has printers in the U.K. and Amsterdam and ship globally. Right now, about 10 percent of sales are coming from the U.S., and the majority of people who order a physical doll also buy accessories.

“Eventually, we’ll expand it to be like a distributed manufacturing network, rather than having a centralized factory model,” she said. Finding printers has been a “trial-by-fire” effort, she said. “But we’re getting a ton of support. The suppliers and manufacturers want to see this happen.”

The company isn’t profitable yet and margins on each doll are about 20 percent, compared to the 50 percent level you’d see with standard toys and dolls. But Taylor thinks that a Moore’s Law-type effect is starting to kick in for 3D printing. Costs are coming down fast enough, that the MakieLab model will work over the long-run, she says.

The company also has other products in the works that will be more targeted toward boys or other demographics. That could help them reach the scale they need to raise margins.

“What you see now is 20 percent of our vision,” she said. “We want so much to happen faster, and it will happen over time.” 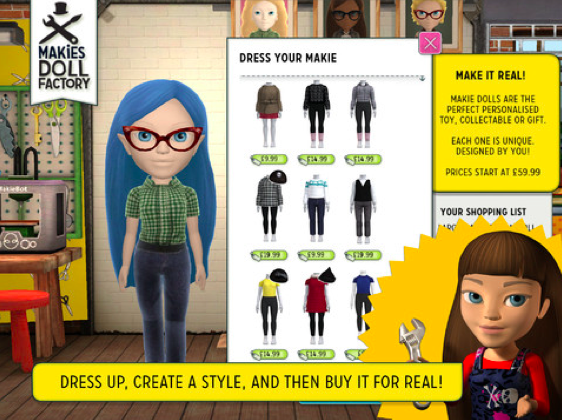