Despite years of chewing the digital cud — not to mention a global financial downturn — there’s no sign of the U.S. or European ecommerce cash-cows ailing, according to two new forecasts from Forrester. In the U.S. Forrester is projecting online retail sales will reach $370 billion by 2017, up from $231 billion in 2013 — a 10% compound annual growth rate (CAGR) over the next five years.

The ecommerce growth rate in Europe is expected to be fractionally higher over the same period, although the overall market is obviously smaller. Europe’s online retail sales are projected to hit €191 billion ($247.1 billion) by 2017, according to Forrester, up from €128 billion ($165.6 billion) in 2013 — a 10.5% CAGR.

In the U.S. Forrester notes that online retail will continue to outpace the growth of physical retail stores — something the category has done since its inception, so no change there. The analyst notes two “notable changes” have helped prop up ecommerce growth in recent years: firstly the rise of smartphones and tablets, which is says are boosting the amount of time consumers spend online and generating more buying opportunities.

Consumers are more likely to use their phones not only to research purchases — both to learn about products and store options — but also to find the best price for a given item. But it’s not just phones that drive retail web traffic; virtually all retailers report that traffic to their sites from tablets spikes during evening prime-time hours, when consumers are in a leisure state of mind. This also suggests incremental web sessions and conversions, because web retail traditionally spikes not in the evening, but during business hours.

And secondly, Forrester notes that traditional retailers have invested heavily in their web divisions — including by offering hybrid online/offline capabilities such as in-store pickup for online purchases — which it says is also helping to grow ecommerce.

U.S. ecommerce growth is not coming from newbies, according to Forrester, which said it expects only four million people to shop online for the first time in 2013. But rather growth is down to existing web shoppers spending more of their time and money online — and spending it on a variety of goods. Forrester notes that online loyalty programmes such as Amazon Prime and ShopRunner are “one driver”, but the wider driver here is web shoppers getting more accused to spending their cash digitally, and therefore becoming more comfortable buying “high-touch, high-consideration goods like furniture or appliances online”.

The report also notes that ecommerce is also helping to boost the U.S. jobs market — with Forrester and Shop.org estimating that more than 400,000 individuals are currently employed by ecommerce companies in the U.S., projected to reach 500,000+ by 2017. And of course more people in employment means more disposable income that can be spent buying goods online (so arguably that could be another factor fuelling online retail).

In its European forecast, Forrester includes a breakdown by country of online retail spend — noting there is considerable variation in the landscape across key markets in Europe. Despite this, it’s projecting CAGRs from 2012 to 2017 of between 9% at the low end, for the Netherlands, jumping up to 18% and 16% for Spain and Italy respectively, the fastest growing European markets over the forecast period: 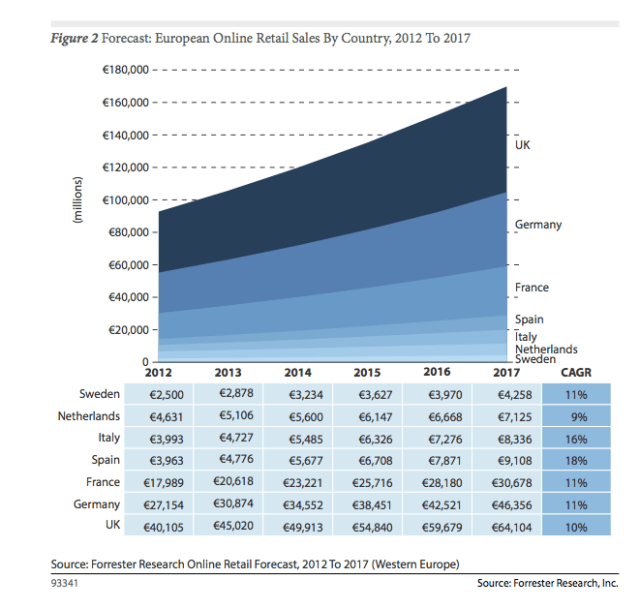 The ecommerce growth disparity between European countries is generally down to a divide between more mature markets in Northern Europe, where Forrester says online shopping is “the norm”, vs markets in the south where ecommerce has yet to become a mainstream activity — but is projected to grow to become one by 2017.

In more mature Northern European markets, such as the U.K. and Sweden, Forrester forecasts that ecommerce growth will continue to outstrip physical retail growth but will slow, as the markets enter what it calls a “new phase of competitive expansion”. In this phase online retailers will need to optimise and innovate, by creating more personalised shopping experiences across “new touchpoints”, in order to stay ahead of the competition.

Mobile presents an opportunity to reach out to shoppers in new ways, influencing the decision to buy at a critical moment. eBusiness execs must support their online strategies with a mobile strategy that considers mobile as more than just another transactional touchpoint. Instead, they must use features like barcode scanning and augmented reality to capture and analyze offline activity in order to more accurately personalize future online interactions and drive web sales.

European markets currently display considerable variation when it comes to “multiple touchpoints” for online shopping, according to the report — with increasingly sophisticated and complex behaviours in some but not all Northern markets. For example, Forrester notes that Germany has “notably lower” mobile shopping adoption than elsewhere in Europe, and few “multichannel customer offers”.