Editor’s note: Steve Patterson is a writer who has covered Boston and San Francisco Bay Area startups for 20 years. Follow him on Twitter @stevep2007.

Braintree, Square and fellow disruptors are applying web and mobile technologies to overhaul the economic model of the payment industry. In the next chapter of the Internet’s disintermediation of large markets, payments are shifting to be efficient and pervasive over-the-top (OTP) mobile services.

Understandably these companies are attracting a lot of money from top-tier VCs, as well as a lot of media attention. Visa has invested in Square and American Express has invested in Square competitor Izettle presumably to buy a ring-side seat to look through the “door to disruptive innovation at the bottom of the market,” which Clay Christensen describes in “The Innovator’s Dilemma.”

These startups enable online and brick-and-mortar merchants to use credit- and debit-card payments in ways that, until now, were impossible. And they have enabled small offline merchants and mobile and web commerce companies, such as Airbnb, Hotel Tonight and Uber, to accept credit and debit cards at a proportional investment level to the business’ size. In addition to Braintree and Square, Card Spring, LevelUp and Stripe – all backed by top-tier investors, such as Peter Thiel, Accel, Andreessen Horowitz, Greylock and NEA – are making this happen.

VCs are attracted to investing in new opportunities for payment innovation that serve new mobile business models and improve consumer experience or enable the merchant to transact business more efficiently. Plastic debit and credit cards are not broken. No group of dissatisfied consumers is lobbying to replace cards with mobile phones, so transactional innovations such as mobile wallets do not really create disruption. Big mobile-enabled shifts in card holders’ buying behavior or merchant selling methods, combined with transactional innovation, create the opportunities to build valuable ventures. A lucky one or two of these ventures that precipitate rapid growth driven by a network effect like Twitter and Facebook could become the next PayPal.

The payment networks and their partners have an outdated, high-touch direct and channel sales and service model employed in acquiring and servicing merchants that has priced the long tail of small merchants out of their reach. Ceding the unwanted smaller offline and emerging mobile and web commerce merchants has precipitated large opportunities at the bottom of the market for companies like Square and Braintree.

Square has a simple offer and a streamlined process for the small offline merchants that need to take credit cards: Register online, verify a bank account, accept a free reader, install the app and accept credit cards at a fixed and predictable 2.75 percent rate. According to a recent research presentation by Managing Director Christopher Brendler of Stifel, “small offline merchants pay as much as 7 percent of each transaction to cover the cost of traditional payment services compared to Square’s 2.75 percent.” Brendler later explained “Square’s promotional fixed pricing plan targets larger small merchants, reducing transaction costs to as little as 1.34 percent. Fixed and simple pricing is not an exclusive to Square with most disruptors offering it.” 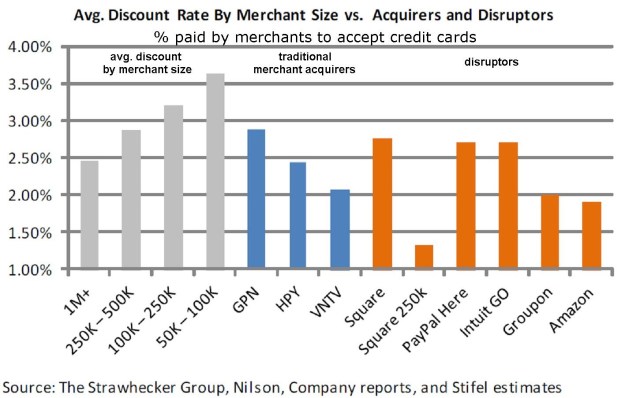 The low transaction fee, called a “merchant discount,” that Square charges merchants is a pricing strategy to acquire merchants and transaction volume but not a long-term advantage. Square’s real advantage is simplicity, consistency and a cleanly designed self-service online account and payments dashboard. Equally as confident as Amazon in its web and mobile service delivery, Square also does not publish a customer-service telephone number.

CEB TowerGroup’s estimate of the “Per-Transaction Costs by Channel in US Banking” below is a good proxy for the potential for improved efficiencies in the merchant acquisition and service channel from Square’s self-service model. 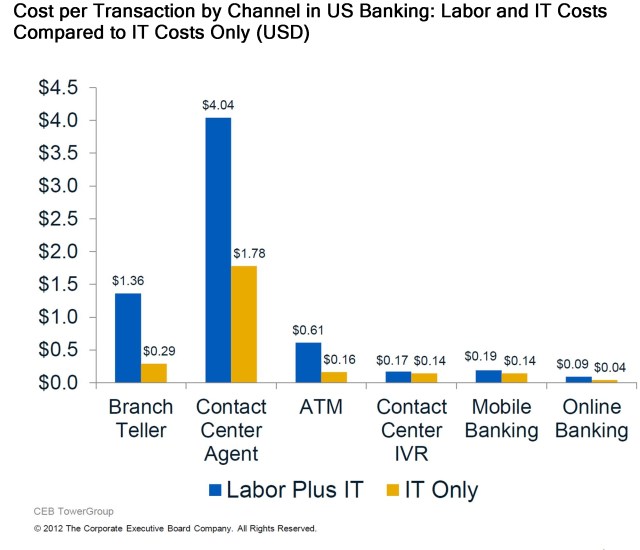 Square’s disruptive advantage is a data-driven approach to the design of web and mobile self-service that measures the customers’ use of its self-service site. Square operates in much the same way as PayPal and Amazon. Web and mobile web sites are instrumented to track users’ behavior as they navigate toward their goal. Each customer seeking a self-service solution leaves his or her footprints, which are aggregated and analyzed to improve the customer experience. Given that PayPal and Amazon have grown to scale without staffing many large call centers is predictive that a disruptor using the best design methodology can create a self-service merchant acquisition and service platform that scales multiple tiers of merchant sizes.

According to Square spokeswoman Faryl Ury, “In 2012 Square grew its customers from 1 million to more than 3 million and is on track to process more than $10 billion in annualized payments in 2013.” If Square keeps 2.5 percent of its total volume this year, that would net $250 million in revenues. While this is impressive growth, Square needs to prove that self-service efficiencies apply to a broader distribution of merchants. Square would not have been valued at $3 billion without the expectation of accelerating growth and significantly improved efficiencies based on the low price-to-sales ratios of traditional payment processors Heartland Payment Systems and Global Payments.

Braintree, like Square, is innovating at Christensen’s bottom of the market. Braintree simplifies the software development efforts to incorporate payments into mobile and web-commerce sites for smaller online merchants. Stripe is in a similar business.

Braintree started its business by attracting small online merchants with merchant discounts similar to Square’s and using an innovative software API that relieved the online merchant of the cost and complexity of regulatory compliance obligations and processing foreign currency transactions. Braintree has won many leading mobile and web merchants, including mobile, peer-to-peer and “collaborative consumption” merchants. The segment of consumers disposed to adopting new products and services delivered via smart mobile devices is more likely to also adopt new kinds of mobile payments. Braintree’s sweet spot is serving a market with both innovative merchants and consumers.

Recently, Braintree released one-touch payments that could be called the “mobile un-wallet.” It is a software development kit (SDK) that will let an online merchant’s customer securely opt-in to use the payment credentials entered for another online merchant provided both are Braintree merchants. So an end-customer that uses Uber who later uses Hotel Tonight can opt-in to pay with his or her Uber credentials.

Square and Braintree’s businesses couldn’t be more different, one serving offline merchants and the other serving online merchants. Like Square, Braintree is well funded. Also like Square, rapidly scaling merchant transaction volumes is an imperative for Braintree, but merchant transaction volumes alone are not the reason it is so well-funded. The reason for this funding is the potential for Braintree to exploit the network effect. If online merchants select their payment services to get access to a large community of active mobile consumers, and if mobile consumers prefer to re-use their mobile payment credentials from trusted merchants, Braintree could capture a large share of the mobile payments market.

The large payment networks, Visa, Mastercard, American Express and Discover have become increasingly open, modular and decoupled to appeal to a broad set of merchant acquirers and payment processors. It is easier to connect to the large payment networks’ strong security, regulatory compliance standards and experience in building and scaling payment-processing systems. Due to pioneering work by PayPal and Square, the underwriting of new merchants to accept credit cards has been simplified to a level where it has been automated. This has made the transmission and processing of payments a commodity business where there are few barriers to entry.

The Internet is flattening the payment networks in the same way TCP/IP flattened the voice and data networks into one and precipitated consolidation. As the Internet is flattening payment processing, the trend to mobile in the post-PC era has enabled developers to innovate with commodity mobile hardware at the point of sale, which had been previously restricted to the limited number of proprietary point-of-sale device manufacturers.

The consolidated payment network will have a more direct distribution model, with startups delivering value to merchants and cardholders through the billions of mobile devices at the edge and the large payment networks at the center, with fewer intermediaries in between. To appreciate the high valuations of these companies consider the shift from checks to debit and credit cards. According to Capgemini’s 2012 World of Payments report North American check payments declined from 52 percent of payments in 2001 to 20 percent in 2009 as consumers shifted from checks to payment cards. The transition from plastic to mobile payments will occur at comparable or faster rates.

Checking accounts are still a viable business and so are Barnes & Noble and Best Buy. But no one wants to be the last man standing in the traditional payments industry.