What if you could actually grasp the sword you pick up in a video game, or if surgeons could feel their robots hit bone? That’s the promise of the Tactilous glove, which won this weekend’s Upverter + Y Combinator Hardware Hackathon. Watch as we demo the Frankenstein-meets-Nintendo contraption that lets you touch objects in virtual reality.

Duct tape, twine, and a whole lot of hot glue. That’s how Jack Minardi and his team forged the Tactilous in just eight hours. Minardi, a Python researcher for Enthought by day, said he gravitated to hardware hacking because “I could tell a computer exactly what to do, but I wanted to be able to tell the world what to do.”

Other teams built gadgets to burn images into toast and more, but Minardi’s squad won an iPad, some Pebble watches, and access to some of Silicon Valley’s top investors. The teammates won’t be quitting their jobs just yet. However, their code is on GitHub, and they’re looking for companies to help them build a second prototype using pneumatic artificial muscles. One day the device could rehabilitate stroke victims.

Strapping this thing on was surreal. As it pulled my fingers back to simulate the resistance of holding a hard object, I had a sudden urge to go on a robotic rampage. Watch up top as the servos fire and actuators tense to let me feel something that doesn’t exist. 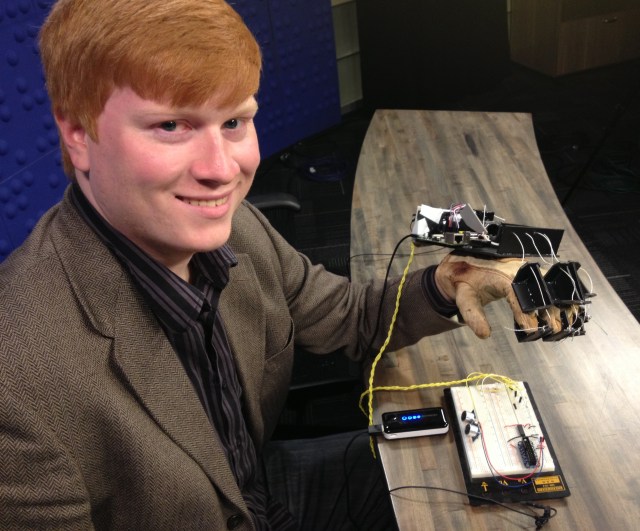