Y Combinator-backed Vimessa launched in late 2011 with a free video voicemail app for the iPhone that allowed users to send high-def video messages to any cell number or email address. The idea was to make video messaging work on any mobile device or desktop. But, despite the early buzz around the product, rules are rules: 90 percent of startups fail.

The nature of its one-to-one viral mechanic meant that it was difficult for Vimessa to build a significant user base and it never found the adoption or revenue companies now need to survive the series A crunch. Because Vimessa — and really every startup ever launched — struggle with the issue of user retention (at some point), co-founders Peter Clark and Cesar Alaniz are today officially announcing Userfox — a service that aims to help startups integrate drip, inactivity and trigger emails.

Essentially, Userfox is, in software-speak, “user retention-as-a-service” for startups. Marketers want ownership over email and because editing messages in Git is no walk in the park, Clark says, Userfox aims to help developers and technical teams focus on the product. Typically, startups use Mailchimp, Sendgrid and just build email solutions themselves, so the goal is to bring those elements together in one place.

Userfox offers newsletter management — like the ability to send newsletters to a particular segment of your audience — along with Sendgrid-style transactional emails, which enable teams to edit and manage templates from a user interface rather than the code base and retention and behavioral email campaigns.

To start using the service, companies add a Javascript snippet to the footer of their pages, at which point they can start creating email messages through Userfox’s dashboard and set up their message triggers, and choose one of the startup’s email themes, or use their own. Userfox will send out welcome emails, inactivity emails and allows marketers to sign in and define rules, like “seven days after a user signs up, send them this,” for example.

“We want to be a more affordable, more design-centric, easier-to-set-up version of Marketo,” Clark tells us. The co-founders want to provide teams with a better (and better looking) alternative to solutions like Marketo, Responsys and Constant Contact — to name a few — by bringing these email types together to give them more control.

These retention-driven emails can “increase engagement by 33 percent, Clark says — plus, it means no more using old email templates or sending emails to users that have unsubscribed, and that’s a positive in and of itself. After all, it’s the little frustrations (and errant emails) that, when taken in aggregate, push users away and add up to higher attrition.

Up until now, Userfox has been in quiet beta, during which it has been sending two million emails per month from “hundreds of customers,” and is tracking “tens of millions of events,” the co-founders tell us. In order to pull back the curtain and accelerate its own early adoption, Userfox has raised $700K in seed funding from a handful of investors, including Y Combinator, Andrew Chen, Point Nine Capital, Yee Lee and 500 Startups, to name a few.

After a free 30-day trial, Userfox’s solution starts at $49/month for 5K messages, a welcome campaign and two custom HTML email themes, and scales up from there at $119/month for “Premium” and so on. Next up, Userfox wants to add A/B testing and API access to propagate data as part of its advanced plans. [More on pricing here.] 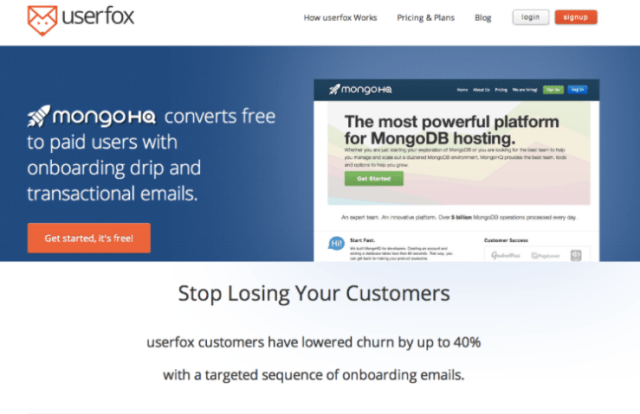