Subscription commerce startup MeUndies has a new look and new products. The company, which provides monthly shipments of boxers, thongs and other underthings, is rolling out a new design for its website. It’s also introducing a new, ultrasoft fabric for its products, as well as a line of other basics, including t-shirts and socks.

For those of you who have been wearing the same ratty underwear for years, MeUndies basically provides a way to sign up and have comfortable, attractive underthings mailed to your door once a month at a reasonable price. Its underwear comes in a variety of styles and colors and sizes, providing the right fit and look for pretty much anyone.

The Los Angeles-based startup just launched a massive redesign of its online store to make way for new products and to improve the conversion rates it sees. The old website had been built by a third-party developer, but for the new design, the company brought development in-house. The idea behind the new design was to make room for new products, as well as improve the order flow and make it easier to add products to be purchased. The old design had a fatal flaw in its checkout page, where if you added items without saving and then tried to leave the page, you would lose your order. That’s no longer a problem. 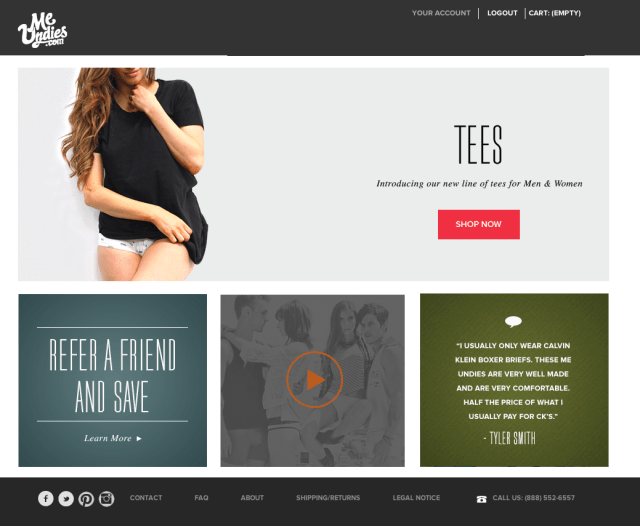 With the new site, MeUndies is adding to its collection of basics, including a line of men and women’s t-shirts, as well as a new line of socks. T-shirts will come in three colors and various sizes. Meanwhile, MeUndies will have an extensive collection of various sock designs to choose from.

The company has also been working on improving its existing products. Launched in early 2012, MeUndies has spent the last year listening to customer feedback in an effort to refine its products and service. The company recently switched to an ultra-soft modal for its men’s products, and it has a whole new line of women’s underwear coming soon.

That was the result of finding that many women were stealing their boyfriend’s clothes. So it switched from the generic, Hanky Panky-style lace underwear to a new, modal-based design that’s similar to its men’s products.

“We want to make such a good product that people are going to tell their friends about it,” co-founder Jonathan Shokrian told me while I was visiting the company’s office/photo studio/fulfillment center. In addition to redesigning its website and its underwear products, the company is also adding new sizes to accomodate customers. That means adding XS, XL, and XXL to its sizing chart across its product lines.

While the redesign should help in conversions and getting people to sign up to its monthly subscription service, MeUndies doesn’t plan to stop there. The company expects to launch a mobile app in the second half of the year to make purchasing its products even easier. It will also be going international, making all its products available outside of the U.S. and Canada. In the meantime, it thinks that having more products to choose from will help grow its customer base and revenue numbers.