Analyst Forrester is predicting tablet ownership in Western Europe will quadruple by 2017 — with the percentage of online adults owning a slate projected to increase markedly from less than a fifth (14 per cent) last year to more than half (55 per cent) in 2017. In 2011 the tablet-owner figure stood at just 7 per cent, underlining how quickly digitally connected consumers are adopting slates. “With double-digit growth in tablet uptake across Western Europe in 2012 and further double-digit growth expected, tablets can no longer be considered a fad,” says Forrester, writing in a new tablet-related research report it’s putting out tomorrow.

The analyst said it expects the consumer-owned installed base of tablets to reach more than 147 million in Western Europe in 2017, up from 33 million in 2012. Its tablet growth forecast is based on a survey of 13,000 consumers in France, Germany, Italy, Netherlands, Spain, Sweden, and the UK. The polled nations with the largest proportion of tablet owners, as a percentage of their total online population, were the Netherlands, with 20 per cent tablet penetration in 2012; Spain with 18 per cent; Italy with 16 per cent; and the U.K. with 15 per cent. France was lowest with just nine per cent.

In a preliminary version of Forrester’s tablet report, seen by TechCrunch, a few observations stand out — including a downward shift in the age-range of the largest group of tablet owners, shifting away from 30- to 40-year-olds to 18- to 24-year-olds. The analyst found a quarter of online adults in the 18- to 24-year-old category owned a tablet in 2012. The shift towards more younger tablet owners may accelerate in future — Forrester points to the rise of “competitively priced” Android powered tablets in the sub-€250 category, such as Amazon’s Kindle Fire and Google’s Nexus 7. And since tablet ownership increases with income, according to Forrester’s findings, and the young are keenest on owning a tablet, then cheaper Android tablets which are half the price of Apple’s iPad are likely to be helping to drive adoption lower down the age range, to users who previously may not have had the disposable income to afford an iPad. As well as Android-powered slates stepping into that pricing vs demand gap, Apple also came out with the smaller, cheaper iPad mini last year. Yet more fuel for the tablet fire.

While the young are the keenest on tablets, Forrester said they are by no means the only age-group with an interest. Nearly one in six European online consumers aged 65 or older already owns a tablet, according to the report.

Despite the rise of cheaper slates, price remains a considerable barrier to tablet entry for a big chunk of online European adults — Forrester found that around a third of those polled are not planning on buying a tablet due to price (and regardless of income) — suggesting lots of potential tablet owners still have trouble justifying the purchase of an additional gadget, on top of their smartphone or PC.

When it comes to tablet usage, Forrest found that tablets are unsurprisingly most used in the home — specifically the living room, bedroom and kitchen, whereas smartphones have a much wider and more consistent distribution of usage (as illustrated by the graphic below). The living room and the bedroom are the only two locations where polled tablet owners chose their slate over their smartphone. Or, in other words, the most used gadget is the gadget you have in your pocket. 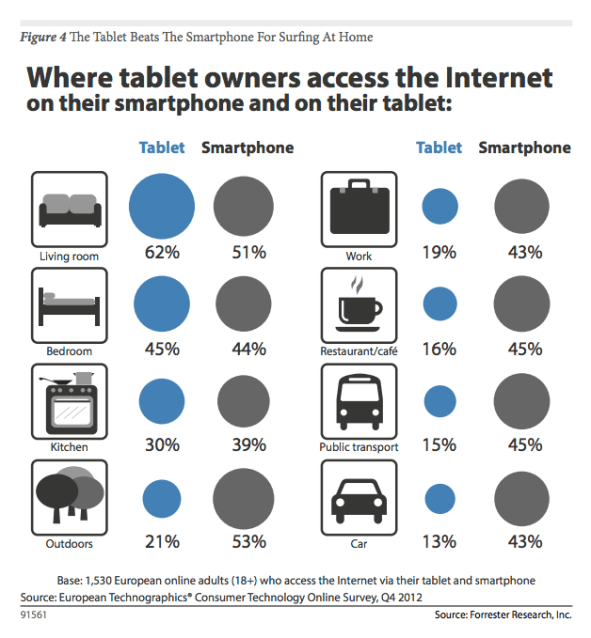 According to Forrester, the main usage activities for tablets are accessing the Internet, emailing, social networking, playing games, and viewing pictures. It also found that tablets are not the highly personal devices that smartphones are: of the tablet-owners who have a spouse/partner, 63 per cent said they share their tablet with them, while one-third share it with their children — making tablets “a far more social device than smartphones”, according to the analyst.

“Tablets are social devices mostly used in the digital home,” said Thomas Husson, analyst and co-author of the new report, in a statement. “Companies that want to exploit tablet opportunities need to understand they require a differentiated approach from smartphones.”

The report also underlines a ‘halo effect’ for smartphone makers who also sell tablets. Forrester identified a general allegiance among smartphone owners to their phone’s brand when choosing a tablet — especially pronounced for iPhone owners but not limited to Apple’s hardware. The report notes:

However the analyst says what’s true for the current crop of (still early adopter) tablet owners, won’t be true as tablet ownership expands to take in a greater proportion of the population. “We are still in the early-adoption phase of tablet ownership, so the next wave of tablet owners will not be as eager; to convince them to adopt a tablet, marketers will need to stress attributes like accessibility, ease of use, and relevance,” says Forrester.

The analyst believes tablets are likely to expand their usefulness beyond the living room/bedroom in the near future, with usage patterns being shaken up by a variety of factors including enterprise/workplace adoption of tablets; the diversification of form factors (such as smaller tablets and phablets, touchscreen laptops and “netvertibles”, hybrid devices and other new forms); as well as the roll out of 4G cellular services and more cellular data bundles.

Likewise, tablet usage will be dictated by form factor — so usage patterns may also shift, as tablets migrant to other locations. “A tablet with an attachable keyboard will encourage greater usage of email and work-related applications; and while not a pocket-size device, a 7-inch tablet will encourage greater portability,” the report notes.